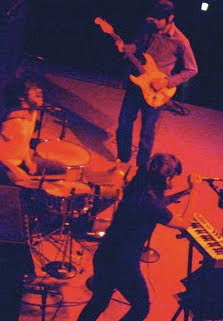 O'Malley recalled some of his early discussions with Wright on the sound of Sex Bob-Omb. He said he tried to sell the director on Times New Viking, a Midwest punk band signed to Matador and steeped in rudimentary, low-fi noise. Wright, however, wasn't having it, at least not until the pair met with Beck in his tour bus at San Francisco's Outside Lands music festival.

"Edgar wasn't completely taken with them," O'Malley continued. "So we start down with Beck, and the first thing he said was, 'I think they should sound like Times New Viking.' So Beck totally understood what we were going for. Edgar and I just kind of looked at each other."

—From Todd Martens' article on how director Edgar Wright went about finding the right sound to give Sex Bob-Omb in his film adaptation of Bryan Lee O'Malley's Scott Pilgrim series, from the LA Times' Hero Complex blog.

Columbus readers may recognize the band name Times New Viking, as the "Midwest punk band" is actually Columbus-based (That's them above, playing at the Wexner Center in 2007).

You can hear a handful of their songs here ("My Head" is my favorite).

And you can see the unfortunately Times New Viking-less but (otherwise quite strong) soundtrack play list on blog The Playlist, and check out Bryan Lee O'Malley's discussion of who picked what and why on his blog, Radiomaru.com.
Posted by Caleb at 8:25 AM