Classic Popeye #3 (IDW) The cover story, from which the above panels were scanned, is "Ghost Island," in which Popeye is hired/coerced into delivering a shipment of ghost traps to Ghost Island, which has become overrun with ghosts...ghosts being, of course, one of the few things that Popeye refuses to tangle with.

These ghosts are drawn to resemble people-sized bowling pins, with black dots for eyes and no other features. They're form of haunting consists mostly of milling around, being annoying and saying "Boo."

That story is followed by another story in which Popeye gets in trouble with the law because he's mysteriously punching everyone he sees in the face.

The stories are by Bud Sagendorf, and thus aren't the top-shelf Popeye comics—that is, they're not E.C. Segar's—but they are comics from the shelf right below the top shelf.

Daredevil #19 (Marvel Entertainment) I'm leery of saying just about anything about this issue, even the vaguest of statements, for fear of ruining the great surprise writer Mark Waid pulls off in it. This is the issue that explains exactly what's been going on to make Foggy Nelson think Matt/Daredevil has finally and completely flipped his lid (and make Matt begin to wonder if his old pal might be right), and, once you learn it, it's pretty clever—but I was most impressed with Waid's ability to pack in a surprise, given the fact that...um...so much has already been revealed about the upcoming conflict in the solicitations for future issues.

That is, Waid managed a neat surprise, and he did so by putting a surprise in a place one wouldn't expect to see a surprise...which I'm afraid I've kind of shorn the edges from simply by acknowledging its existence.

But you've already read Daredevil #19, right? I mean, you're presumably reading this column because you like super-comics, and, after a rocky patch or two with the changing artists before Chris Samnee became the regular, monthly artist, Daredevil is one of the very best super-comics being published today.

Hawkeye #3 (Marvel)Here's the third surprisingly great done-in-one issue of a comic about stupid fucking Hawkeye, thanks to the incredible creative team of Matt Fraction and David Aja.

This issue is kinda sorta a guided tour of Hawkeye's quiver full of trick arrows (Hey, which archer started using trick arrows first, Green Arrow or Hawkeye...? Just wondering which publisher ripped off which), as Clint Barton leaves the house to buy tape in order to help Kate Bishop properly label all of his trick arrows, and ends up getting involved in a big car chase and battle with those guys from the first issue who say "bro" a lot. Before using any of these arrows, Aja always inserts a close-up, diagram-like drawing of the various arrows' tips.

It's pretty damn close to being a perfect comic book, if you don't mind a bit of superficiality in your comic book reading (That is, Hawkeye is a comic book about nothing more than being an awesome comic book; the incredible talent, skill and craft that went into its creation apparently being the point of the endeavor, while the content is otherwise simply bad action movie plot devices).

Oh well. Remember what I said about Daredevil being one of the very best super-comics...? Well, here's another one. 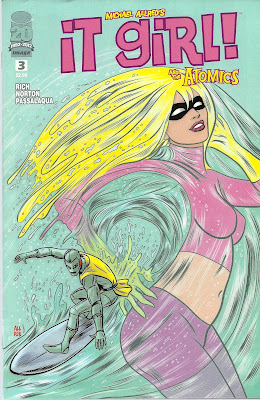 It Girl and The Atomics #3 (Image Comics) Artist Mike Norton is still hitting it out of the park in this third issue, but Jamie S. Rich's writing's not really doing anything for me, and I'm really wavering pretty hard between buying #4 and not buying #4. He's essentially going for an old-school superhero comic book vibe, like, Bronze Age Marvel and DC sans narration boxes and though bubbles, but with just about everything those publishers published pretty readily available in trade paperback collections, I'm not sure what the point of reading something so similar created in 2012 is. Generally with Allred's work, even at it's most nostalgic, its elevated by Allred's artwork—Norton is great, but his drawings here don't transcend the genre conventions in the same way that these characters' creator's does.

I don't know; I'm having trouble articulating exactly what it is that I don't like about this comic book series, but I don't really like it. Certainly not as much as I expected too.

Saucer Country #8 (DC Comics)Those banner ads that run across the top of all of DC's goddam comics now, the one's advertising Arrow "Wed 8/7c The CW TV Now New TV Series" sure ruin the covers of, like, everything DC is publishing but, on the bright side, since they're selling ads right there on the cover, they've been able to significantly lower the cost of buying their comics since...Oh wait, no, these things still cost the same three dollars they did before they started putting ads for CW TV shows right on the cover. So I guess those are just house ads...? Barf.

As for Saucer Country, what's getting really, really weird about this comic is the deja vu I have while reading it. Like the anecdote on page 17? I've read that anecdote repeatedly, although now I'm not sure where (Pretty sure Annie Jacobsen's mostly-sober Area 51, written about at length in this postand/or Jerome Clark's UFO Encyclopedia). Is it cool for writer Paul Cornell to take an anecdote straight from UFO folklore (UFOlkore?) like that and insert it into his fictional comic book? It doesn't really upset me, but it does make me feel weird...I mean, right after the character cites that anecdote as an experience of his own, he alludes to disinformation campaigns.

I don't know; a fictive comic book series weaving readymade fictions, facts, fictions-presented-as-facts and facts-hidden-as-fictions into its narrative...? Sometimes this comic makes me a little dizzy.

I'm reading it serially, but if DC ever collects it into a very thoroughly annotated edition, I'm probably gonna be all over that.

Wonder Woman #13 (DC) Artist Tony Akins and co-inker Dan Green handle all of the interior art this issue, in which a scarred, naked, hairy giant who I hope isn't meant to be Orion eats a dude's brain in order to communicate with humans, half of the Olympian gods have a pool party and Wonder Woman goes looking for a half-sister who has a very similar name and power-set to an Iranian DC superhero who was presumably de-created in the New 52boot.

A 12-issue story arc just ended, and this issue seems to be a transitionary one, carrying the dangling plot threads from that storyline into the next arc, while introducing new characters and plot threads.

It's fine. That Damn Arrow sure screws with what otherwise would have been a pretty fine cover, though...
Posted by Caleb at 7:29 PM

"Green Arrow's famous trick arrows were not part of his original schtick. The first to appear, the boomerang arrow, showed up in Adventure 108 in September 1946. The most famous, the boxing glove arrow arrived a few month's later in Adventure 118 in July, 1947."

The Green Arrow blog The Arrow Cave say the first appearance of a trick arrow was in More Fun Comics #77, cover-dated March 1942. So not quite part of his original schtick, but pretty close.