Remember, at the end of the day, this is what Comics is really all about: 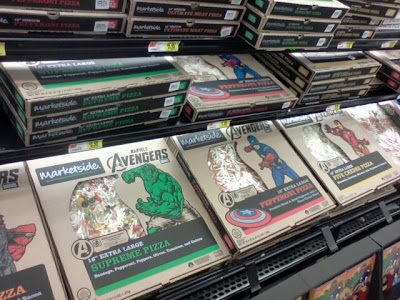 I love that Iron Man has his hand up, palm open to make sure we know it's a five cheese pizza. Not four or six, but five.

I still think Wal-Mart should have added schwarma for this promotion.

It's unfortunate that Thor and his Ultimate Meat Pizza were left out of this photo.

I think it more unfortunate still that the adjectives weren't "Incredible," "Invincible," "Mighty" and um...hey, Captain America doesn't have an adjective to call his own like so many other Marvel characters...? That's unfortunate too!