I know I shouldn't laugh at the misfortune of others... 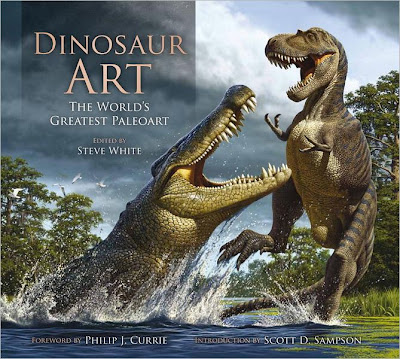 ...even those who are long-extinct, but I found the cover image of Dinosaur Art: The World's Greatest Paleoart hilarious. It's that WoahHeyHolyShitAAAA!!! face on that Tyrannosaurus Rex, its stumbling half-jump, half-faint and the pratfall-like set-up of the piece; the implication that the split-second before that image, the T-Rex was all walking along the water's edge, thinking he's the invincible top of the food chain and, next thing you know, "Aaa! Where that giant fucking crocodile come from?!"

Oh, it's a pretty nice painting, too.

I borrowed it from the library on the strength of the cover image, and tried really hard to read the book, but it was crazy wonky; in addition to a collection of great "paleoart," it consists of Q-and-A interviews with the artists, and these are all artists/scientists, and they talk like it. I'm familiar enough with art that I can kinda sorta follow discussions of that end of things, but my casual interest in dinosaurs was no match for the science talked about here.

The only part that really grabbed me was the introduction, a brief history of the evolution of paleoart, and the transition of human understanding of dinosaurs as huge, dumb, slow-moving, cold-blooded, swamp-dwelling reptiles to the dynamically varied, agile, probably warm-blooded class of creatures we now consider them to have been.

I would love to read an entire book on that particular aspect of dinosaurs—a sort of cultural history of popular cultural conception of dinosaurs and how it has changed over the decades in science and fiction and film and art(centuries, I suppose, although a few centuries ago we didn't really know what dinosaurs were, despite seeing their bones and suchlike). Someone should really get on that.

Have I got the book for you! Try the Dinosaur Heresies, by Robert Bakker. He's one of the first Paleontologists to put forward the idea of warm-bloodedness and the idea that birds are basically dinosaurs as well.

It's VERY well written, funny and just a great book.

The T-Rex in that painting reminds me a lot of the T-Res in Ryan North's Dinosaur Comics, specifically the way he's depicted in the second panel.

That's weird. I've looked at that book a couple times as a kid, based on the cool cover image, but it always looked a little more science-y than I would be able to handle at the time.

And in the introduction to this book, the writer mentions "dinosaur heresies," not the book, but the term.