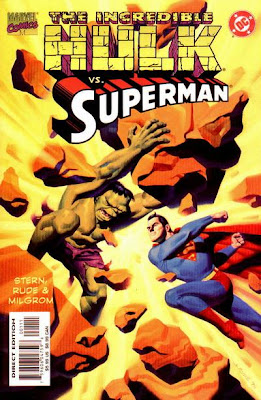 Is there no one in the entire universe capable of stopping the Hulk?

Not in the Marvel Universe, anyway.

But the next universe over? The DC Universe? They've got some guys who can probably take the Hulk. 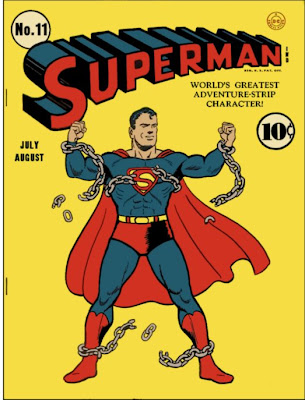 Despite their residency in two different fictional universes, and the fact that they're both owned by different companies, the Man of Steel and the Jade Giant have traded blows on a couple of occassions, including one that didn't really kind of suck.

Of course, it was the mediocrity of Green Lantern Kyle Rayner and Silver Surfer flying through space together or Superman teamimg up with the Fantastic Four that made the really good crossovers stand out, and chief among these were the JLA/Avengers story, which gets a million points for thoroughness (Kurt Busiek basically just found ways to have George Perez draw every single Avenger, every single Justice Leaguer vs. every single Avenger and Justice League villain ever, guest-starring everyone in both universes), and this Superman vs. Hulk comic.

While Stern's script does a good job of nailing the traditional Silver Age sounding character dynamics and dialogue of the Superman cast, without making it seem overly dated or kitschy, and he manages to weave the Hulk and his characers into the story in a coherent way, it's really Rude's book. He and Milgrom make this truly something special, as he draws the Hulk like the old, original Jack Kirby and company Hulk from the misunderstood monster's earliest adventures, and his Superman seems to have flown in from one of his own Fleischer cartoons.

This book doesn't simply go through the motions of blending the two franchises casts, it actually blends their aesthetics, and rather than featuring the characters as theyw ere currently appearing in their monthly comics, Rude, Stern and company chose high points in their existence during which to blend them (Why does this matter? Well, try re-reading DC vs. Marvel today; it's billed as "The Showdown of the Century," but it's hard to get past more than a page without wondering why Superman has a mullet and Namor a pony tail, or what Spider-Man is wearing, or where Aquaman's hand is, or just who the hell that weird-looking dude with Thor's hammer is supposed to be).

Also, Superman and the Hulk fight a couple of times. And it is totally awesome.

It's also the subject of this Friday's fisticuffs. That's right, it's Friday night, and that means it's time for Friday Night Fights. So enough talking, let's go to the scans for some hitting.

Remind me Stargirl, what round is it?

So it's afternoon in Arizona, and a hungry Hulk smells some barbecued chicken on the grill, and crashes the party, helping himself to a couple fistfulls of bird, when who should show up to insult the Hulk's table mannbers but our good friend... 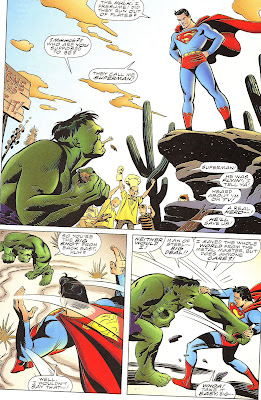 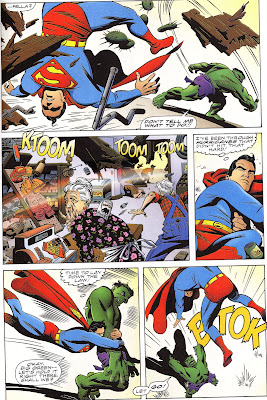 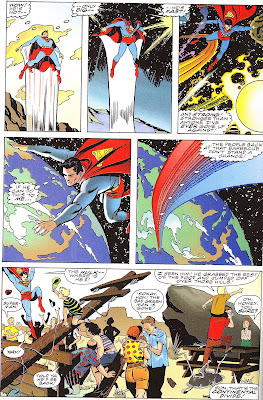 ...he shrugs it off all the way into orbit! When Supes finds his way back to the scene of the brawl, the Hulk has already leapt away, their first fight ending in a draw.

A Thunderbolt Ross/Luthor team-up, a fake Hulk robot and a seemingly imperilled Betty Ross later, Superman catches up with the Hulk again... 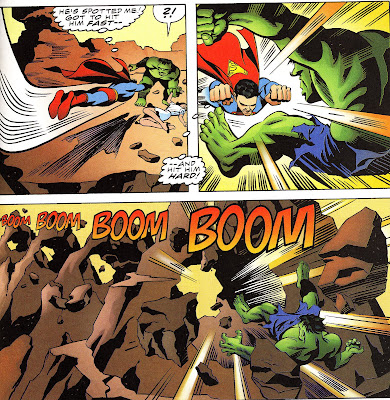 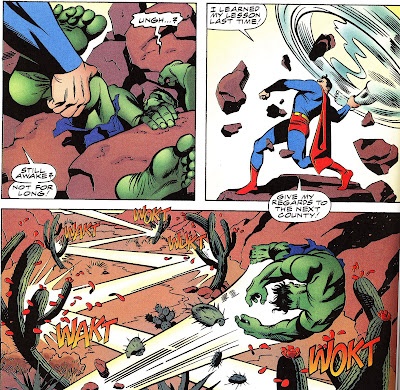 I'm pretty sure that's the most painful panel I've ever read. My back hurts just looking at it.

Anyway, apparently inspired by being bounced off of every cactus in the county, and seeing Superman headed his way, Hulk does the most sensible thing to defend himself: 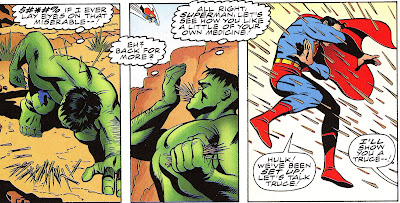 He stuffs his mouth with cactus spikes and spits them at Superman hard enough to put the Man of Steel on the defensive.

By this point, Superman's noticed that the Bad Hulk was really a robot wearing purple pants, while as the Good Hulk is clearly wearing blue pants. Clearly their conflict has been a big misunderstanding, and Superman would prefer to cease hostilities to discuss the matter.

Hulk would prefer to beat the crap out of Superman, however, so he attempts to commence with the smashing.

In mid-smash, however, General Ross orders a bombardment of the pair, and they crashland into a truck full of missles. After breifly outlining his opinion on the Cold War arms race in panel three, Hulk forgoes more cactus needles for heavier artillery in panel four, perhaps the greatest image of the entire book: 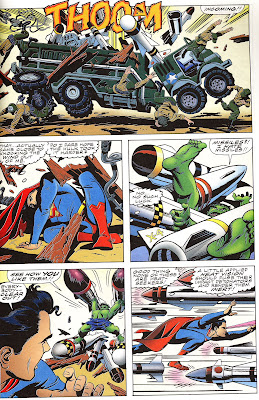 So Superman punches the Hulk through an army jeep and into a mountain, burying him under tons of rocks. That should be enough to stop the Hulk, right? 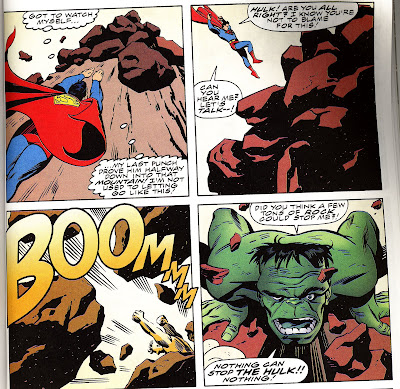 Apparently not. As the two titans grapple once again, Luthor convinces Ross to activate the Gamma Gun, a weapon designed by Bruce Banner that hurts them both long enough for the two heroes to compare notes and decide to join forces against Luthor and the U.S. military industrial complex.

So at the Hulk's request, Superman throws him at the Gamma Gun, which he proceeds to smash.

And thus ended the greatest battle between the Hulk and Superman ever. Who would have won if Superman weren't holding back so much there at the end, or if Luthor and Ross didn't cut their battle short with the Gamma Gun?

The world will probably never know (But it would have been Superman).

Sentry, I do hope you were taking notes.
Posted by Caleb at 8:08 PM

If anyone can take the hulk, she can.

I have to agree- in the years that my collecting has lapsed (due to too much mulleted supermen and roided out hulks etc. on the shelves)
this single issue is one that really stands out.

It's alot like Steve Rude's Brave & the Bold work, but he's amped up the Kirby/Simon studies to near perfection (while maintaining his own style, more often than not).

John Romita Jr.'s artwork in the 2nd World War Hulk issue similarly gets the point that the Hulk's sheer mass (not so much steroid-muscularity) and child-like face belie a cunning and intuition that lend an element of surprise to his fights.

Everyone assumes he's dumb- but he's quicker to react than one might expect from looking at him. Superman falls for that in this book and I love how they play it off.

I only hope that Greg Pak finds a way to round this one off without giving into killing off major characters- b/c so far he's building more interest in the Hulk than has existed for quite some time.

Hulk would have won. No contest.