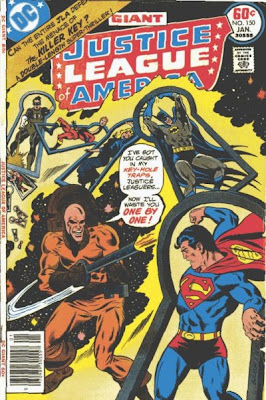 Justice League of America #150 (1978); “The Key—Or Not the Key,” by Steve Englehart, Dick Dillin and Drank McLaughlin 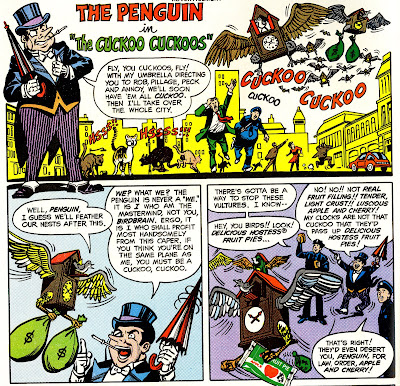 We open in Gotham City, where the Penguin has these neat cuckoo clocks terrorizing the city. The clocks get greedy, and Penguin shows ‘em who’s boss, giving the cops time to give the birds Hostess Fruit Pies, with which they fly off…the day is saved! 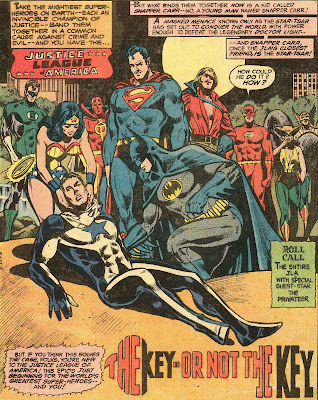 Meanwhile, the Justice League and their gay pirate friend The Privateer have found that their enemy known as the Star Tsar (ugh) is really their old ally Snapper Carr! 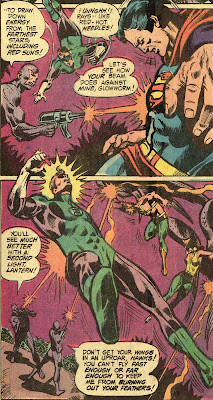 When Snapper’s teammates the, um, Star Lords appear, they’re able to totally KO all of the assembled heroes.

Realizing that the team with Superman, Wonder Woman, Green Lantern and the Flash just doesn’t stand a chance against guys with laser guns, the Justice League calls in their entire roster…even The Phantom Stranger! 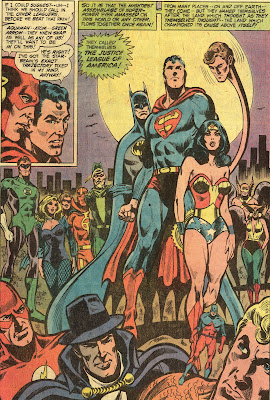 Who, as usual, doesn’t have time for this shit… 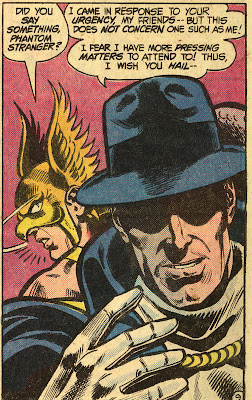 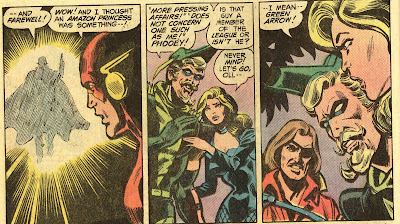 See Leaguers? That’s why you don’t use your first names when in costume. You might accidentally give someone’s real name away to an acquaintance whom you think is a fellow hero but, a few pages later, turns out to be a villain.

So the Leaguers split up (duh) and most of them follow Snapper’s energy trail to a hidden island, where they are captured by the Key, who explains how he didn’t actually die that one time they thought he died.

Actually, the Key explains a lot more than that. 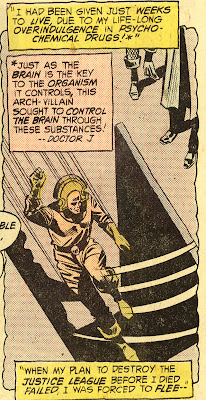 Cool! The Key is powered by drugs! Hawkman, weren’t you listening? His power is drugs.


Meanwhile, the others travel to Happy Harbor to check up on Snapper 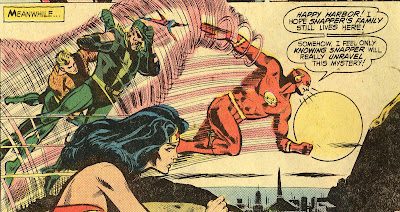 via what must be the absolute worst way to travel imaginable. I assume there’s a panel of Aquaman, Atom and Green Arrow throwing up that got cut from the story for space.

They’re at the Carr residence, where Mr. Carr tells them to drop dead, and slams a door in their faces. Snap’s little sister Janet appears, and summarizes Brave and the Bold #28 and JLoA #114, in which Snapper turned on the League in a plot initiated by the Joker and the space gladiator Anakronus attacked the Carrs.

Janet then goes on to tell of Snapper’s crushingly depressing post-mascot life, in which he finds him self doomed by his association with the League (Speaking of which, you may want to hit the back issue bins for Hourman #16, which retells the Snapper/Joker story from Snap’s perspective, with the added benefit of Rags Morales art…actually, while you’re in the bins, you’ll probably want to read Hourman #1- #25; the whole series is fantastic).

Just as Janet gets tot the part where Snap moves to NYC and drops out of contact with his family, the Star Tsar appears on a flying space-bike shouting “Die, Justice League!” and shooting a laser cannon that goes “Faz, Faz!”

When he sees Janet, he flees, and the Justice League pursues in Wonder Woman’s invisible jet (Wait, why didn’t they ride with her on the way there, instead of inside a Flash-created tornado?)

So anyway, this faction of Leaguers breaks into the Key’s fortress, only to get their asses handed to them by a blast of stellar energy, and they’re captured too, imprisoned in these stupid things:

And there, while helpless, Snapper, who is now also imprisoned, continues to tell them of his times down and out, wandering the streets of New York, where he met The Key: 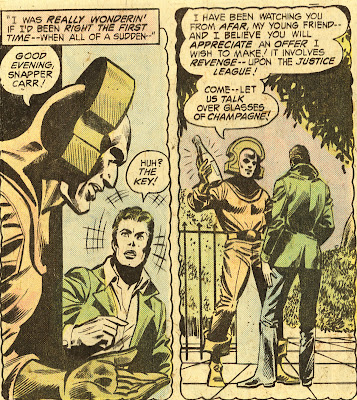 You know, whenever older men accost me in the park at night and offer me a drink, it’s never about revenge against our enemies…

Together, The Key and Snapper cook up an elaborate scheme involving more than one Star Tsar, but Snap’s heart just isn’t in it, which is why the Star Tsar that isn’t him blasted him too and stuck him in a neon keyhole cell, which the Flash is able to vibrate free from.

And then things get really awesome.

This may just be the best panel ever. I count five Justice Leaguers who can fly here, another that runs at super speed, a couple who like to travel by grappling hook, plus a stretchy guy, and they’re all just walking up the stairs, single file.

This might just be the dullest thing the JLA has ever done—walked single file up a few flights of stairs together.

Man, I want a poster of that.

At the top of the stairs, they see the other, not-Snapper Star Tsar, and Batman readies a Bat-right hook. 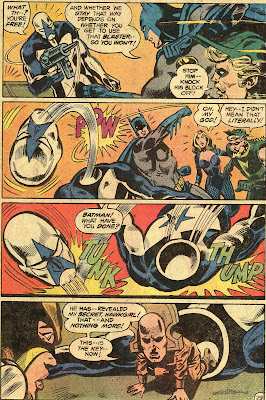 I love the fact that Black Canary and Green Arrow immediately just freak out, and someone was like, “Batman! What have you done?”

As if they see Batman punch the Star Tsar’s head off and their immediate conclusion is that he just completely, bloodlessly severed a dude’s head with his fist. I'm not sure if this speaks more to Ollie and Dinah's ignorance, or their awe over how tough Batman must be.

Then, things get weird: 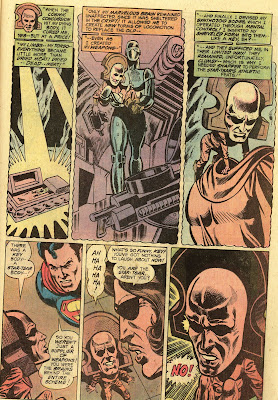 Yes, the Key’s body has wilted, so now he has a full-size head and a tiny, tiny body. The message? Just say no, obviously.

But the Key had another partner in this scheme besides Snapper—or have you forgotten the Justice League’s gay pirate friend who has been suspiciously absent for pages upon pages?!

Well, the League sure did. All of them except Red Tornado, who’s objective android senses didn’t record him during the whole key hole captivity portion of their adventure, which can only mean one thing. Yes, dude’s a total bad guy, which we’ll let him explain himself. At length. 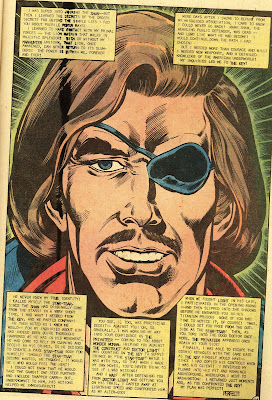 Holy shit! Did you see that? Look! Now that’s a lot of words on a page! Eat that Bendis!

As the team heads back to the Satellite for milkshakes, Red Tornado pauses to revel in The Privateer’s downfall, and his own part in it.


And thus Red Tornado learns that though he is an android, he too has the capacity to be an asshole, which brings him one step closer to being a true Justice Leaguer.
Posted by Caleb at 11:57 AM

But the Stranger *did* have time to intervene to help the League against the Key back in #110!

But he'd just appeared in 145-46 (#145 being the ultimate Stranger-JLA issue), so I guess they decided a third time in six months would be overkill.

150 was one of the greatest issues of the Satellite Era; thanks for the recap...

Those stairs are M.C. Escherrific!

Too awesome! That was one of my favorite issues ever! Dick Dillon was awesome if inconsistent. I think he died a few months after this came out. The Star Tsar was a mess of a storyline but man, good times...good times...