If you read through Marvel's solicitations for comics they plan to ship in April (which you can do by clicking here), you'll see repeated references to "Thor Goes Hollywood Variant by TBA" in many of the individual solicitations.

What exactly would a "Thor Goes Hollywood" cover image look like? Photo covers featuring characters from the movies? No. If the single example posted among the solicitations available on Newsarama.com is any indication, the covers will feature Thor fighting the title characters of other movies, like Greg Horn has him doing in this image: 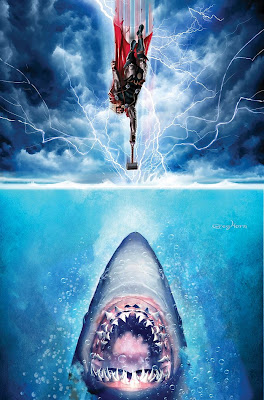 (It would have been even cooler if he were swimming, like in the movie poster) While I can't imagine chasing any of these variants, as a wacky theme, Thor/film mash-ups has some potential, along the lines of those "Wolverine Art Appreciation" covers.

I guess it depends on how specific they get with their references, how imaginatively they choose movies (or will it just be movie posters...?) to throw Thor in to and how well executed the art is.

I'm certainly looking forward to seeing what the rest of them end up looking like.

As for the rest of Marvel's April plans, well, let's take a look...

Wow, those both sound really great—I’ll be sure to add them to my pull-list. 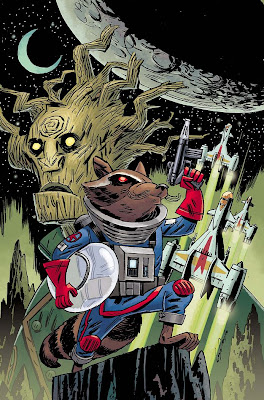 ANNIHILATORS #2 (OF 4)
Written by DAN ABNETT & ANDY LANNING
Penciled by TAN ENG HUAT & TIMOTHY GREEN II
Cover by ALEX GARNER
Variant Cover by GUY DAVIS
They’re back: The Spaceknights and the Dire Wraiths! As the Wraith’s deadly Black Sun ascends and their foul magicks return, the home world of the SpaceKnights looks as if it will be the first planet to fall to their might! Only the awesome Annihilators, the newest and most powerful Marvel team of all, stand between the Wraiths and total galactic conquest! Meanwhile, Rocket Raccoon races to Planet X to rescue his old buddy Groot. But what is the secret from Rocket’s past that is coming back to haunt him? All this, plus a variant cover by B.P.R.D.’s Guy Davis!
48 PGS./Rated T+ ...$4.99

High on the list of things I never thought I’d see is Guy Davis drawing Rocket Raccoon and Groot on the cover of a comic book.

I hope the back-up either gets collected into its own trade or one-shot, or, at the very least, gets included in an Annihilators trade collection. 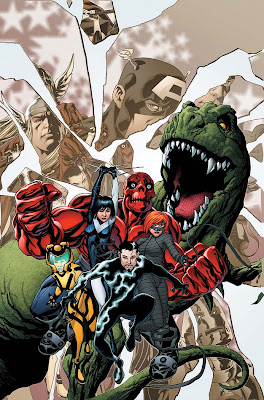 Hey look, there’s a dinosaur on the cover! Is that just that Reptil fellow, or do the gang fight a dinosaur in this issue? Dinosaurs always pique my interest. 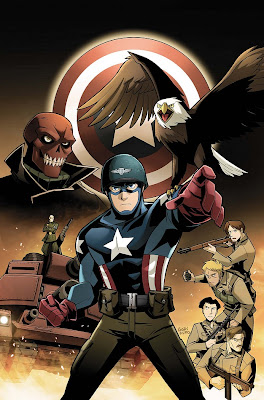 CAPTAIN AMERICA: THE FIGHTING AVENGER #1
Written by BRIAN CLEVINGER
Pencils by GURIHIRU
Covers by GURIHIRU &
BARRY KITSON
Captain America’s Day One!
He’s got the strength. He’s got the training. But has he got what it takes? A ragtag Special Forces unit takes Captain America on his first mission of World War II. Their orders? Don’t get him killed! But when the low-profile assignment draws the attention of Baron Strucker, the future Red Skull and half the Nazi army, it’ll be a crash course in super heroics for Marvel’s first Avenger!
48 PGS. /One-Shot/Rated A ...$3.99


FEAR ITSELF #1 (of 7)
Written by MATT FRACTION
Pencils & Cover by STUART IMMONEN
Variant Covers by STEVE McNIVEN & STUART IMMONEN
Fantastic Four Anniversary Variant by PAOLO RIVERA
Blank Variant Cover Also Available
DO YOU FEAR...TOMORROW?
In this time of global anxiety, of economic turmoil and mass hysteria, Sin, the new Red Skull, has made an awesome discovery...a shameful secret that will rock the foundations of the Marvel Universe! A revelation that will divide father and son, turn friend against friend, and herald the rise of Fear personified. HE IS RETURNING...and the world has nothing to fear but FEAR ITSELF. Matt Fraction and Stuart Immonen bring fans the biggest Marvel the biggest Marvel event since CIVIL WAR!
56 PGS./Rated T+ ...$3.99

I suppose it’s the extremely vague wording in the solicitation, along with the undisclosed premise, and the fact that almost everything mentioned sounds like something I’ve already read in a big Marvel comic book from the last half decade or so, but I can’t really get excited about this thing.

Yeah, I’m glad it’s not another Bendis-written story, and I like Immonen a whole lot, but I don’t know…I can’t feel any heat here. Maybe I’ll get more excited the more I learn about it.

Check out that price though…is that a misprint? They’re really giving away almost three times as much story than they usually do for $3.99? That makes a purchase seem a lot more appealing…and paying $4 for one of their 22-pagers a lot more unnecessary feeling. 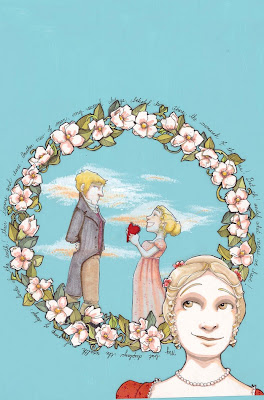 
INVINCIBLE IRON MAN #503
Written by MATT FRACTION
Art & Cover by SALVADOR LARROCA
Thor Goes Hollywood Variant by TBA
FEAR ITSELF tie-in!
Fear has spread across the land and has made its way to Broxton, Oklahoma. As the Broxton residents prepare for a major disaster, Iron Man and Stark Resilient head into action. On the eve of this cataclysmic event, the Armored Avenger will face many dangers, but the greatest danger of all will be facing Fear Itself in this tie-in to the biggest Marvel event ever!
32 PGS./Rated A ...$3.99

What the…now Fear Itself isn’t just as big as Civil War, it’s “the biggest Marvel event ever!”


THE MIGHTY THOR #1
Written by MATT FRACTION
Pencils & Cover by OLIVIER COIPEL
Variant Cover by TRAVIS CHAREST
Variant Cover by WALT SIMONSON
Blank Variant Cover also available
Thor Movie Variant also available
It’s a shining, golden, new age for the Thunder God and Matt Fraction and Olivier Coipel are back to lead the charge! Thor and Sif dive deep into the heart of the fractured World Tree to reclaim an artifact from beyond time and space, an artifact that attracts the attention of the Silver Surfer. And when a herald such as he arrives on Earth, the arrival of his master is certain to follow. Prepare for the return of the World Eater...prepare for the return of Galactus! Fans can’t miss an all new behind the scenes look at the highly anticipated major motion picture with a sneak peek at some of the art!
32 PGS./Rated T+ ...$3.99

This sounds a lot like what they did with Iron Man around the time of his movie—launch a new flagship book for the character with a new #1 with the intent of giving potential new readers curious due to the movie and it’s accompanying push of the Thor character and concept a book to be pointed at. The Mighty Thor #1 sure sound a lot more appealing than Thor #621 (Especially when you consider the fact that the current main Thor title consists of issues #1-29 and #600-#621…with no issue numbers between 30 and 599, because modern direct market comic books are insane and impenetrable to all but the most devout).

Of course, this week Invincible Iron Man, the book this one seems to be patterned off of, just made its own insane jump to #500 after thus far bearing consecutive issue numbers, so maybe in a few years The Mighty Thor will be just as difficult to jump in to as Thor is today… 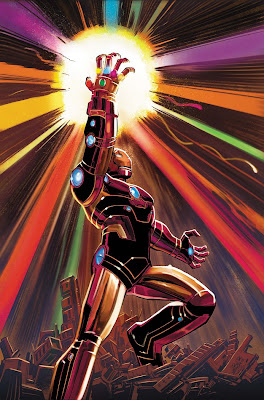 Man, I love John Romita Jr. art…! This is from New Avengers, one of the two Bendis-written comics I was curious about in this month’s solicitations and plan to read in trade eventually (Ultimate Comics Spider-Man, to answer your question). 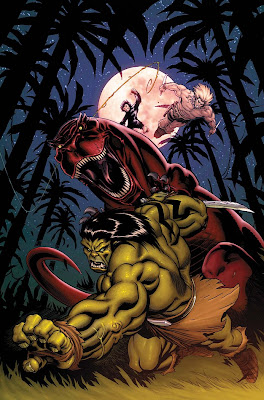 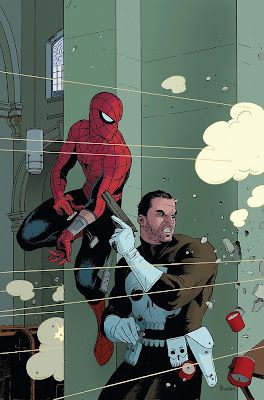 SPECTACULAR SPIDER-MAN #1000
Written by JOHN OSTRANDER
Penciled by MICHAEL RYAN
Cover by PAOLO RIVERA
Spider-Man and the Punisher take on the Russian mob! Vast amounts of drugs from overseas are flooding the streets, and the Punisher is ready to kill to stop the flow. But Spider-Man has a different approach...and when a Midtown High student gets caught up between the two crimefighters, it could mean life or death!
56 PGS./Rated A ...$4.99 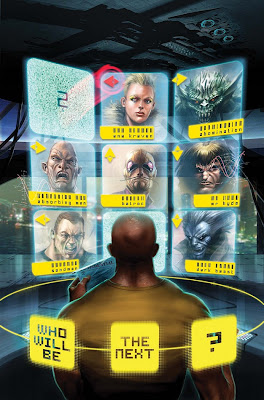 Hopefully Batroc, because the rest of those guys are pretty boring. 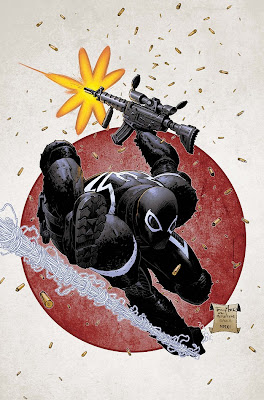 The new Venom sure is flexible!

I guess it’s kind of funny that he has a machinegun that he’s firing while striking that classic-ish McFarlane pose.
Posted by Caleb at 7:48 PM

The annihilators series is oddly a 20 page feature story with a 22 page 'backup'. So the groot/rocket raccoon story will definitely be long enough to be in a trade.

I'm pretty sure Captain America: The Fighting Avenger was actually supposed to be their all ages ongoing for the character.

I'm guessing this is the first two issues crammed together in to a throw away one-shot since Thor: The Mighty Avenger failed.

Nick: I'm pretty sure you are correct.

Never mind that though, this is the month that Kieron Gillen takes over solo writing duties on Uncanny X-Men and Journey into Mystery! I am excited.

42 pages for 5 bucks is a pretty good price for me to get my Cosmic Marvel fix. And Clevenger's last Marvel mini was pretty entertaining, so I'll definitely want to try and remember to check out his Captain America book...

And maybe one day a Cap/Atomic Robo comic could happen...

A: There better dang well be a "Thor Goes Hollywood" cover with Adventures in Babysitting. Also the "Uncle Buck" cover we never got with The Loners.

B: The marketing material for "Fear Itself" gives me the crazy idea they're bringing back Hitler as the Hatemonger.