Awakening Vol. 2 (Archaia) The great strength of Nick Tapalansky and artist Alex Eckman-Lawn’ 2009 story “zombie noir” was, I thought at the time, was the moment at which Tapalansky decided to start telling a story of the overly familiar “zombiepocalypse” scenario, and the pace at which he was telling it: The zombies here are quite gradually “awakening,” and the world doesn’t fall in a day, or weeks or even months.

The Awakened are, at first, oddities and pests, deadly facts of life, but hardly the end of the world. That gives the ensemble casts of characters plenty of time to come to grips with what is starting to happen, and to have their own, personal dramas and character arcs play out. It also allows for a zombie comic or movie unlike most every other zombie comic or movie—and, at last count, there were a lot of fucking zombie comics and movies.

Well, that was one of the book’s great strengths. The other was Eckman-Lawn’s artwork, full of strange, jittery lines over unnaturally shifting character designs that inhabit a poorly lit, photo-collage world. 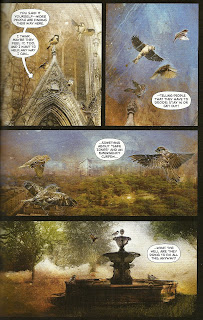 (A page from Awakening; note the photos of birds shopped out and recontextualized into the panels)

This volume concludes the story, and so while we witness police investigations of the Awakening phenomenon and of a string of serial murders conducted by the living, a thorough medical and scientific study of the undead and what makes them tick, the blossoming of a faith movement, the fate of the town crazy lady and the evaluation of some of her ranted claims, we also witness the zombie tipping point.

For all of idiosyncrasies of Tapalansky and Eckman-Lawns approaches, the point of view their story ultimately offers is as bleak and hopeless as most zombie stories, but once the dead start returning to life, the only note on which to end the story is probably predictably down.

The journey there is interesting though, and I particularly enjoyed Tapalansky’s explanations of the what behind the phenomenon and some of the unique details about it.

Hetalia: Axis Powers Vol. 2 (Tokyopop) Quick review of Hidekaz Himaruya’s Hetalia: As weird and tasteless as a manga recasting the Axis Powers as cute boys in a friendship comedy that derives the bulk of its gags from national and ethnic stereotypes may seem from a distance, it’s really political cartooning-as-long form comic stripping, a retelling of world history using appealing symbol-characters.

It’s still kind of weird, of course, and probably not for everyone, but it’s unique and interesting enough to warrant a look from most everyone interested in comics at some point, I should think.

In this volume, the title characters have less to do than in the first. After a color opening in which the trio compile an article on the way Christmas is celebrated around the world for the “World W Academy” newspaper and a sequence in which “Grandpa Rome” visits Germany while Italy sleeps, Italy and Germany are largely absent.

Instead, Himaruya explores Greece and Japan’s relationship (And Turkey’s interference with it), Lichtenstein and Russia’s relationships with their sisters, America and Japan’s attempts to understand one another’s cultures, England and France’s rivalry over which of them will become little America’s big brother in the 17th century, and a couple of pieces about how everyone either ignores Canada or mistakes him for America (Cuba, for example, loves Canada and hates America, but has trouble distinguishing them).

(Since the bulk of you live in one of these two countries, here are brief outlines of how your country-characters appear in the series)

Miss Don’t Touch Me Vol. 2 (NBM) Perhaps the most surprising thing about this volume is its very existence. The 2009 translation and publication of the Hubert-written, Kerascoet-drawn graphic novel was a perfectly-constructed, tightly-plotted mystery thriller set in a Parisian bordello in the 1930s. The title came from the role played by the heroine, who goes undercover there in order to solve the murder of her sister, and is lucky enough to get the job of the official bordello dominatrix/virgin, who no one is allowed to touch.

Because of the complete-ness of that first book, with no dangling plotlines and the mystery solved, it wasn’t exactly a book that seemed to demand—or would even be able to sustain—a sequel, and yet here’s that second volume, collecting two stories originally published in France as Le Prince Charmant and Jusqu’a ce que La Mort Nous Separe.

On the first page, our heroine discovers that because of the way the bordello charges its employees for certain expenses—clothing, food, rent—she’s still in debt and must work it off by continuing to be Miss Don’t Touch Me.

Most of her co-workers are less-than-fond of her—and I suppose if you were a prostitute that had to do it with dudes all day, you’d probably resent the gal who only has to beat them with a riding crop and yell at them while remaining unmolested too—and her life becomes more and more unbearable.

At least until two people enter her life, each promising to make it much, much better in different ways. Her mother comes to Paris, and the pair renew something resembling a shared domestic life as much as possible, and she meets a young, rich, well-respected young man who seems to be her prince charming—even if he does seem interested in her mainly because of how much his dating a high-class, well-renowned prostitute seems to completely infuriate his mother.

Neither relationship works out all that well for anyone involved, and Blanche ends up suffering terribly…to the point that I began idly imagining if there was enough suffering in her story to make her comparable to a Lars von Trier heroine.

As a romantic tragedy tinged with crime elements, this second volume lacks the narrative punch inherent in the murder mystery genre the original belonged to, but it is similarly suspenseful and compelling (When I first read it, I intended to read ten or twenty pages before turning in for the night, and ended up staying up much later than expected, unable to quit reading until I’d finished it).

Despite some of the differences in the type of story, the art is still by the Kerascoet team, and everything I said about their work in the first volume holds true here too—each and every panel is a delight to study, although it’s all so breezy and effortless-looking that one’s eyes are propelled to dance along the panels.

Visually then, this is the exact sort of comic I like the most, the sort that reads super-smoothly, and then can be returned to over and over in order to be flipped through to a random page full of a panels to be studied or adored. 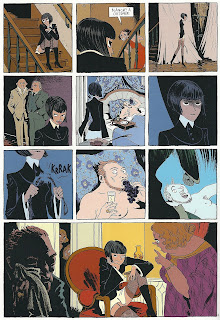