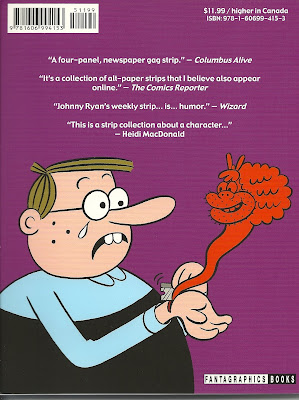 I have a review of the upcoming fourth and final collection of Johnny Ryan's F___ __u, _ss__le at Blog@Newsarama today, and you can click here to read it if you like.

The image above is the back cover of the book, which amused me to no end—I always thought more ads for films should use that sort of clever editing of reviews when assembling blurbs.

Fun fact: The top was is from a review of the first Blecky Yuckarella volume I wrote in...hmmm...sometime between 2001 and 2005. I'd link to that old review, but the paper the review appeared in, the one cited above, was bought out by the city's daily newspaper in '05, and one of the many changes they made to the paper (in addition to getting rid of their most handsome and talented writer/editor) was to delete all of the archives of stories published before the acquisition. Some ten years worth of content, purposefully disposed of. Man, f___ those _ss__les...
Posted by Caleb at 6:22 PM

Note the "Higher in Canada" declaration after the American price!