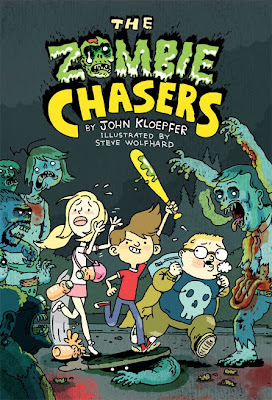 I recently had a conversation with a former co-worker of mine, a children's librarian, and asked her if she'd read any good kids books lately. She recommended a few, I placed holds on 'em at my local library, and when I picked them up I was slightly dismayed to find that they weren't picture books, which I usually think of when I hear the phrase "kids books," but prose fiction chapter books.

I may or may not have discussed this on EDILW before, but I read very, very, very little prose fiction anymore. Part of it is because of the volume of comics I read, which more than fulfills my fantasy and escapism quota, part of it is because as I writer myself I have a hard time turning off the writing parts of my brain and really losing myself in prose fiction and part of it is because I simply prefer non-fiction at this point in my life (I do read a lot of fairy tales and mythology, which I guess is fiction, but libraries put them in the non-fiction sections with Dewey Decimal numbers).

Still, this friend has pretty good taste in just about everything, so I thought I'd give the books a chance. One of them was the book whose cover is pictured above, John Kloepfer's The Zombie Chasers. The other is David Lubar's Nathan Abercrombie, Accidental Zombie Book 1: My Rotten Life: 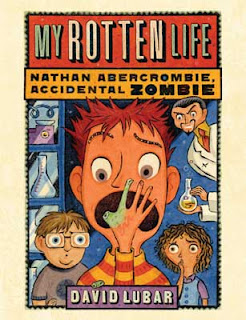 (My friend is fond of zombies, as you could probably tell).

I picked up Zombie Chasers first, in part because of the intriguing title—kids who chase zombies? But zombies are usually the chase-ers, not the chase-ees!—and party because I liked the cover so much.

Those are some great, kid-friendly zombies, with their little, beady, blank-white eyes lumpy, bumpy, green skin and abstracted, cartoony gore. Here's the entire jacket, sans the plot summary and the UPC symbol and price tag, which will give you a better look at the sorts of zombies that populate the outside of the book:

(Click to enlarge, and check out the bearded zombie with a rotten drumstick stuck in its beard, or the zombie with the fishbowl over its head).

As it turned out, it was a pretty good book. It's about Zack Clarke, a middle-school kid who returns home after a hard day to have a hard evening, thanks to his older sister's slumber party and the mean girls she invites to it. And then things get really bad, when a zombiepocalypse scenario occurs in his suburban Arizona neighborhood. Together with one of those girls, Madison, the prettiest girl in the eighth grade, Madison's boggle Twinkles, Zack's best friend Rice, and, eventually, school jock and bully Greg Bansal-Jones must navigate their zombified hometown on a quest to safety.

I'm well out of the target audience for this book, and there were certainly aspects I didn't care for—Kloepfer's writing is clever and funny, but the dialogue he writes for his kid stars is often too clever and humorous in the face of deadly danger, for example (The kids all sort of annoyed me whenever they talked to one another).

On the other hand, it was a really quick and engaging read, which tackled many of the regular zombie literature tropes and still managed to feel fresh. This was my first exposure to zombie lit of any kind aimed at younger kids—back in my day, zombies were strictly the providence of R-rated horror movies—and while there's a lot of implied death and gore in this story, I was sort of surprised at how kid-friendly zombies actually are.

In makes sense in retrospect, but rotting corpses certainly fall lend themselves to the sorts of icky, gross-out things that interest kids, Kloepfer focusing on the grody aspects of zombies, with dripping mucus and slime, bad breath, stinky smells and, in artist Steve Wolfhard's art, lots of flies and bugs circling around the dead.

Also kid-friendly was the fact that this zombiepocalypse may not necessarily be the end of the world; a few characters are brought back from being undead—becoming un-undead, as the characters start to stumble upon a cure. It was also refreshing to see that while Kloepfer including personal takes on familiar scenes and events—a trip to the grocery store, amusing forms of zombies, creative ways of destroying them, a fight in a graveyard—he also works with a few of his own, individual contributions to zombie lore, like a possible "zombie garlic," a popular vitamin/nutritional supplement that is (maybe) to zombies as garlic is to vampires, and hints at a unique source of the zombie plague—a fast food chain with a gimmick sandwich that seems to violate the order of nature (BurgerDog, which serves a hotdog that looks like a hamburger).

The source of the plague, and one of its possible cures, conform quite nicely to my personal dietary beliefs, so I suppose that contributed quite a bit to my enjoyment of the book.

Well that, and the artwork.

Wolfhard draws great zombies, and is a great zombie designer. He's a great character designer too. And BurgerDog mascot designer. He had a really nice, thin line that he applies to abstracted and exaggerated characters—the skinny kids are really skinny, the fat kid is really fat, the athletic guy is really athletic—and his line gets jagged and incredibly busy when it comes to the undead. They often look a bit like the work of a different artist, that's how strong the clash in design is between his live humans and dead ones.

His zombies are also generally pretty funny. I had a hard time finding a good crowd shot to scan that the crease between pages didn't render un-scannable, but his bigger and more detailed drawings reward looking long at, and the 100 or so interior illustrations that he fills the book with are often pretty inspired, and show initiative, illustrating things not discussed in the prose (Zack's ant farm, and the fact that the ants started eating one another when he quit feeding them, is mentioned, for example, but Wolfhard provides a bunch of illustrations of the ants battling one another, in one case with weapons, and a bunch of ant heads end up on spikes at the end of the battle).

As much as I dug Wolfhard's work, it also sort of bugged me as I was reading the book, as both the name Wolfhard sounded familiar (due to it's awesomeness; WOLF + HARD adds up to one badass name) and artwork looked extremely familiar. The bio of him in the back just mentioned that he "ha been drawing comics since he graduated from animation college," without naming any of his work, so it wasn't until after I finished the book and took to the Internet that I was able to find out why exactly Wolfhard's work and name seemed so familiar.

Steve Wolfhard is responsible for the excellent Cat Rackham comic, which I recommended on EDILW last fall after reading every story I could find on Wolfhard's Cat Rackham site (Man, that Cat Rackham Gets Depression comic is sooooooo good...>!)

Let's look at some of his Zombie Chasers art: 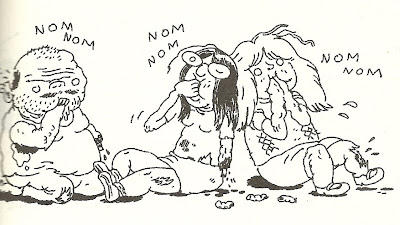 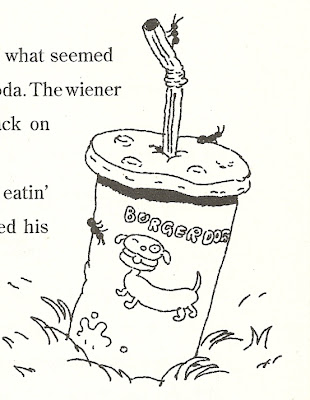 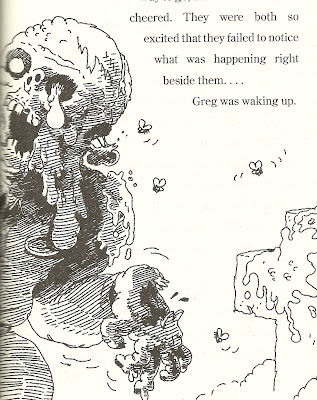 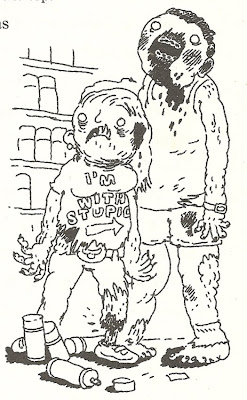 Wolfhard also draws little illustrations at the beginning of each chapter, with some sort of zombie forming the shape of the number of the chapter. Here are a few of the more creative examples: 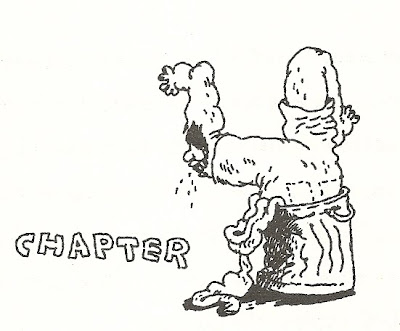 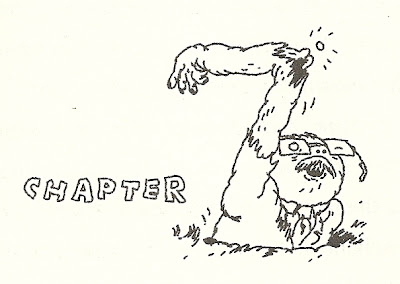 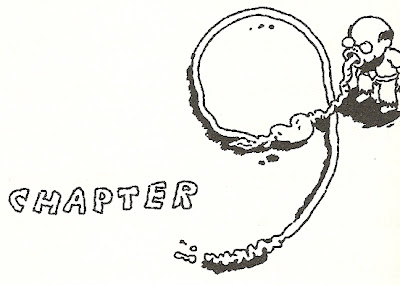 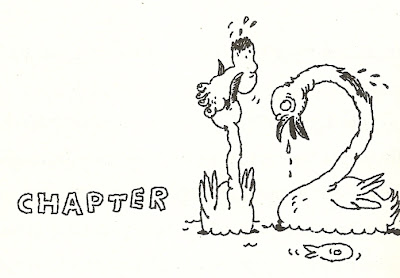 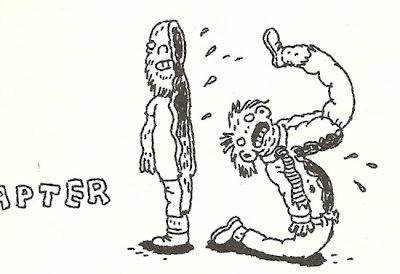 Zombie Chasers is going to be a series of books, with the second volume, Zombie Chasers: Undead Ahead due out in March. If you're a grade-school kid, you should definitely have your parents buy this for you from a locally-owned brick and mortar bookstore, if such a thing still exists near you. And then you should stop reading this blog, because it's full of swears.

If you're a grown-up who likes reading neat kids books, or likes reading about zombies and don't mind reading things written for kids, you might like this.

And if you like looking at really neat drawings of zombies and kids running around, then you should definitely check this out, if only to look at the pictures.

Wolfhard talks a little bit more about his work for the book, and shares some images, on this 2010 post from his blog (And hey, check out his crazy-ass squirrel family tree while you're there). You can also see more of his zombies at thezombiechasers.com.

I should note that at no point during this book do any of the character actually chase zombies, but they are themselves constantly chased by zombies. The title is thus completely inaccurate, and perhaps false advertising. Of course, they do seem to be figuring out a zombie antidote of some sort by the end of the book, so perhaps there will be actual zombie-chasing in future volumes.
Posted by Caleb at 7:24 PM

A Q :
How I see the older posts ?
There is no button or link at hand after your Cry for Justice post.
And the monthly posts link have the same problem.

I have no idea. I've noticed that as well, and wondered how to fix it. If anyone in the reading audience understands blogger.com better than I, do let me know how to fix that.