I'm not going to see Green Lantern on opening weekend—does that make me a bad comic book fan? 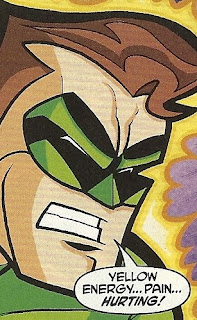 As curious as I am about it, and as much as I want to do my part as a player for Team Comics, I think I'm going to have to wait until Tuesday or Wednesday to see the long-awaited Green Lantern movie. Of the two movie theaters within 25 minutes of my house, one isn't showing it at all, and the other is only showing it in 3D, and the special effects and sickly green lighting of all the previews has made me dread the prospect of trying to see it in 3D. Maybe next week I'll have time to take a longer road trip to a bigger city with a theater boasting the 2D option.

So you'll get no thoughts on the film from me for days yet, I'm afraid. In the mean time, feel free to discuss the hell out of it in the comments, spoilers and all. All the reviews I've seen have been middling to bad; is it better than the nation's film critics would leave a reader to believe?

(The above image, by the way, is from this post of mine, "Hal Jordan, explained in just five panels", and was originally taken from 2010's Batman: The Brave and The Bold #21 by Landry Walker and Eric Jones).
Posted by Caleb at 4:09 PM

No. As long as you see the film, you are fine.

The Green lighting is much more subdued in the film, it is not difficult at all to watch, and is frankly the first 3-D film I thought was actually worth seeing in 3-D.

Don't feel bad -- I've been meaning to see Thor but haven't been able to get to it yet. :-( I am DETERMINED to see Captain America on opening night, tho!

The reviews so far for the GL movie have been terrible. I think I'll be waiting for cable for this one...

I only see superhero films in first run if they don't look terrible or if my wife really wants to see them. Sadly, Green Lantern doesn't meet either of those criteria.

On the bright side, it almost has to be better than I think it is going in.

From what I've heard, you might be an even better (and happier) fan if you don't see it at all!

I saw it in 2D and thought the special effects looked great compared to Thor's SFX. I enjoyed the movie about as much as Thor. The storytelling in both is weak so it's really just about the "fun" to be had. I really liked X-Men First Class much more than I expected and would recommend it over the others. I'm not even an X-Men fan.

I saw it (twice) in 2-D and it was gorgeous. And fun. So pooh on the critics.

But how was Ryan Reynolds' butt in the role of Hal Jordan's butt, Sally?

3D was great. See it in 3D.
the film is amazing and great fun by the way.

What does it say about me as a comic book fan that I actively want to avoid seeing this movie? It looks awful; it's getting poor reviews (from friends and critics); and I have no interest in the characters or actors involved.

I think I saw Thor its third weekend, and X-Men its second, and X-Men only because a friend asked me to go with him.

Also, I saw Iron Man 2 only because my wife wanted to see it, and still haven't seen either Hulk movie, Wolverine, Ghost Rider, Daredevil, Elektra, either FF, Constantine and probably several other notable superhero films. I finally borrowed Hellboy 2 from Netflix a couple months ago, though!

My friend, a non-comics reader (to the tune of "I don't know who Green Lantern is") went to see it & she came out of the theater saying "I want a Green Lantern ring!" so as far as I'm concerned that is mission accomplished.