Trades I Waited For (Part 1): Superboy: The Boy of Steel 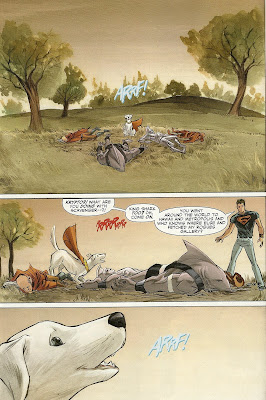 Here’s a pretty good example of what, precisely, is so scary about DC Comics’ plan to relaunch their entire line of comics later this year, a plan that involves an ambitious digital strategy, an increase in production of titles, redesigns of all of their characters and a reboot of their fictional history.

As a whole, the publisher hasn’t been very good at planning very far ahead (Grant Morrison’s Batman comics and Geoff Johns’ five-year Green Lantern run aside), and over the past half decade or so has shown an increasing tendency to change its collective mind quickly, and often change direction suddenly.

The comics collected in the trade Superboy: The Boy of Steel were originally produced and published in 2009 and 2010, which might conceivably seem like a long time ago to someone who deals with superhero comics as monthly serials (and I think that’s fine for DC to focus on that side of their business over trade readers, honestly), the trade was just published in May of this year. A month and a few days ago.

Since the first of these Superboy comics from Adventure Comics was published, the $3.99/32 page title changed it’s numbering and focus, losing the Superboy feature and Legion of Super-Heroes back-up to become a secondary Legion book, a back up-less $2.99/22 page book.

Since the first of these Superboy comics was published, DC launched a new Superboy title with the same premise (Superman’s resurrected teenage clone moves in with his namesake’s recently widowed mother and super dog in Smallville in order to learn the lessons the original Superman did), but an entirely new creative team of Jeff Lemire and Pier Gallo. And they announced that same new title’s cancellation (with August’s #11) and a new Superboy title with another new creative team and a (seemingly) radical new direction.

And, finally, since the first of these Superboy comics was published, their creative team Geoff Johns and Francis Manapul moved on to an entirely different title—another volume of The Flash—which has, of course, also been canceled and set to relaunch with a slightly different creative team (Johns is leaving, Manapul is staying and getting anew partner).

When I originally finished reading this collection a few weeks ago and was thinking of whether it was something to blog about or not, I was planning on at least asking readers for advice on what to read next. See, I really enjoyed this and knew DC had continued to publish more stories about these characters by different combinations of creators, but I wasn’t sure what came next (There was some Blackest Night stuff in Adventure Comics which I assume got trade-collected somewhere, and then the Lemire Superboy).

Now reading more seems like a somewhat quixotic venture. There isn’t really any more just like this, and what little there is similar to this has been scrapped by its publishers as something not worth pursuing, comics brush that needs cleared in order to plant something new and better.

That’s a shame. I really rather liked this book.

It gets off to a perhaps needlessly rocky start. There’s a one-page prose summary of Superboy’s biography—his debut, the discovery of his retconned origins, his death and his resurrection—followed by the “Origins & Omens” back-up from 2009’s Adventure Comics #0. Do you remember those? I had honestly forgotten them until I saw this one.

They were short six-page stories that ran in the back of all of DC’s super-comics just before the launch of Blackest Night. They were all essentially the same story. Evil, scarred Guardian of the Universe Scar looks in The Book of The Black, a giant black book in a framing sequence, and then the focus shifts to a recounting of an origin story, with some ominous hints about the near future sprinkled in. Here it’s Lex Luthor’s origin and then-current status quo—captured by Lois Lane’s dad in order to build Kryptonian genocide machines for a war with New Krypton—with the hint being the imminent return to life of the then-dead Superboy.

I can understand why they stuck it in here, for completeness’ sake, but it seems needlessly confusing, as it only serves to bring up something from the Green Lantern books and Superman books that have nothing to do with the contents of the trade. Like, if someone wanted to know a good Superboy comic and asked me for a recommendation, I’d probably pick this—but I could see them giving up after six pages. (Including everything, even the unimportant stuff, by the way, seems to cater to the trade audience instead of the monthly audience, which, as I stated before, is often DC’s focus; it doesn’t hurt to create content exclusively for your monthlies to help incentivize readers buying it…even if that content is, like these six pages, kinda lame).

Not that I have much room to talk about a reader un-friendly beginnings. I did just spend the first 800 words or so on what was intended to be a review of Superboy: The Boy of Steel on a tangent of sorts.

Anyway, after the clunky first few pages, Boy of Steel is smooth sailing all the way through: It’s pretty great super-comics, and despite the fact that they were culled from parts of Adventure Comics and at least one Superman special, despite the references to past Teen Titans stories and at least one scene that goes nowhere (I know it actually goes to the Legion back-up, but since those aren’t part of this collection, it seems to go nowhere) it actually holds together and forms a structurally sound, completely pleasingly complete story with a beginning, middle and end.

The story he’s telling is remarkably accessible, with a sturdy enough, hooky structure to hand a graphic novel on. Superboy, cloned from DNA taken from the worlds’ greatest superhero and the world’s greatest villain (Lex Luthor, if you don’t follow these things as closely as most of us here), is worried he might end up taking after his bad dad instead of his good one. So he keeps a little journal checklist, to compare his behavior to, checking off all of the Superman things he does (“Went to Smallville High,” “Joined a team of super-heroes) and all of the Luthor things he does (“Lied to Superman.”)

While working his way through the list, Superboy acclimates himself to his new life and picks up a new supporting cast (with a particularly prominent role given to Krypto The Super-Dog) while reuniting with his closest friends, in big scenes that were intended to serve as fan service (in the Western comics sense). So Superboy and his best friend Robin-turned-Red Robin share a moment, and Superboy and his ex-girlfriend Wonder Girl share a few moments and, at the climax, he gathers together with his little super-clique. Along the way, he crosses paths with both of his genetic fathers, and Johns gives Luthor a particularly nice—if nasty—character defining scene in the issue with perhaps the most fun cover.

I’m curious about how effective Johns’ scripting might have been were he not working with Manapul and colorist collaborator Brian Buccellato.

Manapul is quite skilled at evoking the youth of the main character and the many teens in the series, which has long been one of the greatest and most obvious deficiencies among many of the artists who have drawn these Teen Titans, as they usually look, dress and “act” like adults.

Because of Manapul’s smooth but effectively expressive art, and Buccellato’s colors, the entire book has an extremely painterly feel to it, and most of the scenes—particularly the many in Smallville—seem to be occurring either at night, dawn or dusk. This is a very moody comic, unusually moody for a mainstream superhero comic, actually, but the mood isn’t a dark or brooding one, it’s nostalgic, elegiac.

I can’t say enough good things about Manapul’s work as seen in this book, and particularly his Krypto. I’ve always been a fan of the super-dog, so perhaps I was a particularly easy sell, but Manapul’s Krypto is maybe the best one I’ve seen this side of Crisis On Infinite Earths, and I love the way he depicts the dog’s emotions and that Geoff Johns (who often seems like the avatar of superhero decadence), gave him such a sweet, important and realistic role in the book.

DC makes a lot of strange decisions, and changes their minds about those decisions frequently and without warning, but this, at least, is one comic strip they got quite right.

Let’s look at some art, okay?

Here’s about half half of a double-page spread, from the first full story in the book: 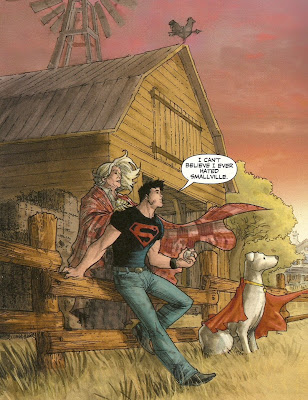 The other half is a cornfield stretching diagonally back into the horizon. That’s really a hell of a splash page, and a rare one in which the space isn’t wasted and actually serves the story.

Manapul’s Krypto often reminded me of Jill Thompson’s Beast of Burden work, particularly in the scene where Superboy investigates Luthor’s old Smallville home and he and Krypto find Superman.

This was my first favorite panel featuring Krypto, though: 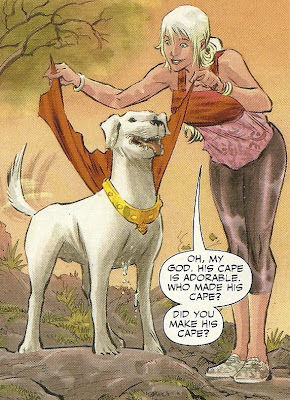 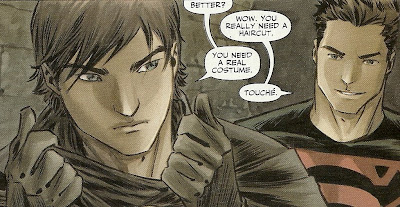 There’s a scene where Superboy asks Tim to take off his Red Robin cowl, and it was pretty amazing how vastly his visual appearance seemed to improve without the cowl on (Although, as noted before, Manapul drew him like an actual teenager, so Manapul’s Red Robin looked superior to a lot of other artists’ version of the character).

I think if they would have ditched the cowl for a little red or black domino mask and maybe tweaked the Hawkman-like harness, Tim might actually look cool as Red Robin. Instead they went with this.
Posted by Caleb at 8:19 AM

Krypto looks cute in that splash page.
I would totally/probably buy this if I already woudn`t have other stuff to buy.

If I were to write a review, I think I'd just put a link to yours with a "What he said" by it.

Honestly, I wasn't too interested in this when it came out. My library got it in, so I thought it might be interesting. I used to be a huge fan of Johns' work, but over the last few years, I've liked it less and less. This trade is a great example of what I used to like about it. Wish he'd do more like it and less like the Flash Rebirth mess I finished reading just before reading this one.