I'm still having trouble comprehending the fact that they actually went ahead and made a Green Lantern movie—and before a Wonder Woman, Flash or Aquaman movie!—so the cognitive dissonance I experienced when I saw this crazy display in my local grocery store: 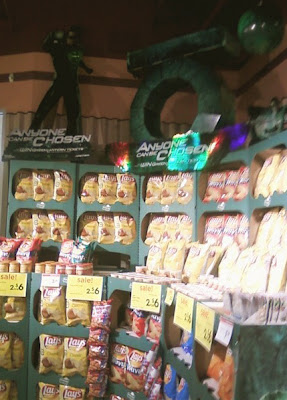 I couldn't quite fit it all in, but there were no less than three cardboard cut-outs of Ryan Reynolds as Green Lantern Hal Jordan positioned around it.

These are life-size, if Ryan Reynolds were half-hobbit, and depict Green Lantern with his fist extended, as if to offer a passerby a terrorist fist jab. They look like this: In the fist, where his ring is, there's a tiny little green light bulb, which blinks hypnotically (I think it spells "B-U-Y-D-O-R-I-T-O-S" in morse code).

The little green plastic sphere in the upper part of the first image? That's a little inflatable moon that says "Brisk," as in Brisk-brand ice tea, which is orbiting a bigger inflatable sphere that looks like the planet Jupiter. It reads "Doritos." The "Anyone Can Be Chosen" written here and there on it refers to the Doritos/Green Lantern promotion contest thing, in which I guess you eat a bag of chips and get a code and enter it into a website and win something.

It doesn't really sound quite Green Lantern-y enough. I mean, anyone can be chosen? Shouldn't the winner have to be completely without fear, or have the ability to overcome great fear? This is a Hal Jordan movie, after all, not a Kyle Rayner movie.

Anyway, how strange are these strange times we live in? They are so strange that Hollywood has spent millions and millions of dollars making a Green Lantern feature film , and now when you go to the grocery store, you may see Green Lantern there, attempting to sell you chips and ice tea. 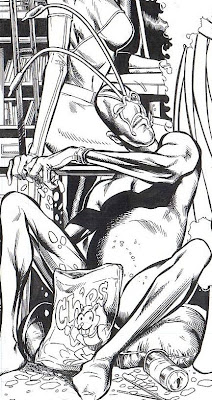 Sadly, Doritos opted not to go with the above Green Lantern/snack chip branding, in which pencil artist Phil Jimenez attached the name and likeness of Ch'p, the squirrel-like alien Green Lantern to a brand of chips in 52 #24, as seen in the detail from an uncolored image from the issue above.

Maybe they'll release Doritos Ch'ps to tie-in to the sequel...
Posted by Caleb at 7:16 PM

Hey, Green Lanterns may be without fear, but that doesn't mean that they are without taste! And that means the crispy treats as offered by Doritos!

Yeah, Green Lantern pitching avocado for Subway was the one that caught me off guard.

In the UK, the Green Lantern pops up on ATM machines in Tesco supermarkets, offering the chance to win a trip to LA whenever I take cash out the machine.

That's a strange sight indeed. I wonder why they didnt see an opportunity with the green Becks beer bottles. Thinking of tricking mine out with GL just for fun. I love you're writing by the way. Clever, clever.