So I probably shouldn't bother with the trade at this point, huh? 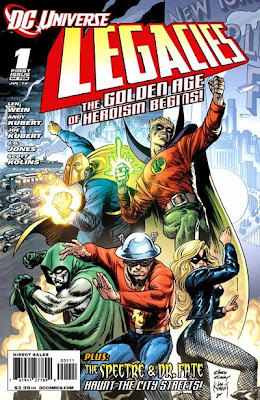 In May of last year, DC finally shipped the first issue of DC Universe Legacies, a long-promised ten-issue series retelling the history of the superheroes of the DC Universe, from their late-thirties beginning, through World War II and all the way up until the present day.

It was written by Len Wein, and while it would presumably tell a unified story of some sort, it would essentially be retelling parts of pieces of scores of series DC Comics published throughout their history, there were still two really strong selling points to the series.

Secondly, it was pitched as the definitive account of the history of the DC Universe after the 2006-2008 era stories fiddling around with the consistency and continuity of that university, and the death, rebirth and remixing of various alternate universes (This would include the changes brought about by Superboy Prime's battering the walls of fiction to escape his "heaven dimension," the creation of "New Earth" in Infinite Crisis, the revelation of and recreation of the 52 parallel Earths in 52, the changes wrought by Darkseid's deicide of Orion in Final Crisis and the subsequent de- and re-creation of existence).

While both points made it a series I was really looking forward to reading—especially the prospect of Joe Kubert drawing Golden Age heroes!—Legacies was being released just as I was moving to a comic shop-free city, and deciding that I'd start buying new series I was interested in only in trade collections moving forward.

The tenth and final issue of Legacies shipped this past March...a mere three months before DC announced that they would be rebooting their entire universe and thus its history/continuity yet again. The hardcover collection ships in August of this year; one month before it's likely made at least somewhat irrelevant by DC's September relaunch.

Obviously the first selling point (all that art by all those great artists) won't disappear from the collection or anything, but the second one sure seems awfully irrelevant now. This particular project is also one more piece of evidence that this September relaunch, as big and ambitious as it is, couldn't really have been in the works all that long. After all, why bother making and publishing this comic if you knew you were going to change the history it covered anyway in about a year? Why not wait until October 2011 to start publishing it, so it could reflect the new state of that history?
Posted by Caleb at 7:54 PM

I just hope this is the LAST reboot. Seriously, DC has went through about four soft reboots in the last decade. It's getting ridiculous. I hope the changes they make here actually stick and can open up their new universe properly.

But I am not holding my breath.

The artwork in Legacies is as spectacular as that lineup of artist would lead you to believe. The story, however, is a bit of a mess. I don't fault Len Wein for that, as his writing isn't bad in itself, it's just that I feel he was given kind of a raw deal. Every major key DC event since Crisis is (er...was...) still in play, but some were re-arranged and others re-imagined and no actual context or details were given. The series basically read like a "Best Of DC" digest with the stories re-drawn.

I don't understand. For years I've been saying "Comic book writers, we don't CARE about continuity! We GET it, they are mythological characters, you can tell an All-Star Superman story without me being like 'guys, guys, is this CANON?' because I UNDERSTAND that these ideas are more powerful than whatever the last twenty published issues say." But now that DC seems to be listening-- we're supposed to be mad? I don't care about continuity! Uncouple the stories from a notion of continuous canon! Are the Legacies issues good (yes!)? Then read them for their own sake.

Not to be catty, but Al Milgrom does not belong on any list of "legendary" artists.

It is funny DC makes the "DEFINITIVE" book about their continuity, then goes and shuffles a bunch of it up.

LC Douglass said...
This comment has been removed by the author.
8:46 PM

I bought it, save your money. I like Wein and of course all the artists were a draw (pun intended I guess). But ugh. The story reflects the plasticky-Dan Didio era of thinking about the DCU - that hangs over everything. So you get all the grandeur of the DCU, without the grandeur. The story was hashed up too, told from an every day citizen's POV. Problem is, that story wasn't that engaging, and secondly the narrator knew things no man on the street could know. Then, like I say, add the Didio treatment on top. Skip it.

As others have said, the writing is a bit all over the place. The first half of the series follows the "Marvels" formula - it's a story about this one dude who lives in the DC universe and occasionally interacts with superheroes. Then, the second half is just a series of detailed summaries of major event stories, beginning with Legends, and continuing with Death of Superman, Knightfall, Emerald Twilight, Final Night, and Day of Judgement. It's a weird selection, to say the least, since Knightfall and Legends have no relevance to the current DCU, and the last three (the death of Hal Jordan trilogy) were all undone by Green Lantern Rebirth (which isn't mentioned). Throughout, the series is full of weird resequencings of events which all feel like editorial mistakes rather than retcons. (It is suggested, in a throwaway line, that John Stewart debuted as Green Lantern the same week Superman died, for example. There seems to be no rationale for this change, other than, maybe, Wein or the editor wanted to include a mention of Stewart, but forgot to do so at the proper time, so they shoehorned it in later.)
It is also bizarre that the story's narrator has intimate knowledge of Emerald Twilight, an event for which there were no surviving witnesses.
All in all, it's well worth checking out for the art, but do not expect a coherent History of the DCU, pre- or post- September.

I picked up a couple issues of Legacies cheap: the back-ups are pretty good (Brian Bolland! Frank Quitely!) and the main story was meh.

They could bill this as the last good-bye of the old DC Universe, *if* DC would make a statement on it. But they're so closed-mouthed on these things that the book just sits out there, and no one knows what it's *for.*

You have a good point when you speculate the whole relaunch fiasco couldn't have been in the works for as long as DC claims it has been. Take Xombi, for instance. Why launch any new title knowing you were only going to cancel it after six months?