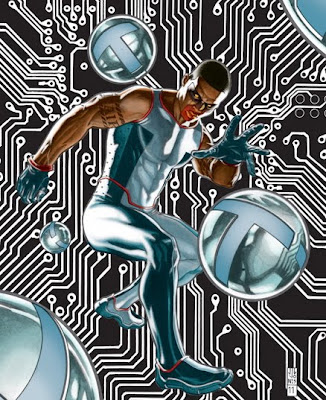 DC released the titles and creators of 10 of their announced 52 new titles, as part of their bombshell "Has DC gone totally insane, or just a little crazy?" announcement the other day. (They already announced a new Justice League of America, and that TEC and Action would be renumbered, and it's safe to assume Superman and Batman will have at least one comic apiece, so that's 15 out of the 52 announced).

You can read about them here on Newsarama.

What's striking? All of the names are familiar.

Writers include Geoff Johns, Tony Daniel, Gail Simone, J. T. Krul, Dan Jurgen, Eric Wallace and Paul Jenkins. Jenkins, who has written primarily for Marvel, and artists Francis Manapul and Ethan Van Sciver co-writing books seem to be the biggest injection of new writing blood within this suite of ten titles. Of them, Johns is the only superstar writer; all of these folks have books that sell somewhere between poorly and mediocrely on the charts right now.

The artists are all folks who have been doing a lot of work for DC already as well: Freddie Williams II, Bernard Chang, Cliff Chiang, Ivan Reis, Yildiray Cinar, Dan Jurgens, Philip Tan, Aaron Lopresti, Roger Robinson. I like most of those folks, and I like Chiang's enough to buy whatever he's drawing, but, again, no rearl superstar, sell-the-books-by themselves names.

Beyond the problem that these are the same folks already making DC Comics, which begs a question of why DC expects this to work better than what they're already doing, I already see at least one problem creative team—even with a co-writer and co-artist, I'm skeptical of Manapul's ability to keep a monthly schedule (and curious as to whether he sells a book, as a new writer).

As for the characters, several of these books were previously announced, including Aquaman and Justice League International. Several are renumbered versions of books that have been chugging along for a while with relatively poor sales, including Wonder Woman and Green Arrow. Several other characters have had trouble keeping a monthly going for long, including Hawkman and Firestorm. I'm having trouble imagining a Captain Atom or Mister Terrific catching on in the current climate; the former has had a solo title before, but it's been a looooong time, and the latter's never headlined more than a one-shot, and seems doomed if it's simply one of 52 new books from a single publisher (And Mister Terrific also has one of the most lackluster of the creative teams here...although, again, I like the artist).

The costume designs look either untouched or only slightly tweaked, save for that of Wonder Woman (which we already knew would be getting a new-new bad costume, of which I'd like to post about a bit later), Booster Gold (ugh; I wish they woulda had J.H. Williams III or Darwyn Cooke or even Alex Ross, whose redesigns fans and DC execs obviously love, re-costume their universe), Green Arrow (who looks like he's wearing Ultimate Hawkeye's get-up, which was already used as inspiration for an old Arsenal costume) and poor Mister Terrific, who apparently ditched jacket with the words "Fair Play" on the sleeves to have "Fair Play" tattooed onto his biceps.

Like giving Wonder Woman pants or taking away Superman's red shorts, that seems like one of those boneheaded moves where the folks responsible focusing on something silly about an inherently silly character and decide to fix it, which generally only makes the problem worse as it calls attention to it and makes the publisher seem out of touch. If mainstream America is less-inclined to buy DC Comic book serially than direct market consumers, the reason is probably a lot bigger than the way in which Mister Terrific advertises his belief in Fair Play or how much of Wonder Woman's legs are left bare.

All that grumbling said, I see three titles here I plan on reading—Wonder Woman, Aquaman and at least the first issue of JLI—and I only see one that's definitely a loser (Mister Terriffic), although there's quite a few in there that look like they're going to have an uphill climb if they're going to see issue #12 or #20.


UPDATE: DC has now announced the four—four!—Green Lantern-related books, as you can see here. Some of the title have changed slightly, and it looks like some status quos have as well, but the creative teams are all the exact same. The previously announced Red Lantern book by Peter Milligan features Ed Benes art; Benes has done some fill-in work for GL in recent months.
Posted by Caleb at 4:29 PM

Five'll getcha ten that Mr. Terrific is a mini-series, which I'll probably check out. Aquaman looks great. The rest? Hello wayside. I'm bouncing betwixt very mildly offended, disappointed and just plain bored. I guess there was a lot of middling crap post-Crisis, but a Giffen & DeMatteis, Alan Moore or Frank Miller that stands out.

Anyway, with any luck this line-wide reboot puts a bullet in the skull of the Teen Titans volume Geoff Johns started, AKA "The inky swirling black hole of talent."

I laughed, because Mr. Terrific is the book I'm most likely to get of these 10, though Firestorm will probably have a shot as well.

And the trend of DC hiring everyone except for new writers (i.e. ex-editors, artists) to writer their books continues.

On the plus side, I'm quite curious about the Mister Terrific book, and they did surprise me with the creative team on Wonder Woman.

Oh, and if you'd like to try your hand at guessing what the other 41 titles are going to be, I've started a pool of sorts here: The great 21st century DC Comics reboot 52 title Guess-a-palooza

Most of the DC readers I've talked to at the LCS I work at are looking at this like a jumping-off point, at least so far. Only one person I've talked to is excited.

I'm thinking (hoping?) that they just threw those 10 in there in one big press release because they weren't particularly exciting, and that releases to come will have more pizzaz. For example, where's Paul Cornell in this? Roberson? Lemire? Morrison? Snyder? Winick? Tomasi? (Not to be read as support for each of those people, but they've been dependable or sellers in the past.)

Maybe/Probably their books deserve a press release of their own. Simone's got another project too, according to her twitter.

Willworld was such a beautiful comic...I wish I could find my hard cover copy.

And OF COURSE they would announce 4 GL books! Why would they announce any less? And isn't there like a dozen Bat-books taking slots for much better titles amongst there 52 books?

" DC has now announced the four—four!—Green Lantern-related books, as you can see here."

Thanks for the link! But I think that might be the wrong link to match that sentence. My 52 comics are all inside my little stuffed brain!