It's easy to forget, given how much attention has been spent on DC's plans for September by me and, um, seemingly everyone else who pays attention to Big Two super-comics, but Marvel is still in the comics-publishing business as well. What are they up to this September? Well, nothing as radical/ambitious/totally insane as DC's plans.

You can see their full solicitations here, and read my thoughts below. 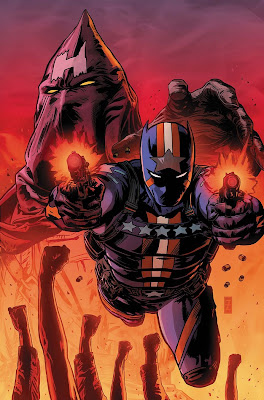 BLACK PANTHER: THE MAN WITHOUT FEAR #523
Written by DAVID LISS
Penciled by FRANCESCO FRANCAVILLA
Cover by PATRICK ZIRCHER
FEAR ITSELF TIE-IN!
With Manhattan—and the world—overrun by chaos, a brutal battle for the soul of the city is waged by the reborn Hate-Monger and the American Panther!
32 PGS./Rated T+ ...$2.99

Have Hawkeye and the Hate-Monger ever met? Was it awkward, since they both wear purple cowls with large H’s over their foreheads? 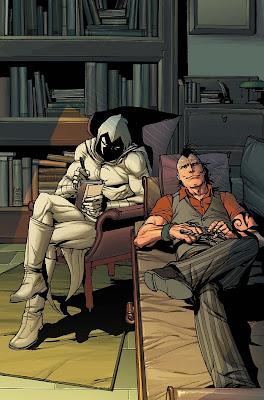 
FEAR ITSELF #6 (of 7)
Written by MATT FRACTION
Penciled by STUART IMMONEN
Cover by STEVE McNIVEN
Variant Cover by STUART IMMONEN
Variant Cover by MIKE McKONE
Marvel Architects Variant also available
Marvel Architects Sketch Variant also available
The penultimate chapter of the apocalypse is here! Captain America, Thor, and Iron Man scramble to make Earth's last stand against the relentless Serpent and his army of world-shattering avatars--all while amongst unbelievable chaos and destruction, Spider-Man makes the choice of a lifetime! Dark Asgard has risen and all of Earth's forces converge on the World Tree as the globe shudders in the shadow of FEAR ITSELF!
32 PGS./Rated T+ ...$3.99

Oh really? Spider-Man makes the choice of a lifetime? Whose lifetime? His? Because it's kind of hard to imagine him having to make a bigger choice than that one time he had to decide whether to sell his marriage and a chunk of personal history and memory to the devil in order to save his elderly aunt’s life...


FEAR ITSELF: THE DEEP #4 (of 4)
Written by CULLEN BUNN
Pencils & Cover by LEE GARBETT
FEAR ITSELF TIE-IN
Namor, Doctor Strange, She-Hulk & The Silver Surfer giant have battled barbarian hordes, giant monsters, and demonically-_possessed sea creatures. They’ve faced Tyrak the Terrible, Aradnea the Sorceress, and the hideously-mutated Tiger Shark. But their greatest threat still awaits—the Worthy who has already beaten the Sub-Mariner and single-handedly ravaged New Atlantis. Would-be conqueror Attuma has become_Nerkkod, Breaker of Oceans, and he intends to drown the_entire world in a wave of fear! Even if Namor’s courage and resolve return to him, he’s no match for the fury of the_Serpent’s chosen!
32 PGS./Rated T+ ...$2.99

Nerkkod is a funny name. 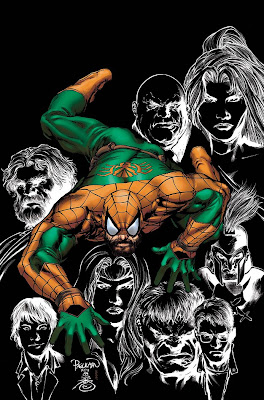 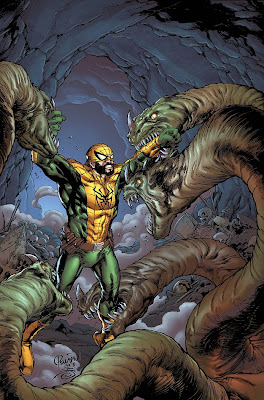 I never would have thought that a big, beefy, bearded Spider-Man would have been the coolest looking thing ever, but then I saw these covers to Herc tying into that weird Spider Island event/crossover thing Marvel's doing this summer and fall. 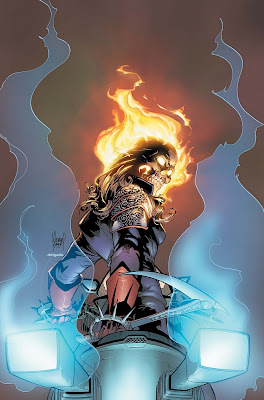 Okay, it’s been a whole month, and I still can’t get used to the idea of a skeleton with breasts. Sorry.


JOHN CARTER: A PRINCESS OF MARS #1 (of 5)
Based on the Novel by Edgar Rice Burroughs
Adaptation by Roger Langridge
Art by Filipe Andrade
Cover by Skottie Young
Variant Cover by Filipe Andrade
Captain John Carter finds himself on a strange new world where he must fight for his very life - and for the heart of a princess! Edgar Rice Burroughs' legendary novels come to life in this actionpacked, all-new re-envisioned adventure! Meet the Tharks, terrible warrior race of Mars! See Woola, the scariest guard dog you'll ever lay eyes upon! Gasp as John Carter battles the great white apes of Barsoom! And hold your breath as he first lays eyes_upon the woman who will change his life forever - the proud_and beautiful Dejah Thoris, Princess of Helium!
32 PGS./All Ages ...$2.99

Well "John Carter" is a weird name for a princess, no matter what planet she's from... 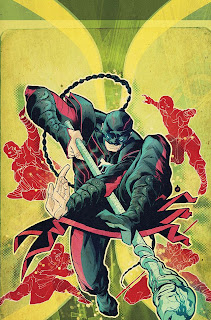 FEAR ITSELF: THE MONKEY KING #1
Written by JOSHUA HALE FIALKOV
Art & Cover by JUAN DOE
FEAR ITSELF TIE-IN
Meet Marvel’s newest star! Spinning out of IRON MAN 2.0 and FEAR ITSELF! Discover the history of Sun Wukong – Thief! Trickster! Hero! Great Sage, Equal of Heaven! – and witness as he takes his place at the forefront of Marvel’s ranks, the legendary Handsome Monkey King
32 PGS./One-Shot/Rated T+ ...$2.99

I’m intrigued of the idea of a Marvel character inspired by the mythological Chinese hero, but it’s Juan Doe’s presence that seals the deal—I’ll buy anything that cat draws. September looks like a good month for writer Fialkov; his I, Vampire debuts from DC as well. 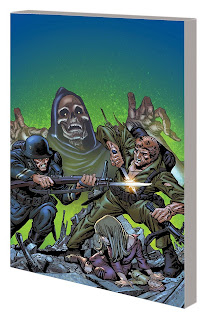 NEW AVENGERS #16.1
Written by Brian Michael Bendis
Pencils & Cover by NEAL ADAMS
An Avengers chapter so special, Marvel had to go to legendary Avengers artist Neal Adams to bring the fire! It’s THE RETURN OF NORMAN OSBORN! H.A.M.M.E.R. is becoming a force to be reckoned with and the followers of Osborn are ready. The New Avengers/H.A.M.M.E.R. showdown is one for the record books and is the first chapter in the blistering new storyline that will herald the return of the Dark Avengers!
32 PGS./Rated T+ ...$2.99

Can Iron Fist fly now? And what’s up with Gobby’s hat? 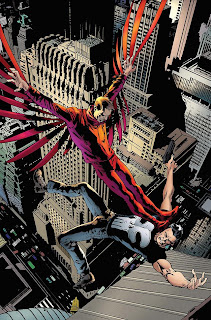 THE PUNISHER #3
Written by GREG RUCKA
Penciled by MARCO CHECCHETTO
Cover by BRYAN HITCH
Award winning novelist GREG RUCKA continues his violent and visionary return to Marvel.
Even 10,000 feet above New York, no one escapes the_Punisher. As Frank trails the criminal underbelly of the city, he encounters the deadly, mob created villain: THE VULTURE for a brutal battle against death and gravity. Meanwhile as NYPD detectives get closer to understanding Frank Castle’s new relationship, one of New York’s finest is struggling keep his own_Punisher association untraceable.
32 PGS./Parental Advisory ...$2.99

I don't care for that Vulture's costume or design. And I'm pretty sure it doesn't look like something that should be able to fly. Maybe it's just decorative, and he flies through some other means. 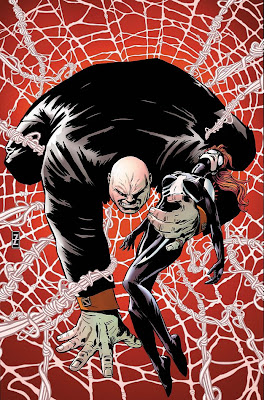 SPIDER-ISLAND: THE AMAZING SPIDER-GIRL #2 (of 3)
Written by Paul Tobin
Penciled by Pepe Larraz
Cover by Patrick Zircher
SPIDER-ISLAND TIE-IN
As the Society of the Wasps mobilizes an army to put a permanent end to ALL spiders, Spider-Girl to fight side-by-side with the Kingpin! But if Spider-Girl is Kingpin’s enforcer, where does that leave the Hobgoblin, and will he prove the deadliest threat of all? Paul Tobin (SPIDER-GIRL) and Pepe Larraz (WEB OF SPIDER-MAN) bring the battle of the bugs!
32 PGS./Rated T+ ...$2.99

Spoke too soon. Better than a beefy, bearded Spider-Man? A gigantic fat Spider-Man with the head of an angry baby wearing a suit. These covers are really making me interested in this Spider Island business...I have no idea how I'll go about reading it in trade though, as I imagine the main story arc will be collected in one place, and then each mini and/or story arc from an existing title (like Herc) will get its own trade...? 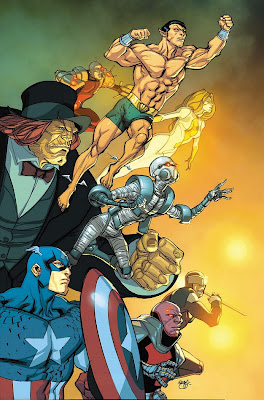 I like Mr. Hyde’s new costume. I assume that’s Mr. Hyde on the cover of that Thunderbolts cover. I’m gonna get caught up on that series in trade one of these days, I swear. 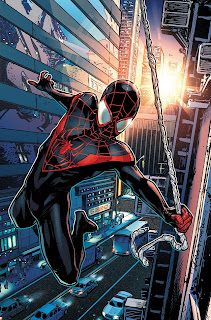 So all Marvel’s willing to reveal about the first issue of Ultimate Comics Spider-Man Vol. 2 is its creative team and that it will be polybagged?

Uh, that’s not really much of a pitch, I’m afraid.


ULTIMATE COMICS X-MEN #1
Written by Nick Spencer
Penciled by Paco Medina
Cover by KAARE ANDREWS (POLYBAGGED)
Variant Cover by Paco Medina
The biggest mutant cover-up has gone public as the true history of_the x-gene is revealed. As an identity crisis rocks the mutant world,_the mistrust between man and x-man gets deeper. But a bigger_question remains: who are the X-Men? Nick Spencer and Paco_Medina make their thunderous Ultimate debut in one of the most_anticipated series yet!
32 PGS./Rated T+ ...$3.99

Oh come now; that last sentence is a damn lie.

I can't say that I'm particularly excited, but the cover with the Thing and X-whatever is actually rather nice.

As opposed to the Thunderbolt's cover. That has to be the worst looking Namor that I have ever seen.

>(Issue #1 Cover will be POLYBAGGED)

So the cover will be sold separately from the contents?

American panther cover is cool. So is the fact tha this is the first time that Hatemonger battles T`challa.

Goblins hat has dissapperead to the smoke.