Columbus-based comics writer Dara Naraghi offers an essay on where exactly Wizard World can go, after having gobbled up Mid-Ohio Con (Which, when I was still based in Columbus, was long one of the biggest holiday weekends of the year for me). Among the MOC image Naraghi shares in illustrating the piece is the above John Romita Jr. sketch of Typhoid Mary. 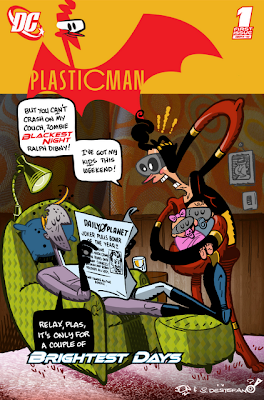 You've no doubt already heard of the "DC Fifty-Too" blog, which features 52 "pitches" for new DC series by artists who aren't working on any of the New 52. It's a blast. (And I had trouble picking a cover to throw up there, as all three of my favorite Golden Age DC supehreroes that DC seems to have such a hard time getting right have entries; I went with DeStephano's Plas, but here's Doc Shaner's Captain Marvel and Nathan Fox's Wondy ).

There are a lot of relatively obscure characters and concepts that seem well worth a revisit if the publisher is serious about reaching a new mainstream audience (one that would almost by definition have to include kids, women and people who like comics that don't usually have superheroes in them), ones like Impulse, Amethyst, Angel and The Ape, Kid Eternity and Klarion the Witch Boy, and a whole mess of talented creators who seem perfect for reaching that new audience, like Jim Rugg, Corey S. Lewis, Jemma Selume and Amy Mebberson (And Katie Cook's Dex-Starr has to get at least a one-page back-up strip in the many Lantern comics).

Mike Sterling notes a common theme among DC's November covers in his latest"End of Civilization" post. (There's a hint in the image above, and image that grossed out Johanna Draper Carlson).

Don MacPherson takes a closer look at a crazy Marvel scheme to trade a free ad with retailers who promise to buy enough of their books. I don't really understand why this would be all that attractive to retailers, since so many comic shops serve particular cities or regions, and thus aren't really served too terribly well by national advertising (Although I guess a lot of 'em do ship comics and suchlike, but still).

Speaking of MacPherson, he's risking his sanity for the edification of his readers, as he's planning on reviewing all 52 of DC's "New 52" as they're released, thanks in large part to sponsorship from a trio of comics retailers. I wish him luck, and look forward to reading the results. Here's his review of Justice League #1. My fellow Robot 6 contributor Steve Sunu is doing the same (Check it out! His post has, as of this writing, exactly 52 comments! Eerie!), as is Robot 6's DC-focused blogger Tom Bondurant.

I was quite surprised to hear the name "Joann Sfar" while listening to a fiarly glowing review of the new film Gainsbourg: A Heroic Life on NPR the other day. Not content being a great comics artist, Sfar is now doing film too? Sounds like. NPR also has a nice, long feature story on Sfar and his film.

I rather enjoyed Chris Sims' "The Best and Worst Justice League Lineups of the Past 50 Years!" article for Comics Alliance. I think he was a little too tough on the 2003 League by Joe Kelley and Doug Mahnke, which he deems "The Replacement League." (Kelley and Mahnke started with Mark Waid's leftover "Big 8" League of the Big 7 + Plastic Man, sent them all back in time so as to leave the prsent without a Justice League, then formed a new (awesome) replacement League and then, upon the original League's return from the past, formed a new team that combined characters from both).

Sims writes that, "The quality of Kelly's run is a subject that has very nearly pushed the ComicsAlliance staff into drunken fistfights at the San Diego Comic-Con," and I'd take the Whoever's Against Sim side of that fight. Admittedly Faith was an awful, awful character, but I enjoyed Kelley's run, and I think it reads even better now than it did then, when Kelley had the unfortunate luck of following Grant Morrison and Mark Waid, two of the decade's best writers of superhero comics, and, because of whatever insanity was going on at DC at the time, his run sort of petered out, segueing into a miniseries where he had access to relatively few of his characters, while JLA became an anthology series for fill-in teams, and the the major members of the cast became involved in all the goofy Identity Crisis to Infinite Crisis shenanigans.

Kelley and Mahnke's run seems 500,000% better when read now, with full knowledge of how awful the book would become in the years that followed, too. 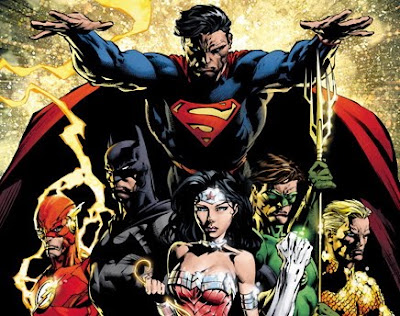 Back to the subject of JL #1, a great deal of the discussion has revolved around how much or how little was actually in the comic book, with a lot of folks coming down pretty hard on the fact that it only prominently featured two of the seven heroes on the cover within its pages, a third making a cameo and a fourth having his secret identity and new origin story begun. This is a subject for another post, but you won't see too many #1 issues of Justice League comics without the Justice League actually in them. For the moment, I just want to point out that a few months ago, DC published a $3.99 comic book by Geoff Johns and one of the hottest, most popular artists they've ever worked with entitled Flashpoint #1, in which readers were given 34 pages of story that:

a) Reviewed who the main character, The Flash was, including his origin story, his powers and offered a look at the DC Universe as it should be (the last bit in a two-page spread featuring around 15 superheroes)

b) Introduced us to an entirely new world and setting, one never before seen in DC Comics

c) Introduced 18 new super-characters to varying degrees of thoroughness (Readers get to know quite a bit about the status and personalities of Cyborg and Batman, for example, while the others are simply introduced by name, allegiance and perhaps a character trait or two)

d) Introduced two major conflicts, one a smaller scale, personal one that the lead character must deal with (What happened to the world The Flash knew, and how can he change it back?), and one that will draw in the entire new cast (An apocalyptic war between Aquaman and Wonder Woman could destroy what's left of the world)

By contrast, Justice League #1, which was also a $3.99 comic book by Geoff Johns and one of the hottest, most popular artists that DC has ever worked with 24 pages of story that...well, that didn't do all that much, compared to Flashpoint #1, which is about as apples-to-apples as you can possibly get in comparing comic books to one another.

As I mentioned in my review of Justice League #1, it is a tough comic to assess critically because when we're talking about Justice League #1, we're not just talking about what's between the pages (although, if we were, then it's a decent, if radically over-priced, superhero comic), we're talking about it's quality and effectiveness in the context of the expectations DC Comics built up around it. Justice League #1 wasn't supposed to be a comic book, it was the "shock and awe" portion of DC's new campaign and, well, like a lot of readers, I didn't find it very awesome, even when compared to Geoff Johns-written first issues featuring the most popular characters of the DC Universe that the publisher published within the last six months. (Above: Superman attempts to tackle the Justice League from behind on David Finch's variant cover for JL #1)

Now this, this is how you reboot, refocus and relaunch your Superboy comic to appeal to a mainstream, mass audience readership. (Via Sean T. Collins)

This "Try To Sit Like Mary Jane" thread is pretty funny. (I saw it first at Comics Reporter)

A few nights ago, I was tossing and turning in my bed, unable to fall asleep, thoughts of DC's New 52 racing through my head. Specifically, I was thinking about writer/artist Matt Wagner, responsible for Mage and Grendel, as well as a 1992 three-issue arc in Legends of The Dark Knight ("Faces"), a couple of Grendel/Batman crossovers, short story in the original Batman: Black and White miniseries, a 2003 miniseries Trinity, 2005 six-issue series Batman and The Monster Men and 2006 six-issue series Batman: The Mad Monk.

I was thinking about this popular, critically-acclaimed writer/artist and the substantial body of work he's produced for DC Comics featuring their Batman character because of the fact that DC's "New 52" initiative seems to rely fairly heavily on writer/artists (certainly compared to the number of writer/artists the publisher employed on their monthlies five or ten years ago) and that two of those writer/artists have been given their very own Batman books to play with. Tony S. Daniel will continue his Batman run into the all-new, relaunched Detective Comics #1, and David Finch will continue his ineptly published Batman: The Dark Knight, which managed just five issues over the course of a year despite the help of several co-creators before being realaunched with an all-new #1 (and a more permanent co-writer and co-artist).

I wonder if DC decided to keep the same writer/artists responsible for two of the "Old DC" books on the "New DC" books because all of the more talented, more proven, more professional, more different and more-likely-to-appeal-to-new-readers writer/artists like Matt Wagner turned them down first...?

Numbers are scary things. Listen to The Beat's Marc-Oliver Frisch's introduction to the latest installment of his monthly analyses of DC Comics' monthly sales:

Here’s a number for you: Out of 65 DC Universe comic books published in July, 32 were by the writer/artist creative teams listed in the solicitations — less than half of the bunch.

Most of the others were either completely drawn by guest artists or had help from one or more of them. And for a couple, even the story credit changed. Not counting the six DC Retroactive books, the video-game adaptations and the New Wave titles, none of which are involved in the day-to-day of the DC Universe, the strike rate is 22 out of 55. So, presuming that’s not a coincidence, it looks like the big DC relaunch was about 40% well-planned, at this juncture.

The above image, for example, is not by George Perez, and I scanned it from a comic book I purchased specifically because I was told George Perez would be drawing it.


And, finally, let's take a moment to remember what we've lost this week...
Posted by Caleb at 9:38 AM

I don`t think that we should cry too much about Supermans pants. They`re supercomic pants. They`ll come back.