Review: Two-Face: Year One (Or, Can Caleb Squeeze One More Post Out of a Single Trade Collection?) 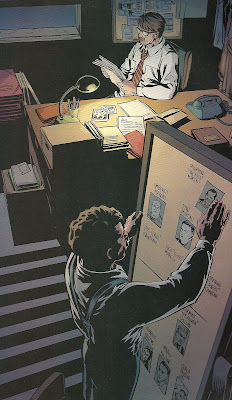 Mark Sable, Jesus Saiz and Jimmy Palmiotti’s 2007 series Two-Face: Year One miniseries had an uphill climb from the get-go.

Saiz is a decent artist (that is, he’s very competent, which makes him seem pretty brilliant in the context of 2007 DC superhero art), but while his layouts and drawings are all solid and readable, he lacks the flare and style of the artists that the story he’s been assigned to draw constantly references.

As I talked about the other day, this story is set during Harvey Dent’s transformation from crusading district attorney to deformed supervillain, and rather than overwriting or contradicting the previous stories on the subject matter, it seems to take place during them—repeating (and thus rewriting and redrawing some scenes), and filling in blanks you probably didn’t even know were there.

Saiz is good, but he’s not Tim Sale, nor is he David Mazzucchelli. It probably doesn’t help either that the two issues of the miniseries had some pretty great and rather inspired cover art by Mark Chiarello— 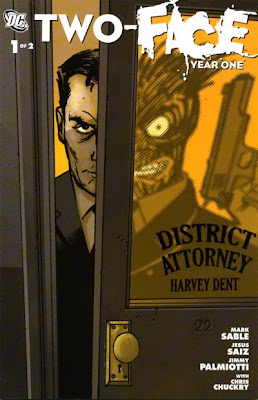 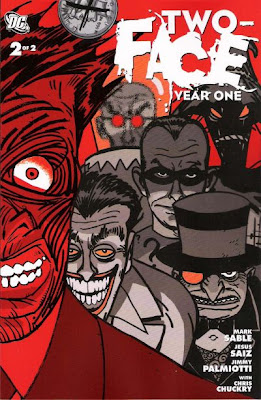 —or that DC decided to collect it with Year One: Batman Scarecrow, so Saiz is following the highly stylized Murphy.

Sable’s script is pretty much a textbook case of how not to do serial comic book continuity. Re-telling stories, even ones that are less than ten years old, isn’t, in and of itself, a bad thing—the case could be made that retelling Long Halloween to focus on Dent/Two-Face, excising the bits that don’t pertain to him, and emphasizing the parts that do by showing them through his eyes.

But Sable and/or Saiz and/or their editors (with whom the buck for this sort of problem should stop with), seem obsessed with fitting this into existing continuity, but they go ahead and keep making mistakes.

Several characters introduced to the Batman franchise in the late ‘90s, mostly during Greg Rucka’s run and given greater exposure as part of the ensemble of Gotham Central, appear here.

Similarly, Two-Face’s gang, consisting of all the name villains who were around at the time, includes some characters who were absent from Long Halloween and shouldn’t make their debuts until much, much later in Batman’s history, like Clayface II Matt Hagen (1961, in a story featuring Robin), and Man-Bat (1970, in a story set after Batman had worked for years with Robin and Batgirl), Killer Croc (1983, in a story featuring Robin Jason Todd) and The Ventriloquist (1988, after Batman had been through two Robins). 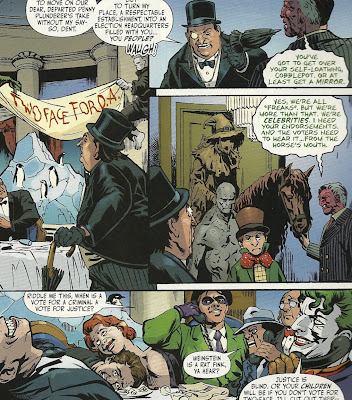 Those characters mostly just mill around in backgrounds, getting maybe a line or four between them, but their presence contributes to the weird confusion of a story supposedly set so many years ago, at the start of Batman and Two-Face’s careers. Heck, there’s even a scene set in The Penguin’s club The Iceberg Lounge, in which he makes it sound like he’s the kingpin of Gotham organized crime, a role he wouldn’t take on until the mid-1990’s.

Basically, it’s a Year One book that seems set during Year Nine or Ten, and while it might be tempting to quit worrying about the continuity and enjoy the story on its own terms, that’s fairly impossible given the fact that the book’s raison d’etre—revealing the origin of a long-time comic book character—is to establish continuity, and Sable goes so far as to have characters from Long Halloween wander in and out of the book, and references being made over and over to the events of that book.

I rarely managed to go a few pages without trying to remember what exactly happened in Long Halloween, where I should know this or that character from, and wondering why characters from so “late” in the Batman mega-story were appearing so early.

That, and thinking things like, “Wow, I like the way Tim Sale draws a board full of Holiday suspects better than the way Saiz does.”

There’s not really much new to the story, either. What doesn’t seem borrowed and expanded on from Long Halloween seems to be covering the same ground that was covered in the two-part Batman: The Animated Series episode that introduced Two-Face.

My favorite part of the whole story is this one, though, where the SWAT team storms Two-Face’s hideout in the Penguin’s club, guns blazing, shooting-to-kill. 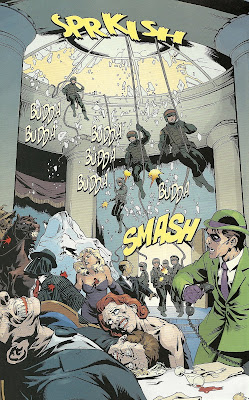 Naturally they miss every single one of the villains, but manage to take out Scarecrow’s horse, one of Two-Face’s thugs, someone’s moll and even an innocent bystanding penguin.

A few pages later, there’s a scene of police and paramedics rounding up the badguys, and we see an uninjured Joker and Riddler, a wounded Ventriloquist and Scarface and that poor penguin, floating face down in its pool. 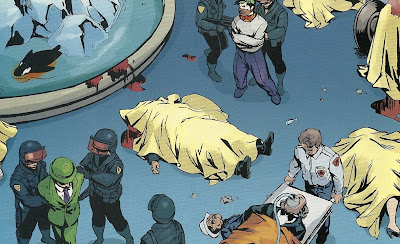 Maybe all the continuity mistakes are because of that dastardous superboy prime, who punched out the walls of the multiverse! Oh,
if I would get to write him, I`d show him...

Tim Sale is a fantastic layout artist, but his finishes are dreadful. He draws some of the ugliest, most amateurish faces this side of Igor Kordey. When you want to impress people by showing you don't go in for that shallow "drawings that look like actual people" style of comics art, drop the name of Tim Sale. Kevin O'Neill also works.