1.) There are two images of Mothman in author Judith Herbst’s Monsters (Lerner Publications; 2005), a slim, heavily-illustrated, 50-page volume devoted to introducing young readers to a handful of paranormal entities. 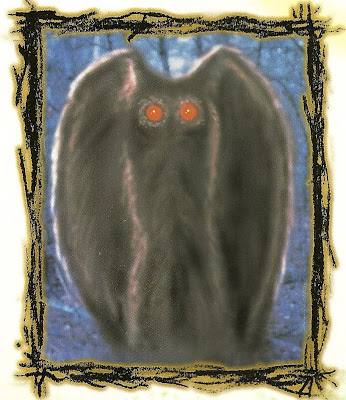 The credits say that the image, which is obviously a reconstruction based on one of the famous witness drawings of the creature, is by Raymond Buckland and from the Fortean Picture Library.

It’s quite similar to William Rebsamen’s depiction for the cover of Loren Coleman’s 2002 Mothman and Other Curious Encounters.

The following page features an original illustration by Bill Hauser: 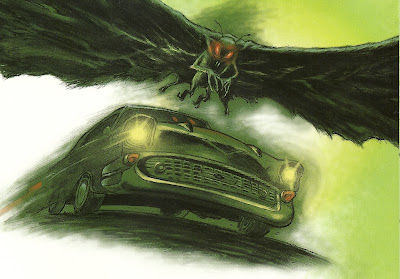 He draws an especially insect-like Mothman, in the act of pursuing the Scarberrys and Mallettes during their encounter with him in November 1966.

It’s not as accurate an image as the above one, but its an evocative one. The wings are gigantic; the right one stretches over onto the previous page.

In part two of the book, by writer Margaret Rau, there’s a chapter entitled “The Spectres” that contains five stories.

The first of these is “Mothman,” in which Rau offers a four-page summation of the Mothman story, beginning with the November 16, 1966 Wamsley and Bennet encounter with the creature (the story with the dropped child, and the monster on the porch, peering into the windows) and then offering a handful of shorter stories of a few more.

The book is illustrated by artist Jim Sharpe, who draws a black and white image for each of the 84 stories within. Here’s his Mothman: 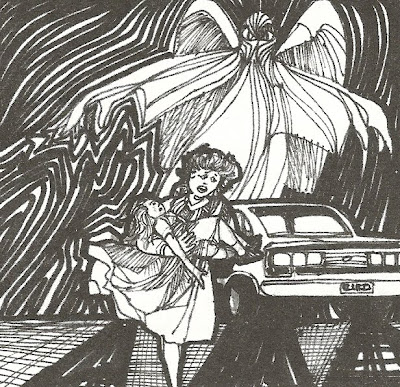 It’s definitely a unique take. Sharpe keeps it well within the bounds of most descriptions—big, all eyes and wings, no apparent facial features, a sort of vaguely human but essentially shape-less shape—and yet it doesn’t really look much like many other Mothmen.

The size is pretty vague too—Is he flying, or standing ?—and the outstretched “arms” could be limbs or they could be some sort of garment, like a big, flowing scarf. I like Sharpe’s linework in general, and after I got sort of tired of the ghost stories within, I still flipped through the book page by page to take in the art.

Here the sketchiness of Sharpe’s linework and the variation of width ads another layer of equivocation to the Mothman’s nature. Are its wings bare? Feathered? Covered in fur? Organic, or inorganic? Sharpe’s lines can be read as any of those options.
Posted by Caleb at 8:58 PM