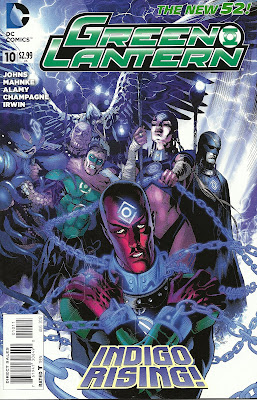 Green Lantern #10 (DC Comics) The "What's Up With the Indigo Tribe, Anyway?" story arc, which is entitled "The Secret of The Indigo Tribe," concludes with this issue. I had three thoughts about this issue, beyond the usual, "Hee hee, Geoff Johns' Green Lantern is pretty silly" and "Doug Mahnke and his posse of inkers draw cool shit." 1.) Hal Jordan says "ass;" I sometimes like to imagine the Hal Jordan in old Silver and Bronze Age comics saying the same dialogue he says today, "Stop screaming about the bank robbers lady, I'll save your ass." "You asked for it, Invisible Destroyer—I'm going to kick your invisible ass." "I've got a date with Carol tonight, Guardians of the Galaxy; you can take my ring, my lantern and my oath to serve and protect all the goofy spacemen in Sector 2814 and shove 'em up your little blue asses." Like that. 2.) Sinestro has been in prison for...well, not for very long, really, but his hair and mustache are always so immaculately groomed. I really want to see a scene of him shaving some day. He's gotta do it at least once a day, maybe even twice a day. Does he have clippers in his space apartment, or does he use his power ring? 3.) The second-in-command Indigo Tribesman, Munk, just looks like a peach-skinned Thanos, doesn't he? 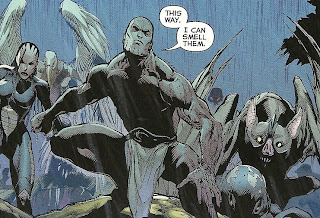 I never noticed before, but the wrinkly chin is kind of a Thanos thing, isn't it? Or maybe a Skrull thing? Anyway, he looks like an alien from the other company's universe.

Others might note Black Hand dying again and being resurrected by as a Black Lantern again by a Black Lantern ring, which I think flies out of his nose—that's kind of weird, isn't it? I don't think DC Comics should go out of their way to make us wonder what is and what isn't in continuity post-reboot, but this issue of Green Lantern disagrees.

Oh, and you know how the Batman line is gradually eclipsing the rest of the DC Universe line, with each round of cancellations making room for another new Bat-title? Well, I can't wait until the next time DC cancels some books and announces a new one. I'm hoping for a Batman Inc spin-off in which Batman spreads his crime-fighting mission throughout the universe—Batman: Batmen of The Galaxy, maybe?—so the Indigo Tribesperson who is from an alien race that is basically just a big bat who can join that team.

Look at this guy: 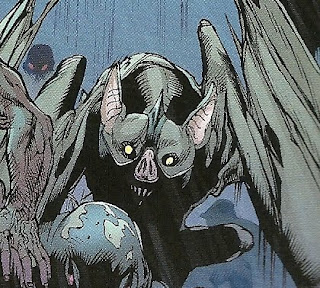 I love that guy. 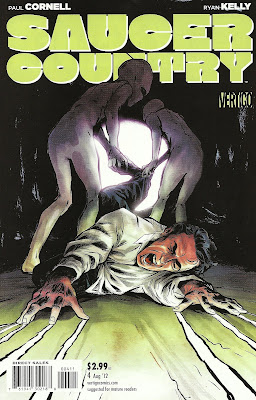 Saucer Country #4 (DC Comics) Wow, writer Paul Cornell really knows his shit when it comes to alien abductions, doesn't he? The bulk of this issue deals with one of the characters recounting his abduction experience, which was apparently heavily influenced by a less-than-objective hypnotist. Artist Ryan Kelly's depictions of the standard gray aliens are pretty fun, particularly in a scene where the character in question describes his fight with them, 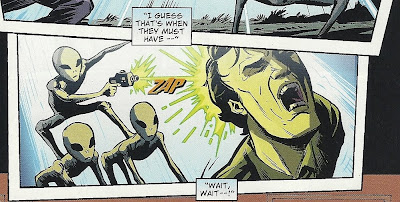 and the looks on their faces when they prepare to probe his ass. 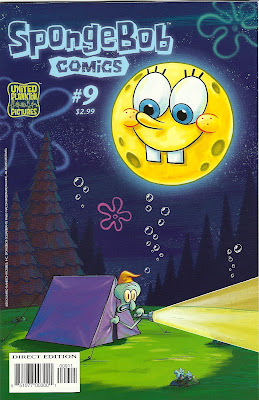 SpongeBob Comics #9 (United Plankton Pictures) The Joey Weiser-written, Graham Annable-drawn, three-page "Sock It To Me" story was my favorite of this issue, although I also really dug the Maris Wicks-written, Nate Neal-illustrated one-pager that offers ocean facts about cephalopods: I love cephalopods so much.

You can't fool me, Caleb. Obviously, you are as mesmerized by Hal's ass as I am.

I`m betting that he uses his "ring-clippers".

Haven`t you been reading Spongebob-comics 3-8 (Or is it 4-8?), or did I completely forget that you`ve reviewed them?

The SC and Spongebob covers are, by the way, really great. Is Spongebob really so powerful, that he can change to the moon? Apparently.