Someone check my math: 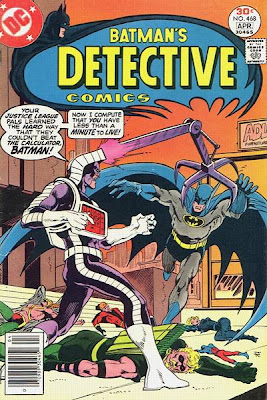 Okay, so Friday DC announced a new Batman spin-off, Talon among a crop of four new books. And earlier today they released the solicitations for their Batman family of books which they plan to ship in September, making it apparent that they aren't canceling any of the twelve existing Batman titles, which means come September there will be 13 Batman titles.

I know Batman is a pretty popular character, but good God, one quarter...? And you know what's weird? Robin/Red Robin Tim Drake, Spoiler/Batgirl Stephanie Brown and Batgirl/Black Bat Cassandra Cain, all of whom have carried their own titles in the past, don't have their own books yet, so it's not actually all that hard to imagine the Batman line eclipsing even more of the DCU line in the near future, as books like Savage Hawkman and Grifter are inevitably canceled.

That... is a whole lot of Bat. I know he's popular, but this is ridiculous.

But also, 6 of May's top 13 best-selling books were Batman titles. 7 if you count Earth-2, which has Batman in it.

And, wow, 8 if you count Justice League. I kind of forgot it existed.

If it turns out that "The Dark Knight"s success was solely due to Heath Ledger, and the next film bombs, will the ratio tip in favor of Superman comics to get ready for WBs next film?

Depending on how you count it, it could be 18/52 until JLI gets cancelled.

It's like they have a billion dollar movie coming out or something.

That doesn't even count the Bat-Heavy other books like Justice League, Justice League International, Teen Titans and All-Star Western (set in Gotham, has the Wayne family, part of the court of owls crossover).

They started with 15/52 being Bat related. Since then they cancelled 1 (JLI), but added Batman Incorporated, World's Finest (Huntress/Robin from Earth 2) and Talon.