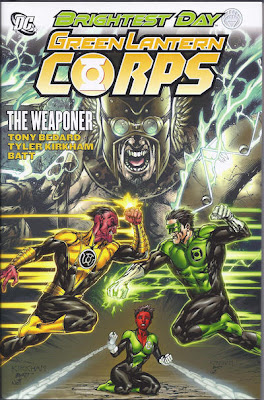 This trade collects the story "The Weaponer" from five issues of the previous volume of Green Lantern Corps, shortly after writer Tony Bedard inherited from Peter Tomasi. These would have been published around spring of 2011, and thus would have been one of the last story arcs in the title before the "New 52" relaunch of the publisher's entire line.

Bedard's story isn't a terribly ambitious one, nor a particularly deep one, but he does a fine job of coming up with a premise to hang a Green Lantern story on, and to continue to do the sorts of things that the today's Green Lantern fans seem to have enjoyed the most from Tomasi and writer Geoff Johns.

Bedard pinpoints a minor character from a minor detail in an ancient Green Lantern story, and extrapolates a story arc to hang around him. Hal Jordan's archenemy Sinestro had a yellow power ring, which was forged by him on the planet Qward in the anti-matter universe, right? Well, someone must have forged it for him, and that someone is the Weaponer of the title, a big, behemoth specimen of the pink-skinned Qwardians, who pencil artist Tyler Kirkham draws as a cross between Roman god Vulcan and your typical Qwardian.

That character settled on and fleshed out, the rest of the story is merely a matter of plugging in the members of the cast and having them react as they are most likely to react, which here involves the two color-coded Corps going to war with one another.

The Weaponer is very upset for Sinestro for several different reasons, but the one that I remember most clearly a week or so after reading this had to do with the time Sinestro returned to Qward, conquered it, and turned it into a sort of munitions factory to build yellow rings and yellow lanterns for his Yellow Lantern Corps, which he calls The Sinestro Corps.

So he wants revenge on Sinestro, and has stumbled upon a powerful weapon to help him do it: The White Light of Creation, which figured rather prominently in the end of Blackest Night and throughout Brightest Day, although Weaponer's possession of it is never really explained...apparently like the rest of the White Light stories, it was going to be resolved at some point in the future, but DC decided to reboot their whole universe, scuttling all of the in-process stories. He uses this light, which appears in the form of a net on the inside of his shield, to instantly create new weapons with which he can counter any enemy, making him a pretty tough customer.

His plan for taking on Sinestro is to capture Sinestro's daughter, bring her back to his place, then wait for Sinestro to show up to rescue her, at which point he'll beat Sinestro up. Not exactly Byzantine, but it works well for this title, as Sinestro's daughter is a Green Lantern, and she's dating Kyle Rayner, one of the stars of the book (co-star John Stewart is largely absent for much of the story, having little more to do than any of the other Lantern characters who fill out the supporting ensemble, like The Big Rock Guy or The Purple Robot Lady).

It is then nothing more than a bunch of fighting. Weaponer Vs. Kyle, Kyle Vs. Sinestro, the Green Lanterns Vs. The Weaponer, The Weaponer Vs. The Sinestro Corps, The Sinestro Corps Vs. The Green Lanterns Vs. The Qwardians Vs. The Weaponer, and so on. It's rather paint-by-numbers, but certainly fun if you like this sort of thing, and there's nothing bad about the story. I remain rather fascinated at how big the Green Lantern franchise has gotten. When I started reading comics, there was one (1) Green Lantern, and DC had killed off Hal Jordan, benched the other human Lanterns, and did away with the entire concept of the Green Lantern Corps. Now there are some six or seven differently-colored Lanterns Corps, and several of them are full of distinct, recognizable characters. Like the X-Men franchise at Marvel, the Green Lantern franchise is almost big and self-contained enough that it can function as it's own self-contained line divorced from its publisher's shared, "universe" setting and, in fact, it might function better that way.

Kirkham's artwork, inked here by Batt and Rob Hunter, isn't as crisp or detailed as that of his predecessor Patrick Gleason on the book, or Doug Mahnke on the main Green Lantern title, but it's perfectly decent artwork, serviceable in its storytelling and its ability to get across the dozen or so very well-designed characters that appear in these books. I liked it a bit better than that of Fernando Pasarin's on Green Lantern: Emerald Warriors.

This story must have taken place at the same time as the first story arc in Emerald Warriors, as it to features a scene where one of it's characters—here, Ganthet—vomits up blood which takes the shape of Atrocitus and delivers a message, and it also hints at the conflict and villain in the "War of The Green Lanterns" crossover story between all the Green Lantern titles. It's nowhere near as crazy, over-the-top violent as Emerald Warriors though, indeed there's only that one scene of blood-vomiting, and the only instance of ultra-violence occurs early on, when The Weaponer hits a Sinestro Corps member on the head so hard with his hammer that the poor villain's head and torso liquify, his severed jaw bone flying toward the reader. After that, it's mostly just ring-on-ring, laser beams and force field violence.

Oh, and Firestorm flies into one of the issues for a while, which is really, really random. I read that scene form a different perspective in Brightest Day, during which it happens in-context. In GLC, we see it from the Lanterns' perspective, and it really does seem like Firestorm is just flying through, on his way from one issue of Brightest Day to the next.

After the reboot, both this title and this creative team would stick around, but not in the exact same way. Peter Tomasi would return to Green Lantern Corps as writer (Green Lantern: Emerald Warriors was scrapped in the reboot), with Pasarin and several others assuming art chores, and Guy Gardner and John Stewart serving as co-stars. Bedard, Kirkham and Batt, meanwhile, moved to the brand new title Green Lantern: New Guardians, which starred Kyle Rayner and representatives of the rest of the colored Corps.

Soranik Natu was one of my favorite of the new GLs introduced after Rebirth, and this storyline just makes me sad that it seems like no stories can be told with her anymore that don't revolve around 1) her being Sinestro's daughter, or 2) her being Kyle's girlfriend. This gets double demerits for involving both those things.