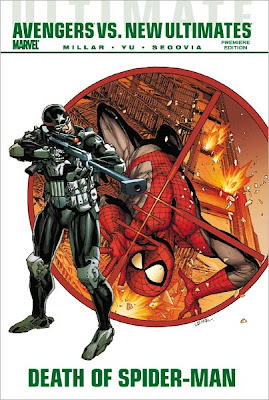 Yes, that is the actual title of this hardcover collection, although the six-issue miniseries it contains was originally published under the only slightly less onerous title of Ultimate Comics Avengers Vs. New Ultimates, with the "Death of Spider-Man" phrase running running as a banner a top each of the covers, where one might expect the title of the book to be, with the actual title running along the bottom.

Whether used as part of the title or merely as branding effort that looks like a title, the phrase "Death of Spider-Man" seems awfully out of place attached to this storyline, and I imagine it must have proven extremely irritating to anyone who encountered this story by paying actual money for it—$25 for the hardcover, or $24 in six monthly-ish payments for the serially-published chapters in comic book form—given how little the story actually has to do with the death of (Ultimate) Spider-Man.

Sure, the cover the publisher ran with was the one featuring a character that looks like a cross between The Punisher and Captain America (it's Ultimate Punisher, wearing something he doesn't actually wear inside the book) taking shots at Spider-Man with a sniper rifle, but you can count the number of pages on which Spider-Man appears in this book, and the number you come up with will be very low. Wait, I'll do it now: It's nine. Nine of the book's 144 pages have Spider-Man.

His role in the story is pretty incidental. SHIELD Director Carol Danvers' team of super-heroes, The Ultimates (Or "New Ultimates" of the title) are basically the old Ultimates Captain America, Thor, Iron Man and a new Black Widow and a new Giant Man, who replace the ones who died (The personnel changes, and the introductions of all of the other characters in this story, apparently happened somewhere between the end of Mark Millar and Bryan Hitch's second volume of The Ultimates and this series; Marvel quit numbering the volumes after a while, and re-branded the line as "Ultimate Comics ____" instead of just "Ultimate ____" somewhere during that time, so it's difficult to tell what happened when, where and in what order). Former SHIELD Director Nick Fury has his own team of super-heroes, who I suppose are called The Avengers. They are a black ops team consisting of The Punisher, Blade, War Machine and Hawkeye.

The two teams fight, with each believing the leader of the other team is corrupt and a traitor who needs to be destroyed. They are both being manipulated by a third party, who is so firmly ensconced in the cast that I suppose he was previously introduced as well. About two thirds of the way through the book, the two teams are fighting in New York City, and when hometown hero Spider-Man sees The Punisher training a sniper rifle on Captain America, who is busy beating the shit out of Nick Fury without letting his old friend and ally explain himself (because Ultimate Captain America is a psychopath), he decides to intervene. Not by webbing The Punisher's gun nozzle, or webbing Captain America to safety, or doing anything at all very Spider-y, but rather by jumping in front of jumping in front of Cap just in time to get shot in the side.

He's pretty badly hurt, but Captain America assures Spidey and the reader that it was "a clean shot," and that he was going to be fine. The Spider-Man disappears for 60 pages, with two panels of the epilogue devoted to letting the readers know that he is, in fact, dead; one of these shows his funeral in extreme long shot (That didn't stop it from being the cover of the sixth issue, though).

Did Spider-Man die as a result of the gunshot wound he suffered? I know from reading news sites devoted to comic books that he did not, but it is completely unclear from this book, which is, you'll recall, partially entitled "Death of Spider-Man."

The series was written by Mark Millar, and it was kind of a depressing read in that it seems to fit so seamlessly with what he was doing in his first two volumes of The Ultimates and his Ultimate X-Men and Ultimate Fantastic Four, back when Marvel's "Ultimate" brand and "Ultimate Universe" setting were so carefully constructed and curated by Millar, Brian Michael Bendis and a handful of artists. This suggests a comic book series or story that has been going on since the beginning of the Bush administration—the villain's plan, by the way, is to both covertly and overtly arm revolutionaries in axis of evil countries with super-powers to topple their regimes—and yet there isn't actually a straight line from what Millar was doing with Hitch way back when and what he is now doing here with artitsts Leinil Francis Yu and Stephen Segovia.

Rather, the "Ultimate" line ran into Jeph Loeb, his strange take on the concepts, the "Ultimatum" cross-over, his Ultimate X, re-titling, re-booting and a general 180-degree turn away from the premise of The Ultimates and the Ultimate line.

The uncomfortable grafting-on of "Death of Spider-Man" aside, it's a fine comic, featuring all of the positive aspects one might expect from a Millar-written or Ultimamtes-starring comic—widescreen, action-movie inspired action scenes, self-consciously cool dialogue and lines—without any of the negative aspects one might dread from a Millar-written or Ultimates-starring comic.

Yu's art is particularly good, and I was a little surprised to see how well he could do Hitch-like versions of the characters and present a Hitch-like world. He's not imitating Hitch by any stretch of the imagination, but he can do realism quite well when he wants to, and the majority of this book has an extremely similar visual aesthetic to the original Ultimates comics.

I've always liked Yu's art, or at least what I've seen of it. I like the way he draws the tops of the bottoms of character's eye-lids, and all the times he draws characters with open-mouthed, teeth-baring faces. I'm not sure what this expression is mean to convey, exactly, but I like looking at it, and the fact that it's as distinct to Yu's comics work as a signature. 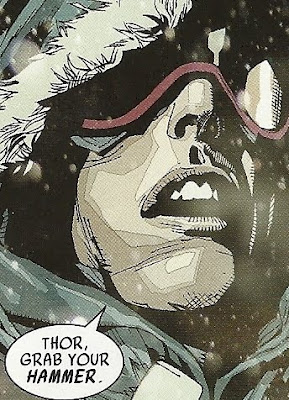 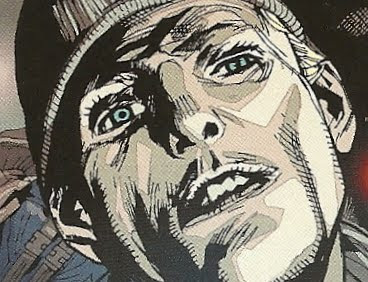 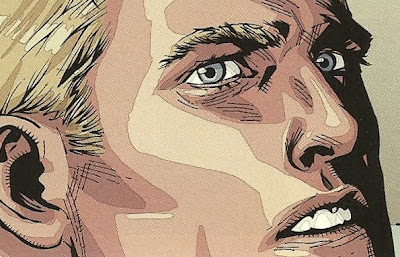 I like Millar's version of Ultimate Punisher, who differs from Regular Punisher in that he's slightly more insane, and Millar doesn't play as coy with that fact as writers-who-aren't-Garth Ennis usually play with the regular Punisher. 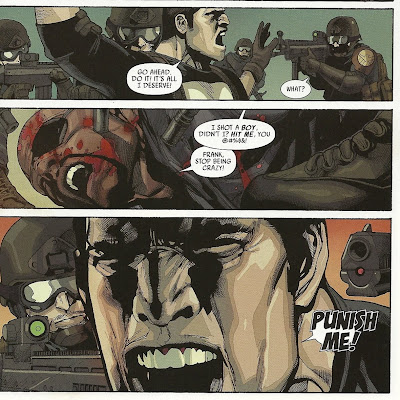 I also liked seeing vampire hunting vampire Blade in here, and seeing how well he fit into the Avengers-like milieu. Regular Blade could certainly be a regular Avenger in the regular Marvel Universe.

Despite being poorly labeled and poorly marketed, this ended up being a decent enough read, and was certainly far better than I expected (Even Millar's "African-American Hulk" didn't induce cringing!), and well above average in terms of a comic series starring the Ultimates (or New Ultimates or Ultimate Avengers or Whoever).

By the way. See this lady? 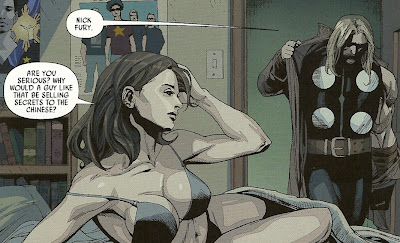 Did you know Natalie Portman played this lady in a movie? It's true!

I agree with you about this comic. It was an extremely pleasant surprise after the first three Ultimate Avengers series, which just wallowed in Millar's excesses. Here he's able to tone down the dark humor enough to actually have a story. It was a lot of fun, and had the inventively iconoclastic moments that made Millar interesting in the first place.

Absolutely loved some of the retcon explanations Millar made for the stupider baggage of the Ultimate Universe, such as making Orson Scott Card's Ultimate Iron Man series all just a cheesy anime, and having Tony pay Thor with charitable donations to get him to drop the Faux-Shakespearean vocabulary.