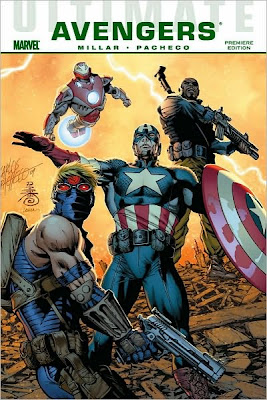 Anyone trying to read the comic books Marvel published in their Ultimate universe imprint, which has changed its name from simply "Ultimate" to "Ultimate Comics", featuring that imprint's version of the Avengers characters has my sympathy.

And then? Well, there was 2009's five-issue Ultimatum, one of at least a half-dozen miniseries featuring the word "Ultimate" or a derivation of it in the title and starring at least a sizable swathe of the characters from The Ultimates cast (You know, Ultimate Enemy, Ultimate Fallout, Ultimate Nightmare, Ultimate Secret and so on). And then there were Ultimate Avengers, Ultimate New Ultimates, Ultimate Comics The Ultimates, Ultimate Avengers vs. New Ultimates...all miniseries, most by writer Mark Millar, and few appearing in trade collections that have the exact same title as the comics had when published serially, and some not even having the same title on the cover of the actual book as the one that's on the title page of the very same book.

Why doesn't the mass audience that loves superhero movies read superhero comic books featuring the same characters they love? Because the people who publish those comics are crazy people doing their damnedest to keep people from reading them.

Just a theory. Anyway, this is written by Mark Millar, the guy who re-created Marvel's Avengers as "The Ultimates" along with artist Bryan Hitch, and I think it's his triumphant return to the characters, after Jeph Loeb had his way with the franchise in Ultimates 3 and Ultimatum (I say "think" because, like I said, I can't really make sense of the series now that it's a series of miniseries with ever changing titles; this was published in 2010, though, which would have been right after Ultimatum). It is penciled by Carlos Pacheco, and inked by five inkers.

What I found most notable about it was that it was not very good, nor was it very interesting, not even in the ways that Mark Millar-written comics can be good (or, sometimes, "so bad they're good" or, at other times, "so incredibly, insultingly terrible that they are fun to read" or, at still other times, "so aggressively juvenile and so desperate to be adapted into a movie that they are funny"). Compared to his first 26-issues featuring these characters, or a later story featuring some of them, it seems rather phoned-in and lifeless.

Then we turn the page and we get a two page splash, in which we see The Ultimates' headquarters, looking like it always does, with Samuel L. Jackson and Ultimate Hawkeye (still in the unfortunate costume that Joe Madureira designed for him in Ultimates 3) in the foreground. The building looks clean and pristine, although there are a couple of cranes and a bit of scaffolding in the upper left-hand corner.

"I disappear for ten minutes and the whole place goes to hell," Jackson says, in direct contrast with the image. It looks like The Ultimates are maybe adding an addition to their base in a rather ambitious remodeling project, not like they have hired contractors to help them build their way out of hell.

Ultimate Hawkeye is recruiting Jackson to help him go after Ultimate Captain America, who has "gone rogue" because he "knows about The Red Skull."

Millar then flashes us back one day earlier, to when Cap learns about The Red Skull, the first issue/chapter ending with the surprising revelation of the connection between the two, which I will now reveal so "spoiler warning": Ultiamte The Red Skull is not a Nazi like Regular Red Skull, he's a neo-Nazi who is also Captain America's own son! Eh? How about that? Didn't see that coming, did you?

Apparently before going off to die in the war, Cap knocked up his girlfriend, the government took her baby away, made him into a super-soldier due to the fact that he inherited his dad's super-soldier serum through is dad's, um, super-soldier serum. But it turns out he was a bad seed, killed all his trainers, and then peeled off his own skin leaving only red, gory muscle tissue which somehow never healed up or scarred over, but remained red forever. And he got some tattoos on it. He went on to become a mercenary.

So now Captain America wants to beat him up or kill him or something, and the feeling's mutual.

It's a good thing they put some iron cross tattoos on Ultimate The Red Skull's head, and showed him throwing a baby out the window, because otherwise it's really, really hard to root for Millar's Captain America, upon whose head the "A" stands for France, but Asshole. As in, Captain America: Total Asshole.

I must admit, however, that Captain America being an unlikable bully and super-jock is at least occasionally amusing: 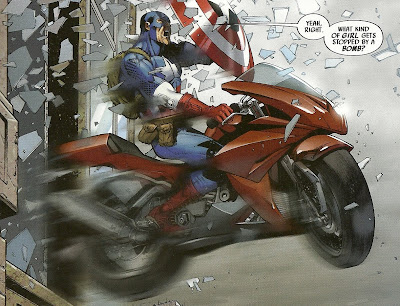 In order to bring in Cap, Jackson must assemble his Avengers, who are all new characters, or at least new versions of characters. 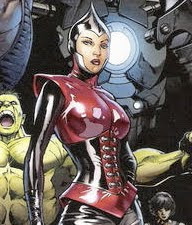 So Cap's trying to kill Red Skull, The "Ultimate Avengers" are trying to stop Captain America and also kill The Red Skull and things proceed as expected: Everyone fights a lot, and The Red Skull gets killed (Captain America impales him on a pointy bit of a jetplane, although the Skull manages to survive...only to be shot in the face by another of the Avengers).

Millar's political commentary is fairly muted and confused here, limited to Jackson dissing Obama by saying "our nice, new president" had "castrated" his military organization, which would only embolden supervillains (Obama never appears on panel, as Bush did in Millar's original Ultimates run) and a few terrorists talking about Secretary of Defense Hilary Clinton's cankles. The "heroes" remain ruthless, unlikable fuck-ups, with the worst offender being the guy with "America" in his name. Millar's Captain America kicks The Hulk in the nuts, calls all The Avengers grade school insult names and not only doesn't support the troops, he repeatedly sucker punches and beats them all up.

This hasn't changed since Millar's 2002 comics about the characters, of course, and so if Millar was saying something, he's not saying anything different. Was The Ultimates a commentary on Bush Era America? Then why is the commentary the same, as we enter the Obama Era?

Regardless of the relative weaknesses of the scripting, Pacheco and his quintet of inkers do a fine job, and this serves as a pretty good argument that while Hitch did a hell of a job on the first two volumes of The Ultiamtes, he was hardly the only human being capable of producing highly realistic (to the point of being photorealsitic), "widescreen" superhero action comics that nevertheless look more drawn than photoshopped.

I suspect this may read better as a whole, just as Millar's original Ultimates comics read better in their 13-issue blocks then they did as individual issues, but the comics aren't as easy to read like that anymore. For one, Millar's no longer in control of his own little universe, as here he's responding to events in comics written by Jeph Loeb and Brian Michael Bendis and, as would happen in a later story (which I actually read first) the sorts of crossover tie-in demands that the Ultimate Universe was conceived as being exempt from. For two, The Ultimates is no longer an identifiable brand or franchise, or easily follow-able series of comics. Rather, it's now a series of miniseries by different creators, and one need consult one's local comic shop for expert advice on what to read and in what order.

The confusing titles of these collections make me grateful for Wikipedia. Without it I'd be lost.

Speaking of which, why doesn't Marvel have a collections reading order on its website? Too obvious and helpful?

Stop reading these now before you get to it being revealed....well should I spoil it or not? Let's just say Millar does get kind of political with someone in politics becoming a Ghost Rider....and its the most stupid thing there is.