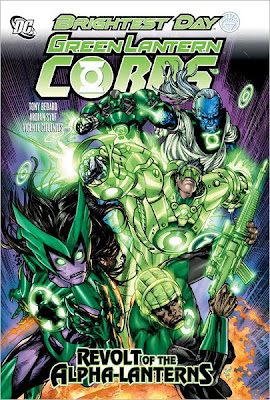 The title story in this collection is pulled from Green Lantern Corps #48-52, and it seems to be a companion story to the first story arc from the short-lived tertiary Green Lantern title, Green Lantern: Emerald Warriors (reviewed here).

As was the case in that storyline, a group of Green Lanterns are thrown into conflict with a major villain from their past, and, as the story reaches its climax, we find that the villain was being manipulated by the villain from the "War of the Green Lanterns" crossover story. So "Revolt of the Alpha-Lanterns," like Emerald Warriors, is something of a prelude to "War of the Green Lanterns," or simply an exercise in killing time until that storyline could arrive to commandeer the scheduling of all three books, depending on how generous you want to be.

The villain here is The Cyborg-Superman, who has become a sort of de facto Green Lantern villain due to the events of "The Reign of the Supermen" story, in which he and Mongul destroyed Green Lantern Hal Jordan's hometown of Coast City, driving Hal bonkers. (Geoff Johns made use of the Cyborg-Superman in his "Sinestro Corps War" story.)

His plan is a little loopy. He has the power to control all machinery, and he's used it to usurp the programming on the Alpha-Lanterns—which, if you don't read Green Lantern, are a group of Green Lanterns that the Guardians turned into robot super-Lanterns and tasked with serving as Green Lantern Corps Internal Affairs; that is, they're the police who police the space police. Holding them mind-controlled hostage, he wants to force a Guardian (Ganthet who, at this point, has demoted himself to a regular old Green Lantern) to turn them back into organic beings and, once he's demonstrated he can do this, he can turn the Cyborg-Superman back into a normal human being. And then he can commit suicide, as all he wants to do is die, but his existence as a sort of electronic ghost that possesses robots and stuff prevents it.

Green Lanterns Kyle Rayner and John Stewart, plus Ganthet and Sora and The Big Rock Guy, must brave a planet full of robots and Alpha-Lanterns all controlled by the Cyborg-Superman in order to save the day.

While the Cyborg-Superman is essentially the star of the storyline, some attention is given to Alpha-Lantern Boodika, who goes through something a transformation in the story, proving that even though she now looks like a robot, she's still the same person underneath it all (Following this story, the trade includes GLC #21-22, a Boodika-focused fill-in story by writer Sterling Gates and artists Nelson, Derek Fridolfs and Rob Hunter; it's awfully generic, although Boodika fans who want to know more about her life before she was a robot might find it of greater interst than I).

The artwork is from pencil artist Ardian Syaf and inker Vicente Cifuenetes, and while it's passable, it's also probably the worst I've seen on this title, which was previously drawn by the great Patrick Gleason and would later be drawn by Tyler Kirkham. Kirkham's art is, like Syaf's, rather rough, even ragged around the edges, but Kirkham's compensates with a lot of movement and energy.

Syaf's looks, at first glance, as overly futzed-with Dan Jurgens art (that is, with Jurgens-like layouts and figure works, but a lot of not-always-necessary lines in them), and the settings seem like fairly generic sci-fi ones. Backgrounds tend to disappear for long stretches, and the anatomy can be...lacking: 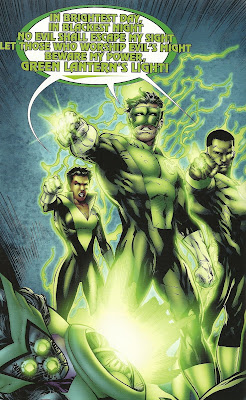 This probably isn't his fault, but he does draw John Stewart with a ring-generated army guy costume and rifle in several panels, so that John Stewart looks like an idiot:

I know there's a "story" reason for why Stewart makes rifles out of his ring energy (because he was retconned to be a marine sniper, and holding a sniper gun apparently helps him concentrate), but is the cosplay really necessary? The ring does generate a forcefield, and will automatically protect him from harm, so I'm not sure what the glowing green army helmet does, beyond make him look silly (And maybe it calms his nerves in-story, but I don't know, it's not very heroic; that would be like me using a power ring to generate a glowing green version of the blanky I used to carry around as a toddler whenever I had to infiltrate an enemy robot stronghold).

The robot centaur I spotted on a cover for an upcoming issue appears in this. 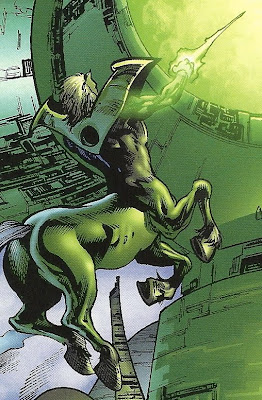 Finally, props to the art team for their depiction of blood-vomitting Red Lantern Atrocitus: 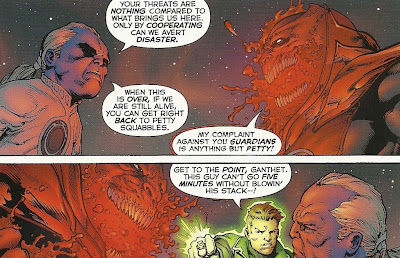 I like the way they draws his blood-vomit as something of an aura or face halo; instead of simply running down his face like drool and occasionally being fired at foes like a projectile, it hangs around his face like a cloud.

But my single favorite image in this collection is definitely the variant cover by Patrick Gleason, which shows Ganthet forging his own Green Lantern ring and lantern: 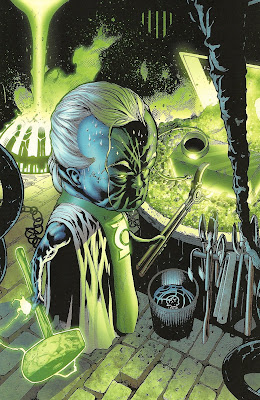 The scene in the story is kind of cool in the awesome/stupid way that the Geoff Johns era of Green Latern comics is, as there are apparently willpower mines on Oa (?), and the willpower ore is, like, smelted, and then poured into a mold, and then the Guardian has to recite the oath so hard that he sweats and leads blood out of his face (?!).

I mainly just love how huge Gleason draws Ganthet's head though, and how spindly—but still muscular—his bare arms are.

While reading, I discovered that this storyline explains where The Weaponer from the later story arc (reviewed here) got his magic white light net (the explanation is dumb, but at least it's an explanation), and also how the Cyborg-Superman got inside an Alpha-Lantern in order to appear in that "Return of Doomsday" storyline (reviewed here).
Posted by Caleb at 5:21 PM

" there are apparently willpower mines on Oa"

(I lean more to the "stupid" than to the "awesome" side when it comes to Johns' GL ideas.)

A centaur Green Lantern IS a very nice idea. I rather liked the Alphas in this particular storyline, they've been behaving rather badly since.