Daredevil #14 (Marvel Entertainment) Trapped in a castle in Latveria (no Doom appearance, despite the cover), our hero is exposed to a mysterious gas (Confidential to everyone who writes comic books: I'm soooo sick of seeing the prefix "nano-") that is slowly eliminating his sense, one by one. Can he make it to the Latverian border before he loses all of his senses?

That's the fun of this issue, by Mark Waid and Chris Samnee, although there's also some plot advancement regarding Matt's relationship with Foggy and that girl he took on a date a few issues ago.

This issue also includes Daredevil on a horse... ...which, for some reason, just isn't as exciting as Batman on a horse. Maybe it's the lack of cape...? 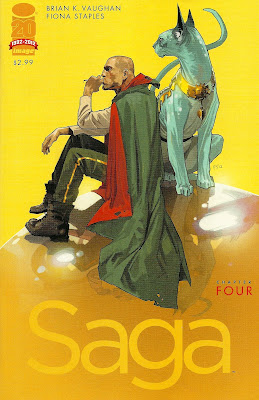 Saga #4 (Image Comics) No lie, no hyperbole: I opened the cover of this book and jumped in my seat. The image on the first page, a splash page, was probably the last thing I expected to see, and it surprised, frightened and freaked me out a little. So good job Brian K. Vaughan and Fiona Staples!

The rest of the comic's not too shabby either.

Wonder Woman #10 (DC Comics) I actually had a little trouble making sense out of this issue. It opens in Hades, where Wonder Woman is about to marry Hell (which is what they're calling Hades in the book). He ties a noose of her lasso of truth and makes her wear it and answer if she loves him or not. She says yes (Wonder Woman loves everyone, you may remember).

Then she hears the word "bind", and freaks out, running away from the ceremony and attempting to escape Hell (the person and the place which, here, are one and the same thing), the only explanation of her actions being these: "Bind me? With proof--not trust? I won't be bound that way to any man... Woman...or god."

Wonder Woman hates proof! She did horrible in math when she was in school because she refused to show her work!

I suppose her plan all along was to flee Hell at the crux of the ceremony, as marrying the god of death probably didn't jibe with her long-term career plans anyway, but the way it's presented is kind of strange. I've read the scene three times now, and I can't make sense of Wonder Woman's motivations in it. Unless the whole point was for her to demonstrate how much she loves everyone, even the creepy little god of death who was trying to force him to marry her, and making her escape once he was pretty sure she was going to go through with marrying her, but, I don't know...I'm just making guesses at what I see in the text.

Beyond that and a little-don't-think-about-it-too-much glitch (all of Hell is made out of Hell, so he controls everything in it and can thus attack Wondy from all directions constantly, although the dress he gave her and the skinless horse she rides...I guess Hell imports its wedding dress fabrics and skinless horeses...?), brian Azzarello's script is fairly well structured, and the ending has a very nice little demonstration through actions of what Azz had Wondy babbling about at the beginning. It was also nice to see her attempting to convert a foe through kindness and love, Golden Age style, rather than beating the bejeezus out of a foe, post-Kingdom Come style (although there IS some pretty serious gore before the end).

The Elvis Costello allusion was a bit much though, wasn't it?

The art holds together fairly nicely given the fact it's from two different artists, Kano handling the first half of the book and pencil artist Tony Akins and inker Dan Green the second half. Kudos are due to colorist Matthew Wilson for blending the art together so well and, I suspsect, to Kano, for drawing a bit more like Akins (and in the Chiang designs and style) than usual.

Flipping through it now, it's easy to see who drew what, and where the artists changed, but, in the first read-through, I barely noticed, and it only slowly dawned on me that some of the characters looked different now.
Posted by Caleb at 8:33 AM

Glad to know that DD is great again (instead of mediocre).
Maybe it`s because DD isn`t as dramatic on that pic, than Batman is in that pic where he rides a horse.