DC vs. The Dewey Decimal System, Round Two 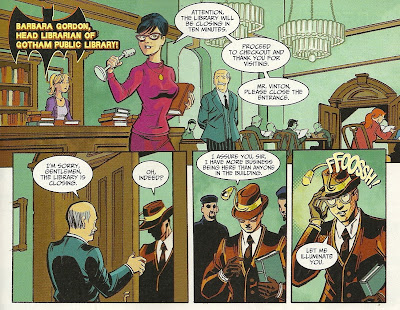 Last week's Batman '66 #18 featured one of those stories that "had to happen," as the excitable covers of old Marvel Comics might have said: Batgirl, whose secret identity is the head librarian of the Gotham Public Library, versus Bookworm, the literary-themed villain original to the TV show that this comic is based on.

Entitled "Bats, Books and Crazy Crooks," this Jeff Parker-written, Richard Case-drawn comic is a lot of fun. Bookworm and his beatnik henchmen muscle their way in to the Gotham Public Library at closing time in an attempt to steal its rarest book, The Cleoveritas, "a repository of occult knowledge." His plan is to force Gordon to open the display case for him, but she runs off into the stacks, in order to transform into her crimefighting alter-ego.

There's just one teensy-weensy problem with the story, which, if you are a librarian yourself, you may notice in the panel below: 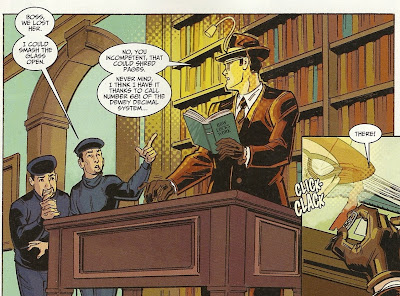 Bookworm picks the lock himself, "thanks to call number 681 of the Dewey Decimal System." That...is not the call number for locks or lockpicking, at least not according to my librarian lady friend, and the DDC22, or The Dewey Decimal Classification Edition 22, which she showed me to prove it.

Now 681 is the call number for "precision instruments and other devices," although it's standard for the number to have a subdivision added to it (681.1, for example, would be the Dewey number for clocks). The book Bookworm is holding in his hand is entitled How Locks Work; locks would fall under call number 683, for "hardware and household appliances" and "comprehensive works on manufacture of hardware or building supplies."

Specifically, it should be in 683.3, "locksmithing," where you'd find books on locks that would include diagrams and detailed information on how they work.

So that brings us to the important question—who is as fault here? Did Bookworm bring that particular book with him, and just misspoke when he said it belongs under the call number of 681? As we've seen in the past, Bookworm has a rather idiosyncratic way of cataloging and organizing books when he's the one in charge of doing so.

Or did Bookworms find that book on the shelf at GPL, and it was therefore head librarian Barbara Gordon's fault that a book that should be under 683.3 was under 681? This seems unlikely, as Gordon is a conscientious enough a librarian that even when she's forced to throw books into the mouths of giant monster beatnik silverfish-men in order to keep them from devouring her, she's careful to use the activity as an excuse to weed the collection a bit. 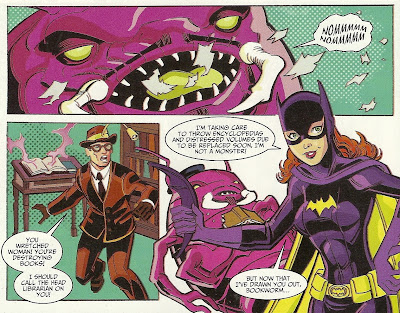 Also, if Gordon had miscataloged the book, how would Bookworm have found it so quickly?

The other alternative? Maybe writer Jeff Parker just goofed, and editor Jim Chadwick missed it. That seems most likely, but oh so preventable, as anyone can call or walk into any public library and ask the reference librarians there what the Dewey Decimal number for locks would be...
Posted by Caleb at 8:03 PM

Or even better, look it up quick on Wikipedia: https://en.wikipedia.org/wiki/List_of_Dewey_Decimal_classes

Though I thought an American library would be more likely to use LoC classification anyway?

I can't speak for Gotham Public Library in 1966, but it's been my experience that most public libraries still use Dewey, while academic libraries use Library Of Congress.

The Dewey Decimal System has been revised about two dozen times since its invention in the 19th century. It would be great if the writers actually checked the version in effect in 1966, and used it correctly, for the comic!