Well these are pretty cool. 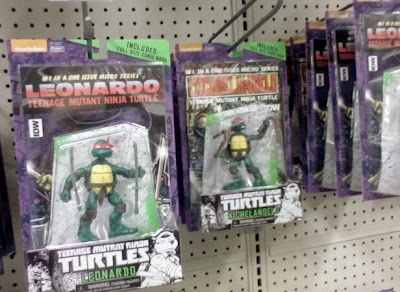 I was a in a toy store this weekend, picking up a very large gift that my sister had ordered for my nephew but didn't want to pay for postage one (But shhh! Don't tell him! It's supposed to be from Santa!). Anyway, me being me, before I picked that up, I spent about two hours wandering the toy store, looking at, well, everything.

Star Wars stuff is still ridiculously omnipresent. Both Transformers and, in particular, G.I. Joe seemed to be on the wane. There was a bit of superhero stuff, but Guardians of the Galaxy toys accounted for the vast majority of it. And there was a surprising amount of Teenage Mutant Ninja Turtles toys there, I suppose the Nickelodeon cartoon and the live action movie made for multiple reasons to stock toy store shelves with Turtles toys (although most of them seemed associated with the cartoon, not the film).

They are basically exactly what they sound like, toys based on the Turtles as they appeared in the original comic book, rather than in any of the cartoons or movies that followed, each with a red headband, no distinguishing initial on their belts and so on. 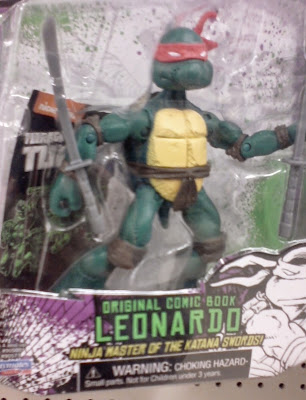 You probably can't see all that well in this shoddy cellphone image, but there appears to be some scoring on them too, as if to suggest cross-hatching.

It's a pretty neat idea. Sure, it might have been neater if they were black-and-white, but whatever; I would have been fascinated with these in junior high, and would have wanted to buy 'em in high school (If you look at the art on the packaging, that appears to be a Peter Laird penciled image of a ninja turtle, or someone drawing in Laird's style.

They came sold in two different ways. You could get just the figure for something like $7 or $8, I think, or you could get the figures packaged with a comic book for $14. The comics are the one-shot "micro-series" featuring each Turtle, from the original Mirage run, although these seem to be the IDW reprints of the same...in fact, you can see the IDW logo on the covers (Huh, I wonder if they're colorized or in the original black-and-white...?).

I imagine those comics, should they fall into the hands of children, would have the potential to blow some young minds. The Michaelangelo and Donatello ones are innocent enough. The 1985 former is called "The Christmas Aliens," and features Mikey busting some criminals who have hijacked a truckload of that year's must-have Christmas toy, the 1986 latter is Kevin Eastman and Peter Laird's most direct Jack Kirby tribute, as Don meets a cartoonist named "Kirby" who has a magical crystal that allows whatever he draws to come to life (these are mostly crazy, Kirby-esque mechanical/organic creatures).

But the Raphael and Leonardo issues are pretty hardcore. The former, also from 1985, begins with a scene in which Raphael loses his temper so badly with Michaelangelo while sparring that he nearly murders him with a wrench and then, when going out to cool off, he meets insane vigilante Casey Jones, and the pair bond by beating the hell out of each other. 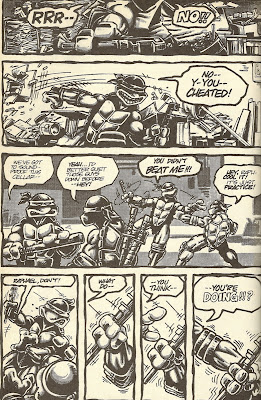 The latter, from 1986, is one of the most visually accomplished, dramatic and action-packed issues of the original run. Entitled "What Goes Around...Comes Around," it's the only one of the four that has more folks credited than just Eastman, Laird and letterer Steve Lavigne. [Stephen] Bissettem, [Michael] Dooney, [Jim] Lawson and [Ryan] Brown are also credited, although it's hard to tell who did what, as is so often the case with early Mirage comics.

The narrative is split into two, with one strand featuring Leonardo out in the snow alone, fighting and killing his way through a gauntlet of Foot ninjas and the other featuring April and the other three turtles at home in her apartment, decorating the tree and beginning to celebrate Christmas. The fight scenes are much more textured and inked and shaded, while the celebration scenes are brighter and whiter and slightly less detailed (If I had to guess, I'd guess Lawson penciled the celebration scenes and either Brown and/or Eastman finished them, while the Leonardo scenes look like everyone might have had a hand in them).

Anyway, it's about 30 straight pages of ninja fighting, ending with a bloodied and beaten Leonardo being thrown through the apartment window in a three-panel, slow-motion sequence—"KER- RASS- SHHH!"—and laying on the floor gasping... 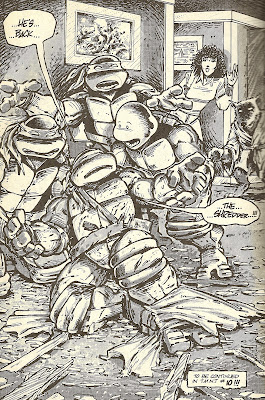 Kind of a down note to end on, huh? Oh, and good luck finding  an issue of the 28-year-old "T.M.N.T. #10!!!" kids! (If you do manage to track it down in an IDW reprint or collection of some kind,  it's, like, the ultimate low point in TMNT history. That's another issue-long fight, in which The Shredder and The Foot Clan break into April's apartment, beat the shit out of everyone and burn the place to the ground, with only the timely intervention of Casey Jones allowing our heroes to flee to safety in Northampton, where they will remain in hiding from their enemies for 12 issues or so. At that point the Turtles return to New York to kill a bunch of Foot ninja and re-kill The Shredder.)

I looked on the back of the box to see if these four figures were part of a whole line of toys based on the original comics—I'd love toys of Dave Sim's Cerebus, Renet and Savanti Romero or the Turtles with their pre-teen variant weapons from #9!—but no dice.

Still, it's nice to see toys so closely based on the original designs out there for mass consumption and, especially, mid-1980s, independent comics attached to many of them, primed to blow the minds of any kids who read them and, hopefully, set them upon the path of discovering the original TMNT comics and, through them, the world of comics in general. Eastman and Lairds' Teenage Mutant Ninja Turtles was one of my original gateway comics, and look where I am today!

On second thought, maybe that's not such a good thing...

*Fun fact: Michaelangelo's name was "Michaelangelo" originally because, despite the fact that Splinter named his four sons after favorite Renaissance artists, Eastman and Laird misspelled "Michelangelo," adding an extra "a" where one didn't belong. I know that in in volume 4 of Teenage Mutant Ninja Turtles, the Peter Laird-helmed Mirage series that was published right up until about the time he sold the characters to Nickelodeon, he changed the spelling to "Michelangelo," thus fixing his mistake...and, incidentally, retconning the spelling of the character's name about 20 years too late. I'm honestly not sure how it's typically spelled now in various merchandise and media—I could pull an IDW trade off my bookshelf and do some Internet research if I wanted to know terribly badly, I suppose—but on the toy packaging it's spelled "Michelangelo," the correct spelling of the name of the artist he's named for. But if you notice the cover of the comic book behind the figure, it's spelled as Eastman and Laird originally spelled it, "Michaelangelo."
Posted by Caleb at 8:07 PM