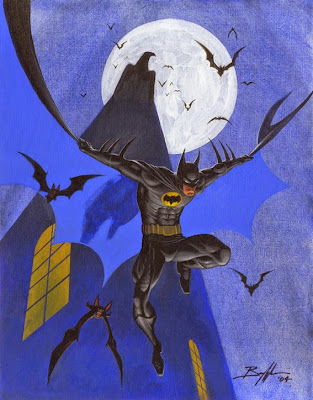 As many of you have likely already heard, longtime Batman artist Norm Breyfogle has recently suffered what sounds like a pretty serious stroke. That can be a pretty terrible thing to suffer, no matter who you are and what you do for a living, and I can only imagine how much more horrible it must be for an artist to lose—even if only temporarily—the ability to use his drawing hand.

While I've never met the man, Breyfogle has been a pretty big part of my life, as I've spent God knows how many hours reading comics he's drawn, and I've even tried teaching myself to draw better by studying and trying to copy his work. Breyfogle is, in my opinion, one of the best Batman artists of all-time (he's maybe a hair ahead of Kelley Jones in my book), and his work on the Batman books with writer Alan Grant in the early '90s made him one of the handful of gateway artists who helped interest me in what ultimately became a lifelong obsession of mine, comics.

Additionally, this is probably a good time to remind any readers of The Hero Initiative, a worthy organization dedicated to providing a financial safety net for comics creators in need. It's never a bad time to consider a donation to The Hero Initiative.
Posted by Caleb at 6:54 PM

Amen! One of the best Bat-artists ever. Ever. Artists need some kind of health care option. Freelancers of any kind need it.