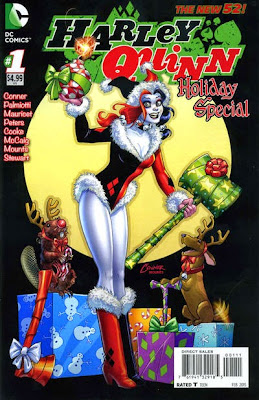 DC sure hasn't been shy about striking while this particular iron is hot. The new Harley Quinn solo series, the character's second, launched in November of last year with a #0 issue featuring one drawn-out fourth-wall breaking gag and drawn by a who's who of artists. It probably shouldn't have been a surprise that that issue was a hit, but, rather remarkably, the issues that followed also sold very well.

Perhaps it was the higher profile the already sorta popular character received thanks to various video games, perhaps it was the presence of cover artist and co-writer Amanda Conner, perhaps it was that the book was in the DC Universe line of books, while striking a very different tone and style than that of the other 51 or so books in "The New 52." Whatever the reason, Harley Quinn was working better than pretty much anything other than Scott Snyder and Greg Capullo on Batman.

And so in the last year DC has published Harley Quinn Invades Comic-Con International and Harley Quinn Annual #1, both with the sam basic different-artist-for-every-scene format as the #0 issue (the annual additional boasting the incentive of being a scratch 'n sniff rub 'n smell comic), and, just this last week, Harley Quinn Holiday Special #1.

It's a 36-page, three-story anthology, featuring two Christmas story and one New Year's story, which is why it's called a Holiday special and not a Christmas special, Kirk Cameron.

All three stories are written by the regular Harley Quinn writing team of Conner and Jimmy Palmiotti, and each drawn by a different artist, each of whom works in a much looser, more distinctive style than regular Harley Quinn artist Chad Hardin (At the rate they're going, I wonder if Harley will be the next DC super-character to get a digital-first anthology series following Wonder Woman, Superman and Batman).

The first of these, entitled "Bad Toy," is the longest, and at 19 pages is essentially an extra issue of Harley Quinn, albeit with guest art by Mauricet. Harley, who is apparently now a pet hoarder, failed to properly spay or neuter her many pets (Public service announcement: Spay or neuter your pets!), and they've been multiplying like rabbits. She and her friend Tony come up with a brilliant plan to get rid of them: They dress up as "Santa's Helpers" who volunteer to carry packages to the cars of shoppers and, if they think the shoppers will be good pet-owners, they hide a puppy or kitten in one of their bags.

But on Christmas Eve, Harley decides to check on one of them, and ends up getting busted Christmas morning. The cartoonishly bratty little girl of the house thinks Harley herself is the present, and so the girl's father bribes Harley into playing along for a while...but to make herself so undesirable a playmate that the girl gets rid of her of her own volition.

It reads much less complicated in-story. 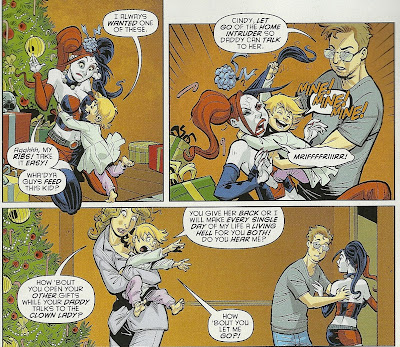 Anyway, Harley eventually solves the family's problems by virtue of being immature, juvenile and a deranged lunatic with a heart of gold. It works surprisingly well as a Christmas story and a Harley Quinn story.

The art is pretty great. Mauricet has a highly kinetic, highly expressive style used to great effect throughout, The characters—human and animal alike—are highly expressive, and Harley is drawn as super-sexualized as usual, but with a good girl, cartoonish edge that bleeds toward parody.

That's followed by a shorter, sillier story entitled "Get Yer Cheer Outta My Ear," in which Conner and Palmiotti introduce us to the humbug, a tiny parasitic insect that embeds itself in the ear of a human host hums Christmas music directly into the brain of its victim. Then they introduce it into Harley.

She is saved by Santa Claus in a way that isn't as dirty as this panel might imply... 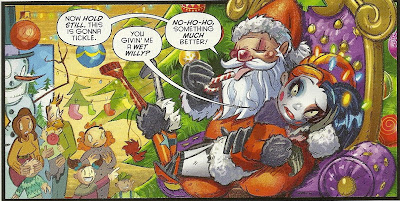 ...who then takes Harley out to dinner at a kosher deli and expresses his thanks to "these great people" for not celebrating Christmas, and thus "making my job easier each year!"

This one is drawn by Brandt Peters, in a painterly, picture book style that reinterprets Harley as a big, bobble-headed doll.

Finally, there's "Killin' Time," drawn by Darwyn Cooke, who is probably the ideal Harley Quinn artist, at least this side of her creator Bruce Timm. Cooke's Harley is Harley as originally conceived and designed for her birthplace, Batman: The Animated Series, although Cooke renders her in her "New 52" look, with the bone-white skin and half-red, half-black hair. He additionally outfits her with a winter version of her costume (In Mauricet's story, she merely wears her regular duds, albeit more skimpy versions, with a jingle-bell collar and short leather jacket; in Peters', she puts a coat and furry boots oon over her roller derby uniform). 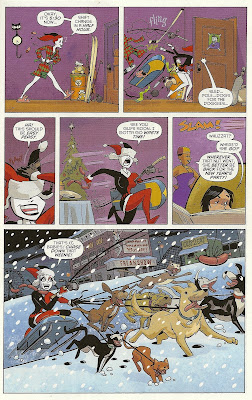 The story here is one of cartoonish insanity, made more cartoonish still by Cooke's suepr-flat, unapologetically 2D artwork (I imagine the jokes in the regular series would sing much better if they were always drawn in such a style). On New Year's Eve, Harley notices that she has a gray hair—not sure how that works, given her New 52 origin—and when her friends tell her about Father Time and the New Year's Baby, she becomes convinced that all she has to do to stop from growing older is track down a Mr. Harold Tyme, an elderly patient of hers in a nearby hospital, and either break his magical time piece and/or murder him.

No one gets murdered, and while Harley doesn't exactly learn a lesson in this one, she does get that gray hair taken care of.

I'm inclined to say that I wish Cooke was drawing Harley Quinn monthly, but then, I'd rather see him work on other, better comics, particularly ones he might be more passionate about. But then, if he's just going to waste his time on things like Before Watchmen projects and vigorously, ignorantly defending them in interviews with industry media outlets, well, he might as well be drawing Harley Quinn comics monthly, you know?

In-between the stories are a pair of Billy Tucci-drawn holiday pin-ups, both needlessly labeled "Pin-Up." The first features New 52 Harley in front of a wreath and dangling mistletoe above her head, the second features the Bombshell version of Harley (save this one has all-white skin) in front of the New Year's Ball.

I'm not really a fan of Palmiotti and Gray's take on the character, which amounts to little more than a sexy Halloween costume version of Marvel's Deadpool, but I enjoyed the looks of all three of these stories, and while some of the previously mentioned Harley comics feature more artists, this one is probably the best preview or gateway comic into what all the Harley Quinn hype is about, as it allows the regular writers to tell short, complete stories, each with talented artists who stick around long enough to make an impression, rather than just drawing a page or three.

Hey, any of you out there regularly Harley Quinn readers? If so, can you identify the...character in the below panel who appears to be a large egg in some kind of robot suit...? 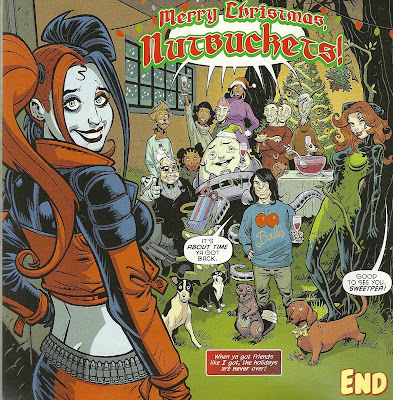 That's not the New 52 version of obscure-ish Wonder Woman villain Egg Fu, who Grant Morrison and company resurrected for the weekly 52 series, as a giant-er egg in a big robot suit, is it...?

Just wondering. I checked out of the Harley Quinn monthly after about two issues, and have only read the specials since then.
Posted by Caleb at 9:21 PM

Yep, that's totally Egg Fu. He showed up as an antagonist in the Annual and ended up moving into the apartment building Harley owns. It's a long story.

I don't know WHY I don't like that--maybe because I liked the scary-ass New 52 version? Or that a Harley comic is a weird place for a Wonder Woman villain?--but I don't like it. I guess I should read that annual now...