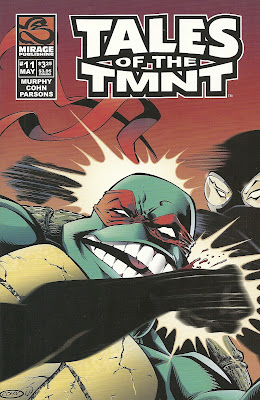 What's that you say? Didn't we leave off on the seventh issue of the second volume of Tales? Yes, yes we did. And what happened to issues #8, #9 and #10? That's simple: I don't have them. When I recently bought all the back-issues of TMNT volume four and Tales volume two that Mirage still had available, there were chunks of each run that were missing and, well, #8-#10 are among those missing chunks. I'm going to proceed with the next issue I have and, if and when I acquire missing ones, I'll cover those then.

This issue has 24 story pages in it, and yet it reads very, very quickly, the pace quickened by the inclusion of two-double-page splashes, neither of which require the space for detail, but use it for emphasis, illustrating the points at which a battle between our heroes and The Foot Clan turn.

It is actually pretty fitting that this issue reads so quickly, given it's subject matter. 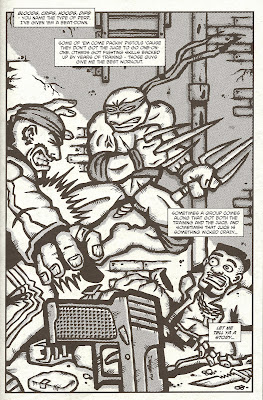 After a frontspiece of Raphael fighting some dudes in which he muses about what his opponents sometimes bring to the fight (a frontspiece featuring rather unusual artwork from Steph Dumais), we meet the trio of Foot mystics that appeared briefly in Tales #2, as they observed a follower trying to defeat Splinter in a battle on the astral plane. Here they have selected three ninja to imbibe a special potion that will grant them special powers with which to attack Splinter and the Turtles, which one of the mystics refers to as "Kami Ninpo Damashii." Divine...ninja art...soul...I think that translates too...? I don't know, blame Steve Murphy. He scripted this issue, from a plot he concocted with Peter Laird and pencil artist and toner Scott Cohn (Inker Sean Parsons rounds out the creative team for this issue).

Whatever the stuff's called, it gives the ninjas blood-shot eyes and super-speed, with which they attack Splinter and The Turtles who, fortunately for the Foot, are just cold strolling around New York City, and are thus susceptible to attack. 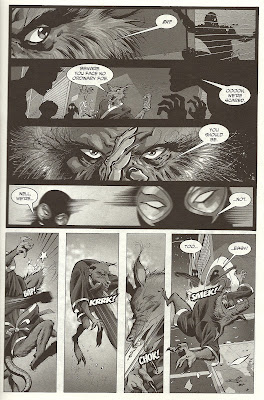 After triple-teaming Splinter and knocking him out cold, the ninja start beating the hell out of the turtles, who move like tortoises in comparison to the Flash-fast ninja. 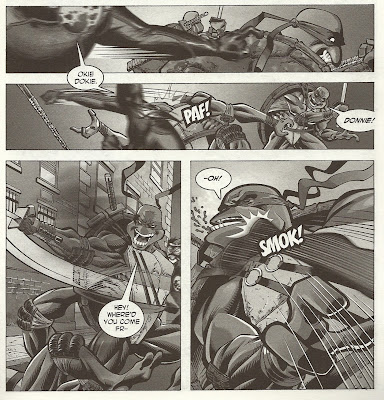 Our heroes would end up as dead meat were it not for a rather lucky break: One of the ninja hits a turtle so hard he sends him flying shell-first into a fire hydrant. The hydrant shatters, and the ninja become temporarily distracted by the sight of the geyser of water, as their sped-up senses allow them to see each and every single drop of water.

Taking advantage of their pause, Splinter picks up one of Leonardo's swords and chops all three of their heads off in a single blow.

The Turtles hobble off to hide, and we check back in one final time with the three mystics, who are now all hot-tubbing together (?). They are being served drinks by the fallen ninja, who are apparently semi-resurrected by having their heads stitched back on and being swathed in bandages.

And that is apparently where the title for the issue, "The Quick and The Dead," comes from. They were quick, and now they're dead.

I'm not a big fan of Cohn's turtle designs here. They are very big and very bulky, absolutely dwarfing their human attackers, who are either children or extremely small, if the usual mutant turtle-to-person size ratio is in effect. Otherwise, Cohn just draws them really big. The shapes of their heads look a little off to me too, with the lower half of their heads being much bigger than the upper-half—which isn't that unusual, really, save that they have very prominent chins. The Turtles usually seem to be either round-headed, or, if they have the more traditional head-shape, they have prominent beak-like lower faces with wider cheeks to accommodate their gritted teeth, and no chins at all.

They remind me quite a bit of Rich Hedden and Tom McWeeney's ninja turtles (from TMNT #34 of the original run; their later issues were pretty cartoony), although Cohn's turtles find themselves in a narrative played completely straight, with no real jokes (save the rather dark one at the end, I suppose).

Cohn and Parsons draw the human characters quite well though (although I was a little puzzled by the fact that one of the three Foot ninja had such a pronounced gut), and I do like their design for Splinter. In addition to looking quite rat-like, he has a rather scraggly look about him; he looks like a giant rat man who spends most of his time in the sewer, you know?

They do a pretty superb job of intimating motion, which is obviously pretty integral to the story. All the story is, really, is a scene in which the Turtles get their asses kicked by super-speed ninjas, and Cohn and Parsons use speedlines and blurring effects, as well as posing, to get over the characters' speed, and how much they outmatch our ninja heroes.
Posted by Caleb at 7:46 PM