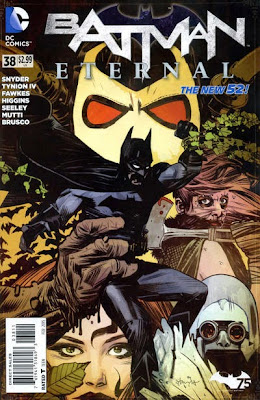 Batman Eternal #38 (DC Comics) Tim Seeley scripts and Andrea Mutti draws this week's issue, in which Catwoman manipulates various parties into taking down the most dangerous escapees from the Arkham Asylum collapse, for the betterment of the city. Batman, who is apparently running out of high-tech weaponry now that the Wayne fortune is off-limits and his various Bat-bunkers have been blowed up, takes on The Joker's Daughter, Mr. Freeze, Clayface and The Scarecrow, while Killer Croc takes down Bane (An unfortunate side-effect of that encounter? Their dialogue reminded me that they just recently fought one another in the really quite terrible Forever Evil: Arkham War, which reminded me that Arkham War existed, and that I read most of it, and that was really a thing I was trying to forget having done).

As a result, Killer Croc gets a new job that I can't imagine he's too happy with (I certainly wouldn't be, if I had to dress like that), we're supposedly supposed to worry about Batman having to fight crime with dwindling explosives and such-like (although he did do okay with just batarangs, bat-rope and his fists for about 50 years didn't he?), and Jim Gordon gets offers of help from two very unlikely sources.

Mutti's art is pretty good. Not the best in the weekly series, but hardly the worst, either; I do wish someone would let Scarecrow start wearing hats again though... 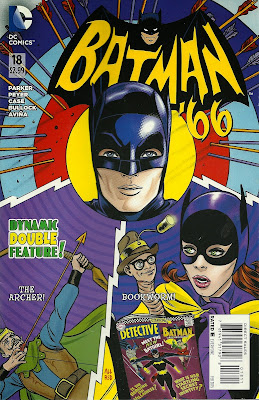 Batman '66 #18 (DC) Two short stories this issue. In the first, the Dynamic Duo take on the dully named villain The Archer, whose new twist on his Robin Hood act is to rob from the police and give to the criminals. This story by writer Tom Peyer features maybe the most ridiculous climax I've ever seen in any comic book ever, but it also features some really great art by Dave Bullock, who I wish drew more superhero comics for DC, and, of course, Batman on a horse, a true sign of quality comic books.

I found the back-up by writter Jeff Parker and artist Richard Case much more appealing, as it was a Batgirl solo story, and pitted Gotham Public Library's Head Librarian Barbara Gordon against book-based criminal mastermind Bookworm. This time he's after a Necronomicon-like tome of ancient and evil magic. When he recites the magic words—all jokes that I confess took me way too long to get, as I tried reading them backwards and unscrambling them like they were anagrams, before realizing they were just phonetic spellings of various Batman '66 in-jokes—he transofrms his beatnik bodyguards into giant, book-eating, monster book-eating silverfish. There are more than enough library-related jokes in this to likely make it a favorite for any readers who work in a library and, personally, that is always something I liked about the original Barbara Gordon/Batgirl, who here even has a cool hideout hidden in the stacks. 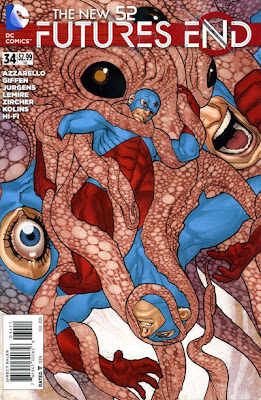 New 52: Futures End (DC) After Ryan Sook's better-than-usual cover for this issue (and the covers are generally pretty good, even the best part of every issues), the artwork perks up a bit during a five-page sequence drawn by Scott Kolins. Unfortunately, this is the least interesting sequence imaginable, as it begins with two-pages of conversation involving Grifter's tech guy, WildStorm's Voodoo, someone named Mercy and a pair of British sisters wearing Union Jacks and calling themselves (sigh) Banger and Mash. It's followed by three pages of Grifter, Lana Lang, Fifty-Sue and others planning a heist...which, if it's anything like the heist The Key, Plastique, Coil and Batman Terry McGinnis planned earlier in the series, could take as many as 15 issues to plan and ultimately have no pay-off.

The rest of the book is drawn by Patrick Zircher, and is more visually interesting, even if it's all just fighting and prepping to fight: The new Firestorm vs. The new Dr. Polaris, the new Stormwatch vs. the old SHADE, Batman 2019 spying on Batman 2049 and The Joker/Batman hybrid-bot from 2049 traveling back to 2019 to attack Plastique. 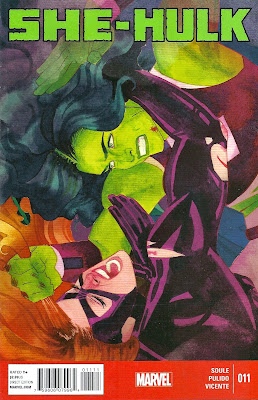 She-Hulk #11 (Marvel Entertainment) It's 18 pages of fighting between two splash pages of not-fighting, as writer Charles Soule and "storyteller" Javier Pulido (Yes, that's how he's credited) have She-Hulk and Titania duke it out, with Volcana, Hellcat, Angie and Hei Hei eventually joining in.

There's some really quite spectacular art in this issue, and Pulido really gets to show off how good he is at drawing action in interesting, fun and even innovative ways. Things are definitely winding down in this title, which, after all, has already been announced as canceled, and I definitely got the sense that Soule was forced to reveal some things about Angie and Hei Hei a lot sooner than he planned to based on having fewer issues than he might have originally planned when he started writing the book as an ongoing monthly series.
Posted by Caleb at 3:23 PM