On The Little World of Liz Climo 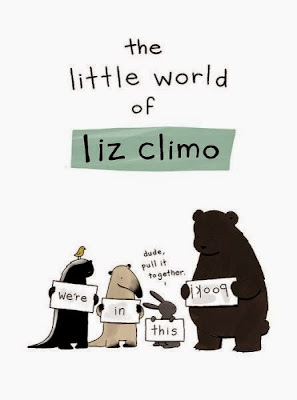 Are you all already familiar with the work of Liz Climo? If not, she draws rather funny comics featuring cute animals engaged in conversation and/or more elaborate social situations, delivering jokes in a very effective, deadpan manner. Many of the jokes are basic ones derived from the species of the animal in question.

If you are not familiar with Liz Climo, you can familiarize yourself with her work quite quickly. You can read her comics on the Internet. Or you can read her new-ish book, a collection of 148 of her cartoons. That's the cover of her book up there.

When I checked it out from the library, I had every intention of writing a review of it, but I'm finding it somewhat challenging to do, particularly because Climo's comics are so short, sweet and simple that it's difficult to discuss any of them without ruining them, and it's far easier to simply point at examples and say, "Look at this comic" then to "review" them. I mean, if you read one, you'll get it; that's how universal most of the humor is.

So instead, I just thought I'd post scans of a few examples, none of which are among the better ones in the collection (that third one's not funny at all, really), but all of which feature jokes referencing comic book characters. 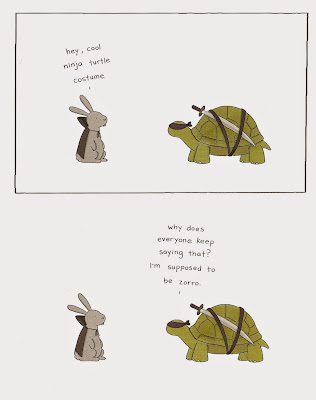 I really like the way Climo draws animals. They're not quite realistic, but they're not exactly cartoonish or exaggerated either; they look like super-stripped down drawings of real animals drawn from life. Except for when they're doing extremely human things, which is often.

I also like that she chooses interesting animals to draw. Not just the ones you see on the cover, but also, in one instance, a capybara. I think capybara's are inherently funny, and the choice of a capybara is kind of funny because it appears in a strip that has no reason to have a capybara in it. It could literally be any other animal at all, as the joke in that strip is being generated by the presence of a badger.

I like the way she draws their eyes as little dots, too. You can't get much more deadpan than having no expression or animation at all...not even a pupil. It also helps them look like normal dumb animals, which makes it funnier still when they evince complex human emotions or reactions. 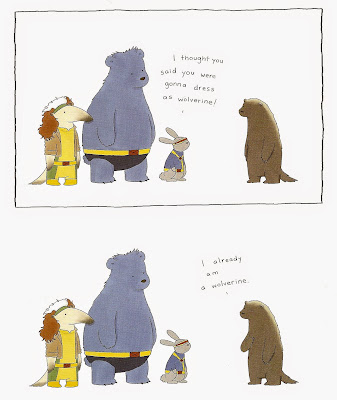 There are a few of the strips that suggest the work of Gary Larson on The Far Side (I'm thinking the one with the bear rug, for example, or the one where the beaver with a fake duckbill tied around his face tells a playtpus"I have something to tell you," or the one where a hamster puts his arm around a smaller hamster while surveying the running wheel and water bottle and says, "Someday this will all be yours."

They are actually few and far between though. Climo favors a one-two punch, leading up to the gag, whereas Larson's gags were immediate, as he worked in single panels. Climo's sense of humor, in aggregate, seems much different as well; more observational comedy with animals.

Most of the characters in most of the strips are animals, but not all of them. One has mummies in it. Another little green Martians. Many of them have two green, bipedal lizards that look like super-cute Godzillas, although the little one refers to itself as a dinosaur in one strip, and plays Godzilla in another. I think they're supposed to be dinosaurs, based on the fact that Climo has an upcoming children's book featuring the characters on the cover and it's entitled Rory The Dinosaur: Me and My Dad. 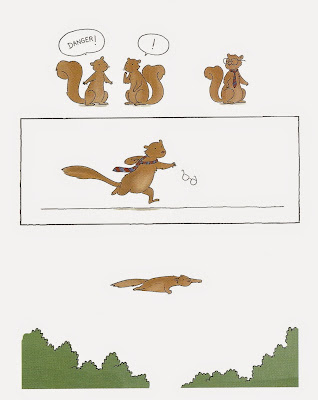 I like the way she pairs a few of the characters, as well. The bear and the rabbit share all of their strips together, for example, and gradually they form a sort of comedy team, some gags coming from their relationship or their personalities as much as from some aspect of their species.

Anyway, online or in print, Liz Climos's comics are worth seeking out. She draws good, and she tells funny jokes.
Posted by Caleb at 6:36 PM