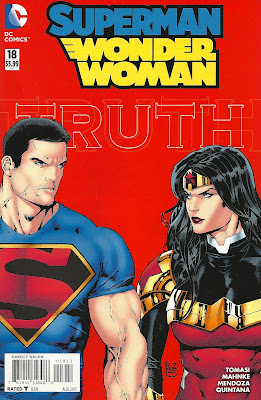 Superman/Wonder Woman #18 marked the first issue of series in DC's post-Convergence universe, in which the pair of heroes each have drastically different new directions in their ongoing titles.

In the case of Superman, he was publicly outted as Clark Kent, he got a new haircut, he traded in his old costume for t-shirts so tight they might be body paint (if Paulo Sigueira's cover to the issue is anything to go by) and he was vastly (if ambiguously and mysteriously) depowered.

In the case of Wonder Woman, she got a new outfit.

This first story arc is called "Dark Truth," and it is written by Peter Tomasi and drawn by pencil artist Doug Mahnke and a bunch of inkers (four of 'em in issue #18, but just one in #19). In part one, we find Wonder Woman in Superman's bed, wearing his Superman t-shirt (which fits her like a dress), stroking her sleeping Man of Steel and reminiscing about their relationship thus far.

Awoken at 3 a.m. by a phone call from Lana Lang that gets cut off suddenly, the characters suit up and fly to Smallville to investigate. 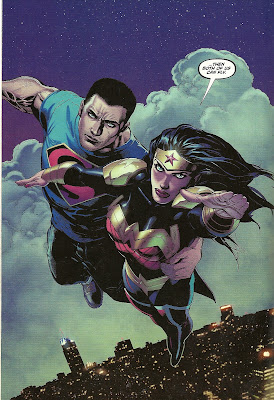 The goings-on there are rather strange; not only is Lana Lang and New 52 Steel missing, but someone has somehow stolen The Kent Family home and barn, and seemingly emptied all of the graves in the graveyard.

A furious Superman calls out whoever is doing this, and a blast of machine gun fire heralds the appearance of The Suicide Squad, who Mahnke draws over a two-page splash, so I'll only show the right half. 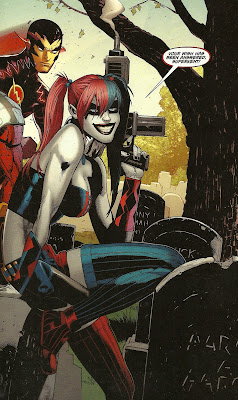 This is the first time I've ever seen The New 52-icide Squad drawn well, before. Deadshot's costume still looks terrible, but it's the least terrible I've ever seen it look, and at least as Mahnke and whichever of the four inkers inked this page draw it,it's clear that it's made out of some sort of red metal.

Superman and Wonder Woman give them dirty looks on the last page–another splash!–and Superman uses the H-word. 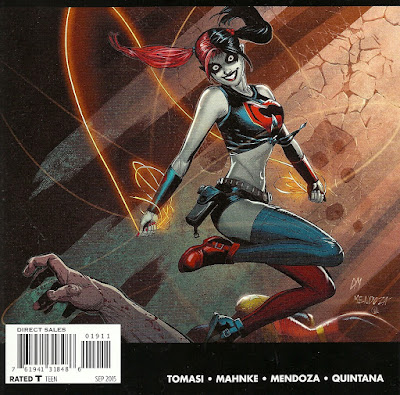 The cover of the next issue, the one actually containing the fight, seems to indicate a victory for the Squad, or at least Harley Quinn. Could it really go down that way though? I mean, this particular Squad consists of Harley, Deadshot, Captain Boomerang, Black Manta and The (a?) Reverse Flash; a fully-powered Superman should be able to take them all out by clapping his hands or blowing at them. He's not fully-powered, of course, but he is hanging with Wonder Woman. She should be able to level them all in a panel, with only Reverse Flash maybe causing her some trouble.

The fight actually lasts 8-10 pages, although two of those pages are devoted to a two-page splash showing the two opposing sides rushing at one another.

I am immediately unimpressed with supposed master marksman Deadshot, who has three shots of his blocked by Wonder Woman's bracelet, and the ones she doesn't block just bounce harmlessly off of her new shoulder pad (I guess it's a good thing she just started wearing shoulder pads!). 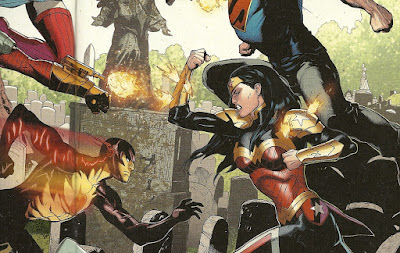 Actually, I'm also unimpressed by Wonder Woman. She only blocked three out of five of the shots fired at her in that panel. That's just 60%. I thought she was supposed to be the best on Paradise Island when it came to bullets and bracelets!

Wonder Woman quickly redeems herself by breaking a tombstone over Deadshot's head (ow!), kicking Reverse Flash in the face (even if he didland a few punches before she did) and then clobbering Reverse Flash with Captain Boomerang, who she is swinging around by his stupid scarf (Who wears a knit cap, scarf and overcoat in Kansas in July, anyway?) and, finally, pulling Harley off of Superman and punching her silly. 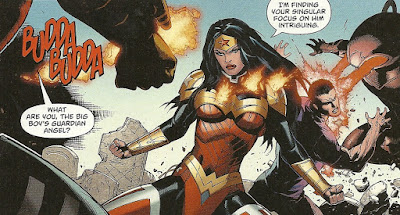 After the Justice League's power couple finishes beating up the Suicide Squad, they talk about getting some information from them. Naturally, Superman decides the best way to do this would be to threaten Black Manta: 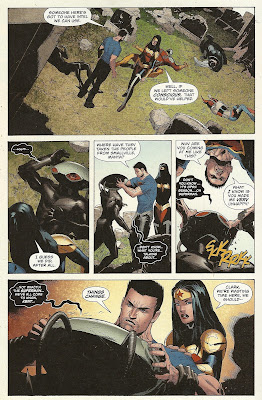 Oh, if only they had some kind of, I don't know, magical device like, say, a rope, that they could use to compel someone to give them information that they want.

She still has her magic lasso of truth, but she uses it mostly for entangling and strangling people.

But before either of our heroes can remember that Wonder Woman carries a magical polygraph device with her at all times, Deadshot wakes up and starts shooting wildly at them. 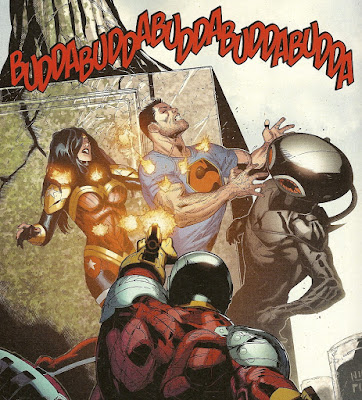 He is so bad at shooting: 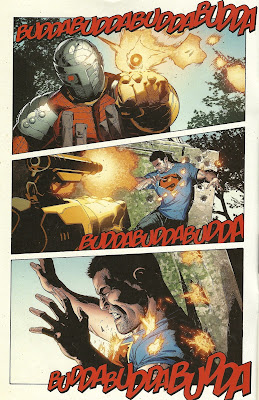 I mean, he hits Superman a lot, but not, like, in the eye or mouth or forehead, and not in the same place repeatedly, just sort of all over the place. He brags about his "homemade high-velocity armor-piercing shells," but they don't actually seem to do too much damage to Superman, seemingly afflicting him the way a bunch of bees might affect you or I–they hurt him, they stagger him, but they don't grievously wound them, or even tear his shirt.

Wonder Woman than throws Deadshot into a tree, grabs Superman, and files away with him, leaving the Smallville cemetery littered with unconscious super-villains.

I guess Superman is weaker, but still bulletproof...?

Anyway, this is a very well-drawn pair of issues, but I'll be damned if I can make heads-or-tails of what's going on with the Superman franchise at the moment. I wish they would have let "Truth" play out in Superman and Action before we started seeing this new, weakened Superman showing up in Batman/Superman, Martian Manhunter and this title (and maybe some other places I haven't noticed), as it's not really clear what his deal is yet.
Posted by Caleb at 8:43 PM

I wonder if Wonder Woman failing to block the bullets and Deadshot failing to hit was a result of Tomasi trying to portray their abilities partly cancelling each other out. Deadshot's super-aiming powers stop WW from blocking every shot, WW's blocking ability stops every shot from hitting. The still doesn't explain why one shot hit her shoulder, unless it was aimed for somewhere else before she moved to block.

I imagine Deadshot wouldn't even bother trying to aim at Superman's vitals, since he knows the bullets won't penetrate, so that might explain that. He'd shoot to disorient, not kill.