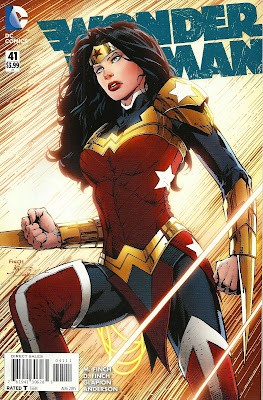 In addition to launching all of those new titles as part of their "DC You" publishing initiative, DC also attempted to make the June issues all of their pre-existing titles good jumping-on points, by starting new story arcs and launching new directions for the titles. In the case of the bigger characters, those new directions were rather radical.

Superman's secret identity was revealed to the world, he was greatly de-powered, he got a haircut and started wearing a more casual costume of jeans and a Superman t-shirt again. Batman is presumed dead, and so former police commissioner James Gordon is taking over the role of Batman, wearing a huge suit of robotic armor. Even Aquaman and Green Lantern Hal Jordan received pretty dramatic new costume changes and shifts to their status quo (with both being labeled fugitives).

And as for Wonder Woman? Well, she basically just changed clothes.

June's issue of Wonder Woman, which is still being written by Meredith Finch and still being penciled by David Finch, includes a scene where Wonder Woman visits her half-brother Smith/Hephaestus to pick up her new outfit. It's mean to be a reflction of everything she is now, she says, "god, queen, warrior for justice." 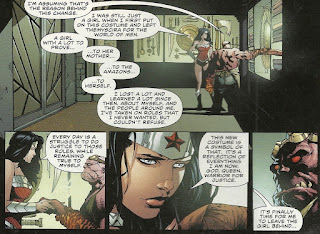 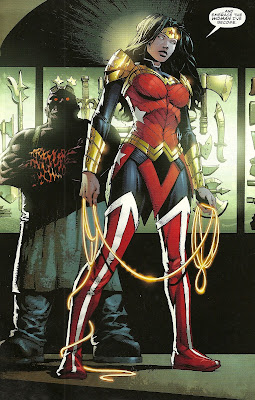 I suppose some in-story rationale was needed, but it's not really apparent from looking at the costume how it reflects any of that, and does so better than her "old" costume (which is only about four years old at this point). Well, the bigger, pointier wristbands and shoulder armor perhaps suggests "warrior" in a way her old costume didn't. And maybe replacing all of the silver bits with gold is meant to denote a promotion from princess to queen, and from demi-god to god...? She already wore a tiara at all times, which already suggested royalty.

In the back of the $3.99, 20-page Wonder Woman #41, there's a two-page feature labeled "Warrior Wear" which features a half-dozen preliminary sketches–including one which looks an awful lot like a Donna Troy/Wonder Girl costume, and another that looks like the final version with a cape attached–and a sheet of the final costume from three different views.

There's a block quote from Finch, and six short paragraphs about the design process. 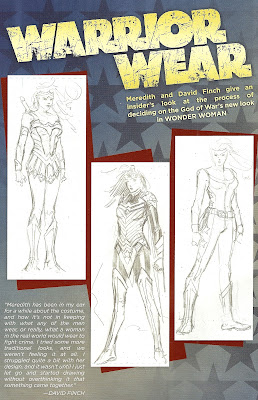 "Meredith has been in my ear for a while about the costume, and how it's not in keeping with what any of the men wear, or really, what a woman in the real world would wear to fight crime," he says.

Meredith Finch is quoted saying basically what Wonder Woman does in the script: I really wanted her new costume to reflect all of her roles: old–as in, member of the Justice League; and new–as in, God of War and Queen of Themyscira."

By "what any of the men wear," I assume Finch was referring to what the other Justice Leaguers wear, and that, of course, means showing less skin. In that regard, pants are usually what gets added whenever someone tries to improve upon Wonder Woman's costume (in fact, New 52 Wonder Woman was going to wear pants instead of shorts, until fandom collectively freaked out). Covering her bare arms as well is a more unusual move (Jim Lee's infamous pre-Flashpoint redesign included a jacket though). Interestingly, "the men" are showing a bit more skin now than they did when they last had makeovers: Superman's wearing short-sleeves, and Aquaman's wearing no sleeves.

I always find it a little silly when someone tries to articulate practicality and what a superhero costume should look like in "the real world," especially for a fantastic character like Wonder Woman. Like, what would "a woman in the real world" wear to fight crime? A police uniform. And...that's about the only option, really.

I don't care for the costume at all. It's a worse one than the original New 52 redesign (which was just her New 52 costume, but with black pants instead of shorts) and Jim Lee's redesign from J. Michael Stracynski's ill-fated run on Wonder Woman. It's basically just her current costume worn over a black unitard, with a pointy loincloth and shoulder-pads and thigh-high boots. As for how her knife-bracelets work, she doesn't use them at all in this issue, but I've never really understood outfitting Wonder Woman with edged weapons. A "warrior for peace" doesn't really need anything to stab with, you know?

Ideally, Wonder Woman would just change clothes when she was fulfilling the different roles in her life: Wearing her superhero costume when being a superhero, adding Bronze Age accessories like bits of armor and a battle-skirt when being an Amazonian warrior, putting on a nice clean toga when being a queen, and putting on War/Ares' helm and cape when god of warring. It's not like anyone has one outfit they wear in all occasions, designed to reflect every aspect of themselves, you know?

But then, this costume change is really just a change for change's sake, something to give Wonder Woman a hook to potentially draw in new readers, and it shouldn't last all that long.
Posted by Caleb at 8:37 PM

That is the most hideous costume that they have ever come up with for Wonder Woman. The best of course, is Darwyn Cook's.

She is just...randomly wearing anything she can find. None of it is cohesive, none of it is attractive, and I don't see how it is very practical either. Granted, I'm not a huge fan of women fighting crime in bathing suits, but she's Wonder Woman! The outfit she wore in Kingdom Come would also work beautifully, but this is a mish-mash of old elements, and is just a mess.

What is it with loincloths lately. Hawkeye finally stops wearing one any everybody else breaks theirs out...

In adding arm/leg covering to Wonder Woman, I would have gone for – for lack of a better term – "the Aquaman option) and used gold or silver scale or chain in lieu of that black. Arthur's use of such material always stemmed from the same roots as Diana, so it would work, and I think that the appearance (the under-armoring working off of her chest/shoulder-plates and bracers) would fit nicely. You'd even have a built-in "battle-damage" tracker, as you could tear off costuming above it and reveal chain underneath (as Walt SImonson used to do with Thor; in fact I'm probably mentally just trying to make Wonder Woman into Simonson's Thor!) or even show that a foe is "real serious business" by having him'her actually break some links of Smith's chain...

This costume is not for me. The new 52 in general seems to not understand that there are diminishing returns when you add accessories to costumes, but Diana's new outfit takes the cake. It is like Hephaestus just found whatever extra costume bits he had lying around and stuck them on the outfit. I am a bit surprised she doesn't have a 'head cowl', a cape, and leg pouches as well!

While I understand Meredith Finch's point that Diana probably shouldn't be fighting crime in a bathing suit in 2015, a less complex costume that covered more then the old one, maybe a variant on the original pants wearing Jim Lee redesign, probably would have been the way to go.

By "realistic" I assume the powers that be at DC mean "What can we get an actress to agree to wear in the eventual live action movie" since movie casting and marketing seems to be playing a bigger role than ever at DC these days...but yeah, that costume is hideous.

I like the idea of Wonder Woman having different outfits for different purposes. And since she's a magical character, she could get some kind of mystic device that would allow her to instantly switch costumes in the middle of an action scene, like she was a Power Rangers. It's very toyetic, but it's a natural development from the character's background.

And since she's a magical character, she could get some kind of mystic device that would allow her to instantly switch costumes in the middle of an action scene

That's basically what she does in Josh Elder and Jamal Igle's story from Sensation Comics #11. She's on her way from the battlefield to the negotiating table, and to change out of her fighting outfit (basically her costume with a shield, gloves and a battle-skirt), she spins around, there's a flash of light, and TA-DA! She's wearing a nice, clean toga.

"Nice trick," Steve Trevor says, and she replies, " A boon from Aphrodite." So basically like Lynda Carter changing on the TV show, only she can change into various outfits, rather than just from Diana Prince to Wonder Woman and back.