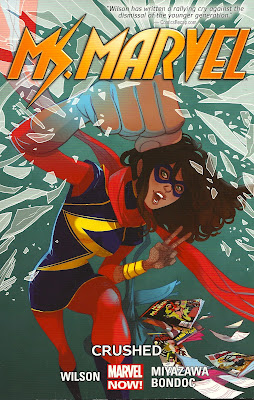 The third collected volume of Ms. Marvel, sub-titled Crushed, is the last collection before Secret Wars rears its Secret Wars-y head in Jersey City, sweeping Kamala Khan up in the (completely temporary) end of the Marvel Universe. The collection has three complete and distinct stories, each with a different artist and, most surprising of all, one of those three is not written by Kamala's co-creator and writer G. Willow Wilson (I think marking the first non-Wilson scripted appearance of Ms. Marvel), and is from a book other than Ms. Marvel.

All three stories are very good, however, which, in the case of the third, is actually quite a relief.

The first story is a done-in-one from Ms. Marvel #12, and features a somewhat forced appearance by Loki, currently in his Agent of Asgard appearance (handsome young man with smaller-than-usual horns on a...tiara, I guess...?) and status quo. He's sent to Jersey City on a flimsy mission to investigate the recent dangers there. He immediately meets Bruno and tries to help Bruno win Kamala's heart, and then crashes their school's Valentine's Dance.

Ms. Marvel and Loki don't exactly fight and team up; they sort of argue and then go their separate ways.

Elmo Bondoc draws this issue, and while the art is in sharp contrast to that in the rest of the book, it's within the same aesthetic ballpark of original artist Adrian Alphona, and is actually really quite sharp.

Wilson's script is as fun and funny as usual, including the way that everyone but Kamala seems to know Bruno is pining for her, and everyone but Bruno knows he'll never win her heart. There's a running gang about how no one even flinches at the site of Loki either, assuming that "viking" is just a new, hipster style that will be catching on soon (I guess that works if Loki has the appearance of a twenty-something now).

Wilson did pass up a perfectly good opportunity for a Mean Girls allusion, however, when Ms. Marvel smashes through the skylight in her school's gymnasium, points at Loki, and shouts, "Everybody stop! This guy is not in high school!"

Surely "He doesn't even go here!" would work just as well, right?

The second story is the three-issue arc from which the collection takes its title, which ran from #13-#15, and is illustrated by the always excellent, always welcome Takeshi Miyazawa. It's an awfully Inhumans-y story, and I'm not crazy about Ms. Marvel's connections to The Inhumans–her name alone saddles the character with a little too much Marvel Universe baggage, making her one of the dozen or so Marvl Comics Marvel characters, so to also link her origin to the new conception of The Inhumans and to keep referencing it doesn't seem terribly smart to me.

It's a very fun story though, even if, by it's climax, I found myself wondering if I should know who this "Lineage" character is and what became of Queen Medusa and Lockjaw in New Attilan. Kamala's parents want to introduce her to their friends son, and while she dreads it, wouldn't you know he turns out to be super-cute and to have so much in common with her that it's practically love at first sight?

It turns out he may have too much in common with her, however, as he reveals that he too is an Inhuman, after Kamala fights a young, bad guy Inhuman about her own age by the name of "Kaboom."

It's a short, swift arc, and there's a lot of fun teen drama in there, including the continuation of the Bruno-love-Kamala plot, and some business with Kamala's older brother. Her almost-boyfriend showing his true colors happens pretty quickly, and I wonder if the arc might not have been more dramatically satisfying if Wilson kept us guessing about him longer, but then, chances are she didn't have time. Secret Wars was looming, after all.

This is pretty awesome:

The final story in this collection is an issue of SHIELD featuring Ms. Marvel, written by Mark Waid (who will be writing Ms. Marvel regularly in the post-Secret Wars Avengers title) and drawn by Humberto Ramos and VIctor Olazaba.

It seems somewhat unusual to include an issue of something other than Ms. Marvel in a trade collection of the Ms. Marvel series, but I think it's a testament to how popular a character she is (readers who read her will want to read all of her appearances), and how relatively young/new she is (there aren't that many appearances of her outside her own book yet; her Amazing Spider-Man appearances are solicited to appear in Ms. Marvel #4.

In this issue, two of the SHIELD agents from the TV show, Agents Coulson and Simmons, are trying to track down a high school student dealing in old super-villain gear. And wouldn't you know the high school he attends is Kamala Khan's? Despite Coulson's continual attempts to keep her from helping out, Simmons sees something of herself in Kamala, and Ms. Marvel naturally forces the issue, helping them whether they like it or not.

Waid handles Kamala particularly, even surprisingly well, but perhaps it shouldn't be too big a surprise. One of Kamala's more endearing character traits is the extreme fannish-ness she harbors towards the superheroes of the Marvel Universe. It's a trait Waid accentuates in this issue, and certainly an old-time, old-school fan with an encyclopedic knowledge of Marvel (and DC) superhero trivia like Waid can easily relate too. It bodes well for her time in the Waid-written Avengers book.

Pencil artist Ramos offers one of the more far afield depictions of the new Ms. Marvel to date, but he is and pretty much always has been a consummate artist of teenage super-people, and he naturally does a fine job on the art for this issue as well.

Is that SHIELD appearance from before or after her cute two-part team-up in AMAZING SPIDER-MAN, where she's more interested in gushing over Peter's past dating experience with Carol than helping fight Kree terrorists?

The SHIELD issue came after her appearance in Spider-Man.