Wait, did I say "Comics," plural? I meant "Comic," singular. Yes, tragedy has befallen my local comic shop this week, as the vast majority of their shipment did not arrive, and will not arrive until next week, meaning there was only a single new comic awaiting me at the shop.

I don't know why exactly this depressed me so, as I was missing just three comics (Batgirl, Scooby-Doo Team-Up and the latest issue of All-Star Section Eight, which was on re-order for me), and it's not like me "To Read" piles haven't grown to precarious, potentially dangerous heights, meaning I do have thousands of pages of quality comics I haven't read yet sitting here waiting for me.
There's just something uniquely disappointing about showing up on the comic shop on a Wednesday afternoon, expecting new comics, and not finding them, I suppose.

Luckily, the one comic on my pull-list that did arrive was fantastic. 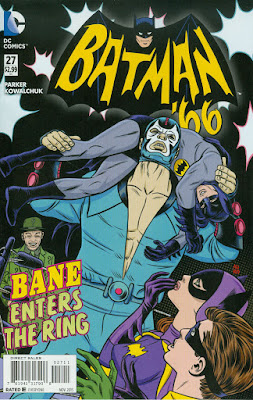 Batman '66 #27 (DC Comics) Regular writer Jeff Parker and the Batman '66 team have filled out the rogues gallery of the original TV show by transplanting villains from the comics that never appeared and '66-icizing them. Killer Croc, Harley Quinn, Solomon Grundy, Clayface and Poison Ivy have made the trip so far, and now they're joined by Bane.

So, how do you make the luchadore-inspired 1990s archvillain into an era appropriate character? Why you make him an actual luchadore, of course.

In what reads a lot like a comic book created specifically for Chris Sims, Parker and artist Scott Kowalchuk have Batgirl and The Dynamic Duo follow a clue of The Riddler's regarding a plan to steal a ring to pro wrestling match. There, Gotham's champion The Hangman (another villain import, whose name is at least shared with the mystery killer in Batman: Dark Victory) is set to face off against Bane, who enters with his original running crew of Zombie, Bird and Trogg, all similarly decked out in luchadore masks. 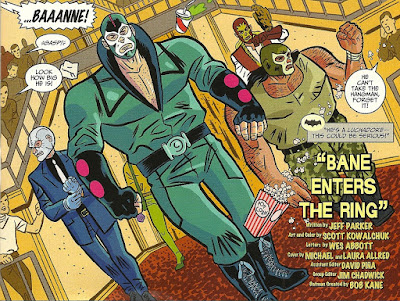 (I never understood why those guys basically just disappeared after "Knightfall;" sure none of them were the mnost compelling of villains or anything, but giving Bane lieutenants made him seem like more of a leader type, and more of a Batman-like character).
Band, "The Bruiser From Below The Border," takes on Batman, and takes him down with his signature move (In one of my favorite gags, The Riddler declares that Batman can't prevail against a legitimate fighter like a pro wrestler, which the narrator also shouts about...apparently not only is wrestling not fake, it's the ultimate form of martial combat!).

Bane and his team return to the Mexican city of El Ciudad Del Craneo, seemingly victorious, but our stalwart crimefighters follow. There are a bunch of little in-gags in this book, and they come at a fast and steady clip. There's a tiny cameo by Dr. Alchemy '66 (look close!), Bane's distinctive Dark Knight Returns mask thingee, Mil Mascaras and El Santo and, in the perfect final panel, the definition of lucha libre.

The most inspired gag is probably that on the first pages, though, in which the Frank Gorshin version of Riddler is apparently wearing a John Astin mask as a disguise, although the one that made me laugh the most is the transition from the last panel on page 12 and the first panel on page 13, which I won't spoil.

I don't know for certain this was the best issue of Batman '66 so far, but it's certainly the best I can think of at the moment. It rewards one's knowledge of the TV series and the comics without ever actually mandating it, and is built around the same strange juxtaposition that made the show such a hit back in the day...and still funny in a lot of ways today. This story, like the show in general, gets a ton of mileage out simply putting its fantastical characters (and a few one-trait character actors) in mundane or otherwise inappropriate situations, and then acting like it's no big deal.

I'm sort of sorry to hear that DC's apparently canceling the ongoing Batman '66 after December's issue. But perhaps they can replace it on the schedule with a Bane '66 series by Parker and Kowalchuk...?
Posted by Caleb at 12:57 AM

Ugh. I feel for your LCS.

This was indeed the pick of the week. There wasn't a whole lot out there.