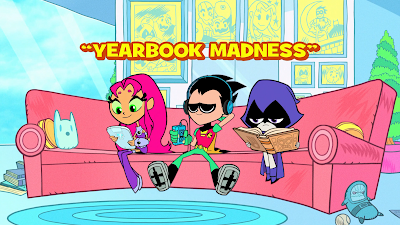 Teen Titans Go! is often jam-packed with allusions and in-jokes to the wider DC Universe, far beyond the cast of characters that regularly appear or cameo in the series. The episode "Yearbook Madness" from season two, however, features an insane amount of allusions and in-jokes–so many that they are impossible to even take in, unless you, I don't know, are watching it on DVD and decide to pause a few seconds from the climax frame by frame and thoroughly study every centimeter of the screen.

In this particular episode of the show, Cyborg and Beast Boy decide to make yearbooks for the Teen Titans, which brings out Robin's hyper-competitive side, and he attempts to win the yearbook by appearing in the most photos. When the books finally arrive, he finds that he has failed, appearing only in a single photo on a single page–that's gotta be particularly devastating when the whole "class" consists of only five people.

Trying to snatch a victory from the jaws of defeat, he goes off to try and collect more signatures in his yearbook than any of the other Titans, and after cajoling and beating various characters into signing his yearbook, he returns only to find the other Titans have filled their books with signatures.

It is this that leads to the greatest two seconds in DC animation history, as dozens of DC heroes and villains–even two characters from Watchmen–appear to have signed Starfire and Raven's yearbooks.

And these images flash on the screen in rapid succession: 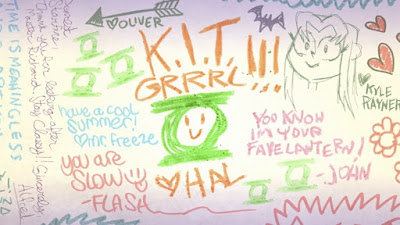 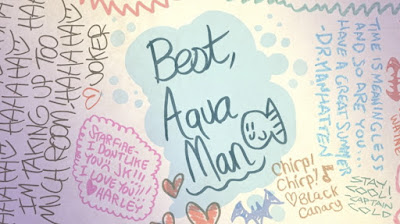 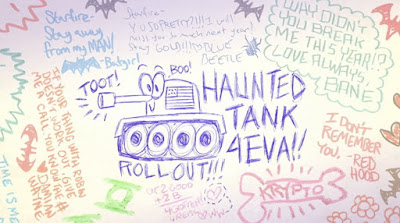 And then when I went back to look for clues, I saw the glory of those three images: Starfire getting signatures from all three GLs (I love Hal's smiley face ring, and the fact that Kyle included a sketch of Star with his), Alfred's classy signature, Batgirl and Damian involving themselves in the non-existent Robin/Starfire romance and so on.

The crazies bit by far, however, was the one to the right of Aquaman's signature: "Time is meaningless and so are you...Have a great summer. –Dr. Manhatten." Okay, sure, the name may be spelled wrong, but clearly that's meant to be Dr. Manhattan, making this the first crossover between Watchmen and any version of the DC Universe in pretty much forever, right? And on Teen Titans Go! of all places!

Being so thoroughly defeated in the signature-gathering as well naturally only drives Robin further into Yearbook Madness, to the point that he asks Raven to use her magic to literally transport him inside the yearbook. When she refuses, he asks to sign her book instead, and have her read what he wrote. She does, and it turns out to be her all-purpose magic words, "Azarath Metrion Zinthos."

And so Robin is teleported within the pages of the yearbook, where he runs around joyfully. At the climax, he appears as an animated sketch on her "Autographs" page, and we get to see more DC character signatures. Raven, being Raven, has quite a few different friends and fans among DC's characters than Star does, with Darkseid, Ra's al Ghul and Etrigan all signing her yearbook. Here are two screen caps of Robin rising up on her autographs page, so you can see all of the signatures: 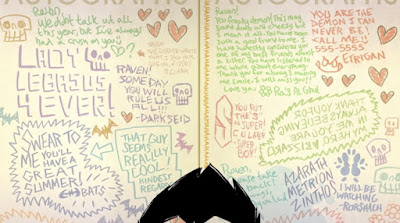 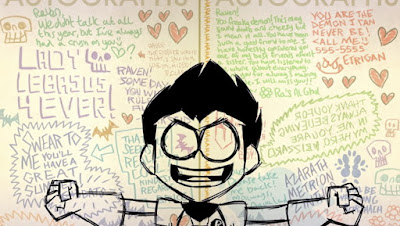 Look who signed right below Bizarro, and to the right of the magic words Robin scribbled in. There appears to be a drawing of a butterfly or your parents fighting or a woman unfulfilled after having sex with you (or whatever you might see in the image), and the message, "I will be watching you. –Rorshach." His name is spelled wrong too, as if they were intentionally skirting using the exact names of characters from Watchmen, but dang, Teen Titans Go!...those are some hardcore unexpected Watchmen allusions semi-hidden in your silly, absurdist comedy show for little kids and grown-ups who like things that are awesome (Teen Titans Go! is the only television show that both I and my four-year-old nephew are equally enthusiastic about).
Posted by Caleb at 8:11 PM

That is pretty awesome! Nite Owl was in one other episode. The one where Cyborg becomes Fleshy Guy and Robin sings the song about being a real boy (or something like that...I haven't seen it in a while, I just remember Nite Owl).

Btw, I love what Dr. Manhattan wrote in the yearbook!

Thank you for this comprehensive recap. I saw this episode last night and it blew my mind. Teen Titans Go is awesome!