Oh yeah, Nite Owl from Watchmen is also totally in an episode of Teen Titans Go! too 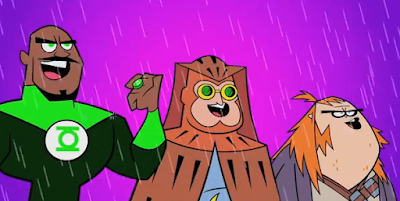 As Ashton Burge noted in the comments section to my previous post on Watchmen characters cameoing via signature in an episode of Teen Titans Go!, Watchmen character Nite Owl did one better and actually appeared on-scren for a split-second in the episode "Real Boy Adventures."

I was surprised to learn that, if only because I had just watched that episode within days of seeing the "Yearbook Madness" episode. If you haven't seen "Real Boy Adventures," and you should, the plot is this: Cyborg is disappointed that his mostly-robot body doesn't allow him to enjoy hot tubs, so Raven uses her magic to make him "a real boy" again. No longer a cyborg, he's forced to change his name from "Cyborg" to "Fleshy Guy," one of the many negative consequences to being a real boy.

Robin, a fellow real boy, tries to cheer him up by taking him on a "real boy adventure," which includes a musical number. That's the part where Nite Owl appears, chanting the chorus to the song along many other comics characters and historical figures. I didn't notice him the first time through, probably because I was so distracted by Batman's guitar solo after the lyrics ("You can dance all night in the rain real boy/Did you know Bruce Wayne is a real real boy?").

I'm fairly certain either Beast Boy or Robin also has a Nite Owl poster hanging in his bedroom, but I didn't check for screen-capping purposes.
Posted by Caleb at 10:55 AM