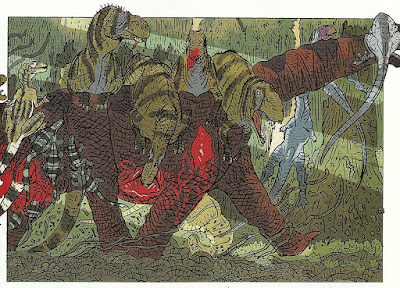 Age of Reptiles: Ancient Egyptians #4 (Dark Horse Comics) Oh my God, is that eve possible?! That sauropod is walking with at least eight carnivores of considerable size (and about as many smaller ones) riding it while simultaneously eating it alive! A Spinosaurus rips it open and knocks it down, and then all these other carnivores pounce on it and just start eating it, and it gets up and just starts walking away. Is that the most bad-ass thing any dinosaur has ever done? Is it the most bad-ass thing any living creature of any kind in the history of the world has ever done?

Sadly, he doesn't walk far, falling to the ground under the weight of the carnivores riding on him while eating him alive in a two-page splash on the following page. The next five pages then detail what happens to him (I guess I've decided without consciously deciding to do so that it's a him) and his body.

This is maybe the goriest, most violent comic released in the direct market this week. Which is saying something, because this came out on Wednesday, too.

In the final issue of his miniseries, writer/artist Ricardo Delgado resolves all of the various conflicts involving all of the characters who have survived to this issue in a pretty satisfying conclusion. I must confess, however, that in this issue, unlike the previous three, I kept writing dialogue in my head to accompany the silent images of the dinosaurs interacting. 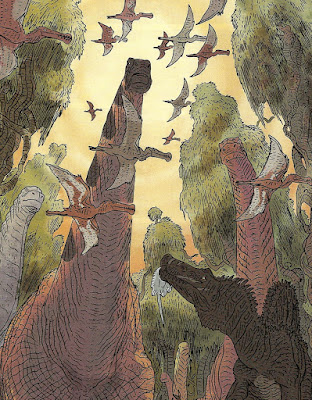 Like the sauropod in this panel? He's totally saying, "'Sup"...but in a menacing fashion.

And here in the sequence the Spinosaurus clearly says something very rude about that sauropod's mother. 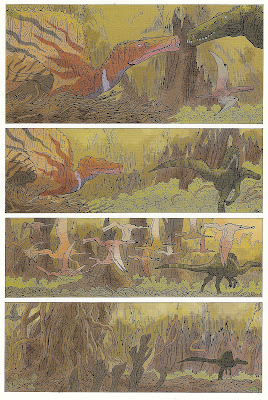 And, in the dramatic climax, the Spinosaurus definitely thinks morosely to himself that he couldn't be no kind of father to no one as he wanders off into the sunset, leaving his mate with her clutch of eggs. 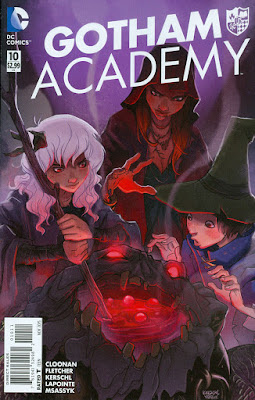 Gotham Academy #10 (DC Comics) The ladies of Detective Club take parts in Gotham Academy's production of Macbeth The Scottish Play in order to thoroughly investigate the seemingly-haunted theater from a ghost that might be that of Olive's late mother, the pyrokinetic super-villain Calamity, or might be an unrelated Phantom of the Theater.

Turns out the villain is the one most likely to have a beef with a thespian, and who is fairly spoiled on the cover. Keeping the book's tradition of repurposing minor characters from Batman TV shows as members of the faculty, the director of the school play is one Simon Trent (the actor character who played The Gray Ghost on a TV show within the TV show Batman: The Animated Series). It is perhaps appropriate then that the real identity of "The Phantom" is a Bat-villain who appears here in the same form he did on Batman: The Animated Series.

I'm not entirely sure I understood the villain's relationship to a student at the school, but that's par for the course with this title: The plots and storytelling are always just a little too muddy, and the comic a bit more confusing than it needs to be. Most issues seem like their illustrated from the second-to-last drafts of a comic script that still needs a bit more tweaking.

That said, this was one of the stronger issues in the series to date, and features a pretty much done-in-one story. It's taking this book a long time–way too long, really–to find its groove, but it seems to be just about there. I do hope it gets there before DC makes any final decisions about what books to cancel and what books to give more slack. 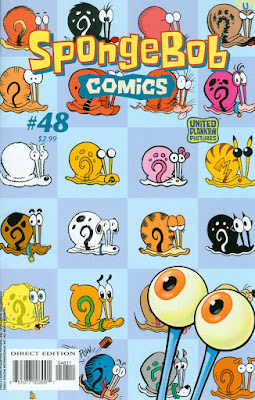 SpongeBob Cmoics #48 (United Plankton Pictures) It's an all-Gary issue of SpongeBob, featuring a fantastic cover by Jacob Chabot in which Gary is drawn and colored in the style of many other famous cartoon cats and dogs (and one cricket and one sponge). I think I've figured them all out, with the exception of the one behind Gary's right eyeball and the orange one with the prominent blue pupils between the Heathcliff and Bill The Cat-style Garys in the second column down.

I'm going to give up on the one behind the eyball... 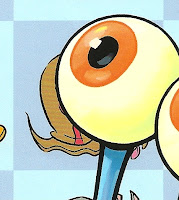 ...not having enough to go on.

But I'd be interested in any suggestions on the other one, this guy– 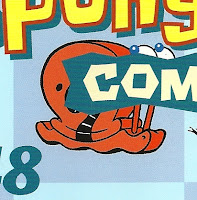 It's not Pokey, Gumby's horse friend is it? Wait...

Damn, I think it is!

Okay, never mind then; I guess I got 'em all except the one mostly obscured by Gary's right eye. I'm going to guess it's Marmaduke, but that's just a guess. 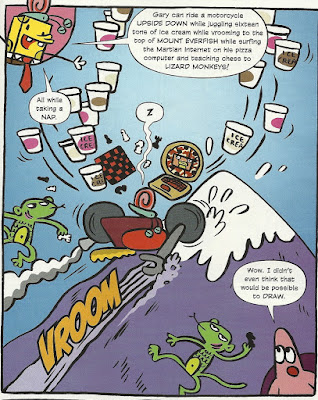 The longest story is Mark Martin's 16-pager about what Gary gets up to when SpongeBob leaves him alone to go to work. It's followed by a two-page strip by Jen Wang, a four-page strip drawn in typically distubing fashion by Tony Millionaire, four-pagers by Richard Pursel/Jacob Chabot and James Kochalka (check out his amazing panel above), a one-page story by David Lewman featuring oddly off-kilter art by Stephanie Yue that makes all of the characters look cuter than ever before, and Maris Wick's "Flotsam and Jetsam: Ocean Fact" feature, this time detailing four strange snails that live in the sea.

I found the most exciting page to be the issue's single ad, however, for next month's horror-themed issue: 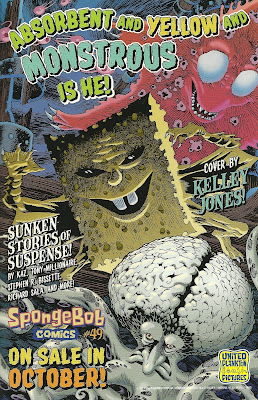 Kelley Jones! Drawing monstrous versions of Patrick, SpongeBob and Squidward! I had seen that image online before, but it looks even better on paper and in-person. More exciting still are some of the other contributors: Tony Millionaire, Stephen Bissette and Richard Sala? They've got some of my most favorite cartoonists in the whole damn world contributing to next month's issue of SpongeBob?! I can't wait.
Posted by Caleb at 9:22 PM