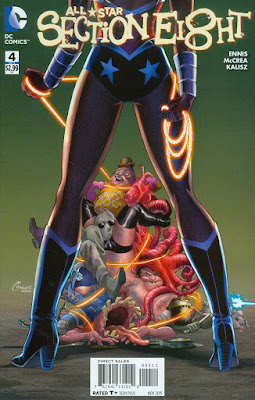 All-Star Section Eight #4 (DC Comics) This was actually released a few Wednesdays ago, but my shop had sold out and it wasn't on my pull-list, so the re-ordered issue didn't arrive until this Wednesday.

The special guest-star (and prospective eighth member of Section Eight) is, as you can no doubt tell from Amanda Conner's cover, is Wonder Woman. She arrives at Noonan's Sleazy Bar simply to tell off Sixpack and his teammates, storming out with the words "The only superheroine signing up with Section Eight is going to be one suffering from brain damage." And then Baytor, who is trying to hang a sign over the door with a cartoon mallet, accidentally WHHAAMMs Wonder Woman on the head, rendering her, well... 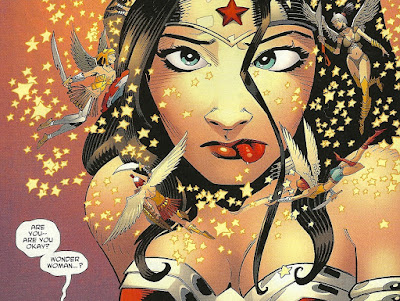 Still slightly more dignified then her portrayal in the Finchs' run on Wonder Woman.

This issue is extremely fraught, with various members of Section Eight discussing ethics, feminism ("I never hearda that") and that you can't say "retarded...it's not cool anymore." The fact that writer Garth Ennis has his various characters speaking both sides of many arguments on these matters is a pretty good indicator that he's making fun of the participants in some of the conversations and his own characters more than anything else, but it's still a bit of a minefield for a comics writer in the era of social media to traipse through. The Grapplah, in particular, seems to contradict himself constantly, stating the exact opposite point of view in alternate lines of dialogue.

So Wonder Woman has essentially been reduced to the mental age of a little girl, commencing a tea party with Dogwelder II ("How do you like your tea? I bet you like it with dogs welded to it!") and, upon meeting Bueno Excellente and Guts, she convinces them all to hold a wedding between the two. When she starts constructing a hotel/fort for the honeymoon, however, Baytor applies a well-known cure for head injuries sustained in all forms of pop fiction: He hits Wonder Woman in the head with the hammer again.

I suppose it's a good thing that Wonder Woman spends a majority of her panel-time addled out of her brain, as Ennis writes the non-brain-damaged Wonder Woman as a humorless, violent bully without an ounce of compassion (you know, like everyone else writers her in all of her other appearances outside of Sensation Comics). Artist John McCrea draws his own version of Wondy's costume; while the one on the cover is basically just her original New 52 get-up, McCra mysterious guide takes him beyond the bounds of life itself and into the mystical realea gives her a pair of biker shorts-like shorts rather than the bathing suit bottoms, and these are blue rather than black, and her top lacks the ribbing its usually drawn with.

Finally, this issue also contains a Tommy Monaghan cameo...sort of. A photo of him is seen hanging on the wall of Noonan's in the background of one panel. 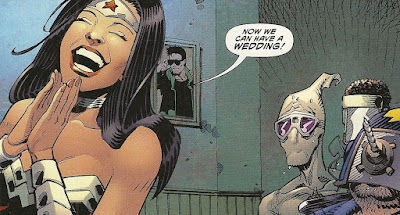 I'm not sure which hero is guest-starring in the penultimate fifth issue, but the next issue box says "Yo, What's Up, Vertigang!" and the solicitation mentions "a mysterious guide" who takes Sixpack "beyond the bounds of life itself and into the mystical realms," so I'm guessing Phantom Stranger, John Constantine or someone from the Trench Coat Brigade...? "Vertigang" makes it sound plural though, so maybe we'll be getting cameos from whichever former Vertigo characters Ennis and McCrea are allowed to mess around with. I certainly wouldn't mind seein what McCrea's Swamp Thing looks like...

Archie #3 (Archie Comics) It's Veronica Lodge's first day at school, and Archie volunteers to show her around...only to discover she has sufficient dirt on him to make him her willing slave, although he seems like he probably would have happily handed her a leash anyway. Jughead attempts to come to the rescue repeatedly, and he spends the entire issue trying to prevail on Betty to get involved as well.

I liked the way writer Mark Waid handled Veronica's introduction to the school and, in particular, her meeting with Betty, as they begin on the inevitable road to frenemies. Betty accidentally sees Veronica at her lowest and, being a decent human being, tries to reach out and help her; she's seen enough of Veronica to know she too is human and in need of a real friend. At the same time, Veronica almost immediately rebuffs her and makes her feel bad for helping. And then there's the small matter of Veronica's stranglehold on Archie.

It's only three issues in, and already Waid has done a pretty fine job of establishing a sizable chunk of the core cast, and how they relate to one another.

This issue also includes a classic reprint (and $3.99 for just 22 pages, it damn well better!), which was Veronica's first appearance. It's probably the strongest and funniest of the reprints that have been featured in the backs of these issues so far.

Batgirl #44 (DC) Bad news? Babs Tarr, this book's main selling point, is MIA this issue. Good news? Taking up drawing duties in Bengal, the artist responsible for the Endgame tie-in one-shot and a chunk of the Batgirl annual. And Bengal is really good at drawing things, even if Batgirl's mask looks slightly off to me around the cheeks, and there was a confusing panel or two in the climactic action scene.

This seemingly concludes The Velvet Tiger story arc, while pushing along several unrelated storylines, like a developing relationship between Babs and Luke Fox (son of Lucius and formerly Batwing II) and Frankie's ongoing quest to become the new Oracle. She doesn't actually use that name, but writers Cameron Stewart and Brenden Fletcher tease it as hard as they have yet, with Frankie having sent a package with the return address of "Delphi."

I understand the temptation to make Oracle a part of a Barbara Gordon comic, but I really don't like the idea of a new character becoming Oracle, and thus making Oracle a legacy character. With the DC Universe's timeline so ridiculously compressed now, to the point that there aren't any heroic legacies, something that's been a key part of the DC Universe for a really damn long time now, it seems weirds that, say, Barry Allen was the only Flash ever, for example, but we've already had three Batman, four Robins, two Catwomen and two Batwings in just five years. I mean, I guess Frankie would be the only Oracle post-New 52, but we'd still have to, like, talk about her as the second Oracle. Talking about DC Comics characters can just be so exhausting sometimes, you know? Everything needs a qualifier or three.

Providence #5 (Avatar Press) In which Alan Moore, Jacen Burrows and our protagonist Robert Black visit "The Dreams in The Witch House," and take a detour to visit the setting of "The Colour out of SPace." Chances are there are a whole mess of other references I didn't catch, beyond those introduced in previous issues, as Moore goes about connecting pretty much everything H.P. Lovecraft wrote into a mega-narrative with a shared setting, like the Lovecrafts body of work was the 1960s Marvel Universe or something.

This issue includes Brown Jenkin, here called "Mr. Jenkins," one of the more disturbing of Lovecraft's creations in terms of pure visuals, if you ask me. He behaves...differently, in a more graphic way htere that is in keeping with witch-lore, if not Lovecraft's exact portrayals. I liked the Elspeth character, who appears only briefly.
Posted by Caleb at 5:22 PM

Section Eight is of course, rude, crude, and occasionally lewd. Naturally, I enjoy it.