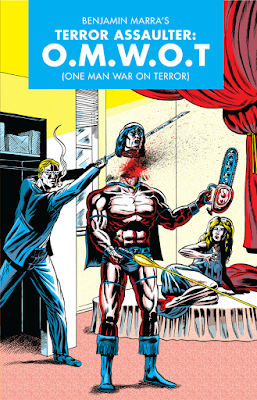 I reviewed the book at Comics Alliance, if you'd like to go read about it. It's...not for everyone. In fact, the sex scenes, while very funny (at least in the dialogue) and effective in their criticism of the American dream and the modern male fantasy life, will likely repel a lot of readers. So it's kind of a hard book to recommend, despite how goddam awesome it is. 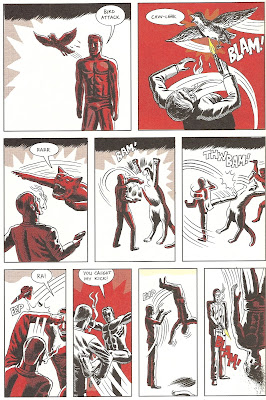 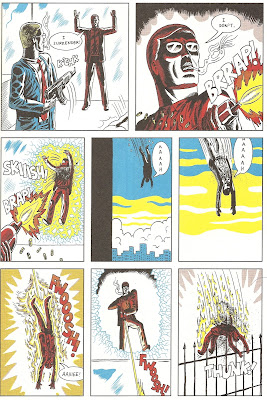 That was one of the several scenes that reminded me of the 1980s G.I. Joe cartoon, what with the animal sidekicks and all. I love how O.M.W.O.T. dispatches of the second villain though, and just how thoroughly he kills him. Not only is he shot out of a rather high window, but he also gets set on fire while plummeting to his death...atop the metal spikes of a fence.

It's the fact that O.M.W.O.T. apparently runs to go get a flame-thrower specifically to set that dude on fire while he's falling to his death that cracks me up. Welll, that and the fact that he was fast enough to pull it off.

I was a little surprised by how seemingly apolitical the book was too. Well, that's not right. It's not apolitical. I guess I was surprised by how unpartisan it was. I expected harsher criticism of the Bush administration, I guess, give the fact that the title features the "War On Terror" phrase from the Bush era lexicon, and the fact that George W. Bush in name-checked as the creator of the Terror Assaulter program.

But Marra's criticism of the military-industrial-political complex isn't limited to a single president or presidential administration (which is probably a good thing, given the fact that the current president has ramped up certain aspects of the so-called Global War On Terror–like drone strikes, for example–while downplaying other aspects, like using the term "Global War On Terror").

The "About The Author" section in the back of the book says that Marra "is also into world politics: 'Let me tell you something, bro...we are addicted to oil.'" That's about as direct as he gets anywhere, although the statement, like that page is suspect (His author photo, after all, has him posing in his underwear and a fur vest and sunglasses, holding a drink glass as he reclines in his bed.

The political nature of the book is more subtle, despite how un-subtle every other aspect of the book is. O.M.W.O.T. kills the bad guys–in fact, when his first sexual conquest confesses she doesn't even know his name, he replies, "Let's just say...'I kill the bad guys'"–he also kills plenty of other folks who happen to be standing anywhere near the bad guys.

One way to read it, then, is that O.M.W.O.T. himself is simply a metaphor for U.S. foreign policy, and this comic book is basically a political cartoon stretched into an awesome, novel-length comic book adventure.

Another aspect I didn't get into in my Comics Alliance review was that, in the last chapter, O.M.W.O.T. is forced to marry a woman who was his mortal enemy but who then had a sex change in prison and became a woman, who he repeatedly has sex with. While reading the last chapter of this book, I found myself wondering what those who were surprised, annoyed or offended by James Robinson and Greg Hinkle's second issue of Airboy might make of this comic.
Posted by Caleb at 7:16 PM