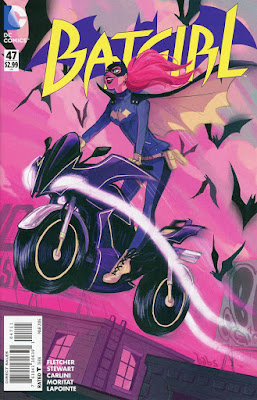 Batgirl #47 (DC Comics) This issue of Batgirl, featuring guest-art by Eleonora Carlini and Moritat, gives us a pretty good idea of what the theoretical, much hoped-for (at least by me) new iteration of the Birds of Prey could look like.

Batgirl Barbara Gordon recruits Spoiler for help on an undercover infiltration of a Gotham Police precinct to find out how they managed to access information that only she should have had access too, and naturally Spoiler invites along her roommate Bluebird. Frankie, who starts to call herself a name that begins with an "O" again before switching to "Operator" running the op from behind-the-scenes, Oracle-style, these newer, younger, cooler Birds of Prey go on what will be their first mission.

If, indeed, DC decides to launch a new BOP featuring these four and grumpy Black Canary, as the cover of March's Batgirl #49 sure seems to be hinting at. Hey, this issue also introduces two more artists who would be perfect for the gig of drawing such a Batgirl spin-off book, Moritat and Carlini.

This was a perfectly delightful comic, showcasing what makes three of Gotham's female vigilantes appealing and different from one another, and, if I'm being honest here, was a nice counterpoint to all the testosterone-fueled bromance of the recent "Robin War" event and large chunks of Batman & Robin Eternal (like this week's issue, which is all about how Tim Drake and Jason Todd are suddenly brothers or whatever in the New 52 continuity).

Special props should go to colorist Serge LaPointe who, as my friend (and Stephanie Brown fan) pointed out, took care to make sure Spoiler and Batgirl each wore different shades of purple. And hey, Bluebird's got some purple on her too; this is one very purple super-team!

Speaking of Bluebird, while both Carlini and Moritat drew here extremely well, it seems a shame that she's still wearing this nonsense: 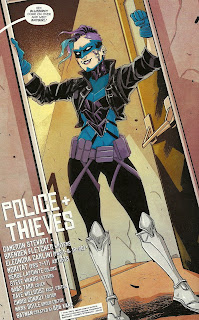 Batgirl is a comic that, after all, got really good when they redesigned the title character's costume, and regular artist Babs Tarr gives everyone she draws really cool clothes. We really need to address this costume situation at some point, DC, and hey, maybe Cameron Stewart and Babs Tarr are just the folks to do it... 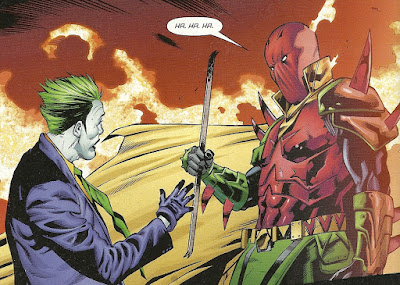 Batman & Robin Eternal #16 (DC) Remind me to never, ever complain about how dumb Jason Todd's various costumes are, because this issue ably demonstrates that, as terrible as they have all been, they could be much, much worse. That, for example, is what he wears in a chemically-induced dream/fantasy sequence where the adult Todd rescues his younger self from being beaten to death by The Joker.

The Red Hood/Red Robin/Azrael plot takes up most of this issue, with only a few pages devoted to the "several years ago" plot-line, and it's particularly poorly drawn this issue (by Andrea Mutti, Roger Robinson and Goran Sudzuka), with very basic, panel-to-panel continuity falling apart. Like, in one panel, Todd holds a crowbar in his right hand, in the next it's gone and he's holding the Joker's throat with his right hand, and then in the next the crowbar is back. Stuff like that. 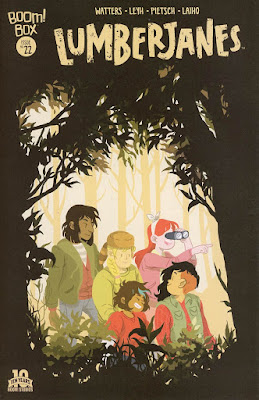 Lumberjanes #22 (Boom Studios) The werewolf vs. selkies plot turns out to not be as simple as it originally seemed, which is cool, because I kinda like both sides of the conflict, and didn't want to believe either of them were truly in the wrong. Meanwhile, the Bear Witch, Molly and Ripley investigate The Other Place, which seems to hold the key to why the woods around the camp are so weird and, perhaps, just what is really going on in the shape-changer conflict. It took a little getting used to, but I'm really enjoying Carey Pietsch's take on the characters, and her art in general, now. 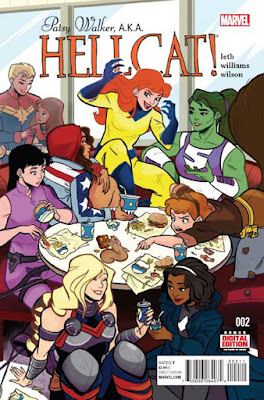 Patsy Walker, A.K.A. Hellcat! #2 (Marvel Entertainment) Despite really liking the first issue of this new series, I wasn't about to add it to my pull-list or anything. I mean, yes, it's great, but $3.99 for a 20-page Marvel comic regularly interrupted by ads for some dumb Marvel merch? No thank you, Marvel, I will just wait for the trade as I do with Unbeatable Squirrel Girl, Howard The Duck and Ms. Marvel, thank you very much.

My friend and neighbor bought this issue though and, after reading it, insisted I read it too. I resisted, telling her that I planned on getting the trade, and I don't want to read too many of the individual issues, or by the time I get the trade I'll have already read a significant portion of it. But she could not be dissuaded; she insisted I read it so that I could review it here and 1.) Tell you all how awesome it is and 2.) Publicly advocate Marvel releasing a collection of the original Patsy Walker comics, as the reprinting of those comics is a major conflict within this comic.

So first of all, yes, this book is awesome. I laughed aloud repeatedly, and not only is Kate Leth's writing very sharp and artist Brittney L. Williams' art fantastic (she's great at costuming, everyone is ridiculously cute and I basically just want to eat this comic, it looks so good) but they work well together to tell subtle verbal/visual jokes (see panels one and four on page three, for a good example). The last two pages, a scene the cover covers, is amazing, and it was a genuine treat to see Williams' versions of all those Marvel heroines (That's Valkyrie, not the new Thor, by the way; I guess she got a new costume, with more Thor-ish colors...?). Man, just look at that cover. I love Squirrel Girl's conflict with her squirrel over that brownie, and the little detail of the acorns falling out of her pocket.

Anyway, Patsy Walker, A.K.A. Hellcat! is really good. Tuesday I was certain that Unbeatable Squirrel Girl was my favorite Marvel comic, and Howard The Duck my second favorite. Now I don't even know...
Posted by Caleb at 9:24 PM

Patsy Walker was my favorite book this week, and since Ms Marvel also came out, that's saying something!

I've read a bunch of the old Patsy Walker funnybooks. They are awesome and I want one of those giant Adamantium collections of all the Miss America Magazine strips. I love the new creative team for reflecting the feel (and continuity!!!) of these ancient strips with a wholly contemporary twist. I'd rather spend $150-250 on an enormous tome than the same amount on 5-10 browning back issues where pieces are breaking off as I turn the pages.