Marvel Entertainment will be releasing a whole bunch of comic books this April. How many, and which ones? Well, this isn't the right place to look for that sort of information. Try here, instead. This is the place to look for the answer to the question, "What thoughts did Caleb have while reading through Marvel's April solicits?" 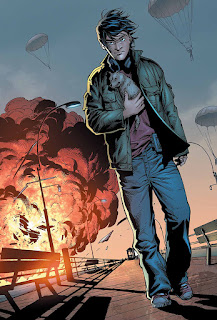 Amadeus Cho: GENIUS AT WORK
GREG PAK & FRED VAN LENTE (W) • TAKESHI MIYAZAWA, GARY FRANK & RODNEY BUCHEMI (A)
Cover by GARY FRANK
• Get to know Cho! That's teen genius Amadeus Cho, the seventh smartest person in the world -- but who's counting?
• When Cho is declared "Mastermind Excello" by an intelligence contest, his life suddenly spins out of control -- and now he'll need all his smarts just to stay alive!
• Luckily, Cho -- and his adorable coyote pup, Kirby -- quickly meet and befriend two of the Marvel Universe's strongest powerhouses: Hercules and the Incredible Hulk!
• When Cho investigates his sister's fate, a complex web begins to unravel. Who has been manipulating him? And why?
• Can the seventh smartest person on the planet solve the riddle of his own past and future?
• Collecting material from AMAZING FANTASY (2004) #15; INCREDIBLE HULK (2000) #100; and INCREDIBLE HERCULES #126, #133, #135 and #137.
104 PGS./ One-Shot/Rated T+ ...$7.99

I'm curious about the exact format of this "one-shot" collection–Will it have a spine or staples? Will there be ads or no?–as the page-count is high enough to be that of a trade paperback, but the cost is quite low. This is apparently being produced for readers of the The Totally Awesome Hulk, in which Amadeus Cho is the Marvel Universe's latest Hulk, who might have missed her earlier appearances in the well-named Incredible Hercules and other comics. I think I've read all of these previously, but it's now been long enough that I can't remember if I ever read Amazing Fantasy or not. So I might not be able to vouch for all 104 pages of this book, but I can vouch for most of them, and they are quite good.

So I'd recommend this. Actually, I'd recommend you track down Incredible Hercules first, but if that's too many trades for you or they are too hard to find, then this is probably a viable Plan B. 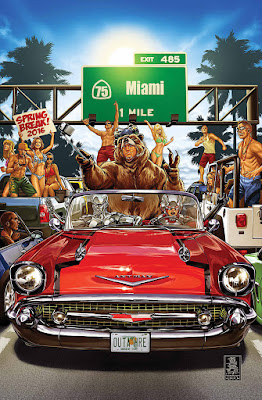 Oh my God Grizzly has got to be dying in that costume. That is one animal-themed power-suit that was definitely made for New York City weather, and not Miami weather. 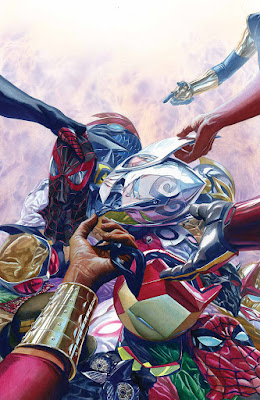 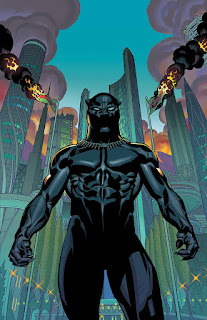 BLACK PANTHER #1
TA-NEHISI COATES (W) • BRIAN STELFREEZE (A/C)
...
A new era for the Black Panther starts here!
Written by MacArthur Genius and National Book Award winner TA-NEHISI COATES (Between the World and Me) and illustrated by living legend BRIAN STELFREEZE, "A Nation Under Our Feet" is a story about dramatic upheaval in Wakanda and the Black Panther's struggle to do right by his people as their ruler. The indomitable will of Wakanda -- the famed African nation known for its vast wealth, advanced technology and warrior traditions -- has long been reflected in the will of its monarchs, the Black Panthers. But now the current Black Panther, T'Challa, finds that will tested by a superhuman terrorist group called The People that has sparked a violent uprising among the citizens of Wakanda. T'Challa knows the country must change to survive -- the question is, will the Black Panther survive the change?
40 PGS./Rated T+ ...$4.99

I'm really excited about Coates coming on as writer for this new Black Panther series, which will mean Black Panther will have the highest-profile, most widely-known and read writer of any of Marvel's books come April. I'm not crazy about Stelfreeze's art, but then, it's been a really long time since I've seen him draw interiors, so there is a level of curiosity there.

I'm kind of curious to see how much the title will stand on its own, and how much it will deal with where Marvel "left off" with the Panther. I mean, the last place I saw him was New Avengers, where he spent a few years working shoulder to shoulder with Marvel's various science dicks to try and save the universe, no matter how many lives and/or planets would be lost in the process. In fact, the very last collection of New Avengers I read featured Panther attempting to murder Namor, so he's not exactly the most likable guy in the world. That was all leading in to Secret Wars though, where at least some degree of continuity/cosmic rejiggering must have went on, so perhaps he's not quite the broken character he seemed in New Avengers. We'll see.

Well, I'll see; I imagine most of you have already read Secret Wars by this point, right...?

At any rate, let's hear it for a brand-new series featuring Black Panther, and from about as high-profile creative team as one could imagine. 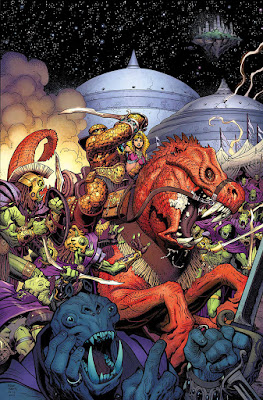 Arthur Adams' cover for Guardians of the Galaxy #7 looks incredible, doesn't it? Too bad the interior is by Valerie Schitt, and will thus look absolutely nothing like that. 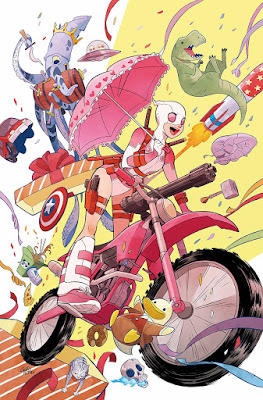 Gwenpool #1
CHRISTOPHER HASTINGS (W) • GURIHIRU (A/C)
...
2015's overnight internet sensation takes center stage in her own ongoing series! Gwen Poole used to be a comic book reader just like you...until she woke up in a world where the characters she read about seemed to be real! But they can't be, right? This must all be fake, or a dream or something, right? And you know what that means...NO CONSEQUENCES! Could Gwenpool truly be Marvel's least responsible and least role-modely character to date? She can if she tries!
40 PGS./Rated T ...$4.99


I love GURIHIRU, and wish they were drawing...well, pretty much anything else for Marvel.


HOWARD THE DUCK VOL. 1: DUCK HUNT TPB
Written by CHIP ZDARSKY, CHRIS HASTINGS & RYAN NORTH
Penciled by JOE QUINONES, DANILO BEYRUTH & ERICA HENDERSON
Cover by JOE QUINONES
Trapped in a world he's grown accustomed to! The flightless fowl gets a new beginning, with the exact same superstar creative lineup as before! But this time, the whole entire universe is after Howard -- and that includes the would-be new herald of Galactus! As the duck hunt begins, things get totally cosmic with the Silver Surfer, the Collector, the Stranger and the Guardians of the Galaxy! Plus: Brace yourself for the two most sensational, fan-favorite, Internet-breaking Marvel team-ups of the year! She's a little nutty, he's downright quackers -- it's Squirrel Girl and Howard! And in a tale that will launch a thousand cosplay double-acts, meet Gwenpool! The Duck is back, and this means "Waugh!" Collecting HOWARD THE DUCK (2015B) #1-6 and UNBEATABLE SQUIRREL GIRL (2015B) #6.
160 PGS./Rated T+ ...$17.99

I was about to be pretty pissed at Marvel for publishing a second Howard The Duck Vol. 1 by the CHip Zdarsky and Joe Quinones team, but I just checked the spine of the collection I just recently bought, and I see now that it's actually labeled Howard The Duck Vol. 0, so that's cool. Well, it's still kinda stupid that Marvel relaunched the Zdarsky/Quinones Howard The Duck series after just five issues, but it would been far stupider to label the first two trades "Vol. 1," so, you know, it could have been worse. 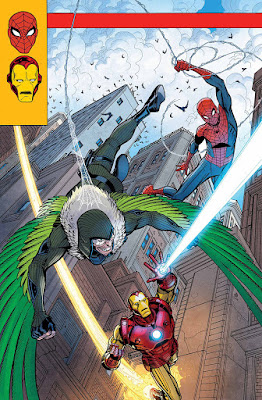 Nick Bradshaw is a hell of an artist, as is evident on this cover for April's issue of Spidey. I'm not crazy about The Vulture wearing a hood, though. You're bald, Vulture! It's nothing to be ashamed of! Don't cover your bald head up; let the world see that you're bald...and proud!

"VIKING HULK" is one of those terms I didn't realize I really liked until I saw it in print. 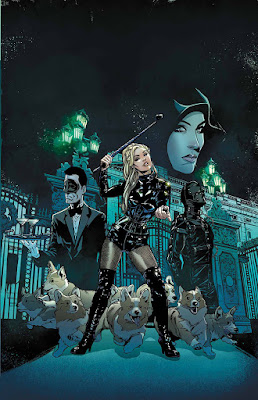 MOCKINGBIRD #2
CHELSEA CAIN (W) • KATE NIEMCZYK (A)
Cover by JOELLE JONES
...
• Lance Hunter's undercover gig at the London Hellfire Club has gone south and it's up to Mockingbird to rescue him, save the Queen of England, and fight off a passel of kinkily clad sadist toffs.
• Plus zombis! And corgis!
32 PGS./Rated T+ ...$3.99


SCARLET WITCH #5
JAMES ROBINSON (W) • JAVIER PULIDO (A)
COVER BY DAVID AJA
• WANDA'S journey takes her to Spain!
• There she finds an old vineyard converted from a haunted church where witches used to be burned at the stake.
• But to unravel the mystery of the hauntings, she must first fight off the ghosts of the SPANISH INQUISITION!
32 PGS./Rated T+ ...$3.99 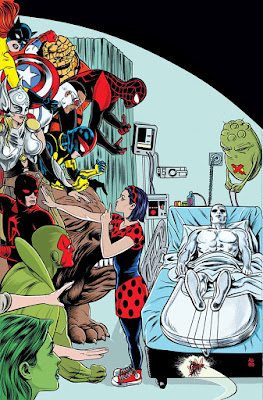 Here is Mike Allred's awesome cover for April's issue of The Silver Surfer, depicting a big chunk of the Marvel Universe, as drawn by Allred. The best part of this cover? It's on a book in which the insides will look just like the cover, as Allred is also the interior artist.


THE VISION #6
TOM KING (W) • GABRIEL HERNANDEZ WALTA (A)
Cover by MARCO D'ALFONSO
• The book everyone is talking about.
• The first arc of this acclaimed series comes to its frightening climax. The bodies will not stay buried. The truth will not remain hidden. And The Vision will never be the same.
32 PGS./Rated T+ ...$3.99

Are people talking about this book? If so, they seem to be doing it out of earshot of me. 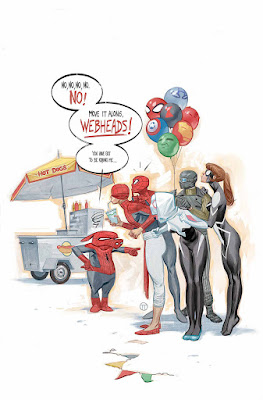 Cute cover for Web Warriors #6 by Julian Totino Tedesco. If one of your teammates is an anthropomorphic pig, you really shouldn't eat hot dogs. Or pork. Or meat, really.
Posted by Caleb at 7:12 PM

The Vision is surprisingly very, very good. Not at all what I expected from the initial solicitations.

Another thumbs up for the Vision.

I've been talking about "The Vision" a bunch on my blog. So, not in earshot of you, but within web-shot?