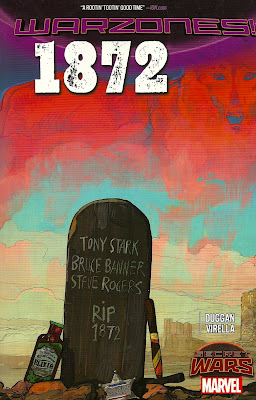 There’s a blurb on the back of this trade, which collects the four-issue 1872 miniseries, that cracked me up: “I’m not a fan of Westerns, but this comic book may have just changed my opinion of them.”

I didn’t read the entire review the quote is pulled from, and am unfamiliar with the website it’s attributed to, but the sentiment it implies amuses me. That all it takes to get a superhero comic fan to become a fan of the Western is to set a superhero comic in the Old West, and put cowboy hats on the fan’s favorite superheroes.

For that’s basically all 1872 does; I suppose you could call it a Western, but it’s more of a superhero comic in Western drag. One of the many, many highly tangential Secret Wars tie-ins, the series is more of a DC-style Elseworlds comic than a traditional Marvel What If…? comic. That is, rather than taking a particular moment in Marvel Comics history as a starting point and asking what if someone zagged instead of zigging, it simply transposes the modern Marvel superheroes to a different setting, and plops a simple, A-to-B storyline in the middle of that setting, letting the variants of the familiar characters do most of the heavy-lifting in terms of entertaining the readers.

The closest relative I can think of in an alternate universe Marvel comic is probably Marvel 1602, which the slightly re-titled trade collection at least seems to be trying to echo.

None of which is to imply that 1872 is bad, of course. It is, in fact, quite well-made, and I found it to be an extremely entertaining, even rip-roaring super-comic. It’s just not much of a Western, really, as that blurb implies (and Marvel's choice to use that blurb makes it all the more amusing), nor is much of a Secret Wars tie-in, despite the big “Warzones” logo emblazoned across the top and the smaller Secret Wars slug in the lower right corner.

One can, of course, roll one’s eyes at the tenuous rationale that Marvel had for publishing many of their Secret Wars miniseries while still being glad of the fact that they published them. And this is a good example. It’s got nothing to do with Secret Wars, really (other than the fact that Doctor Doom temporarily scrambled the world into a sort of Epcot Center of alternate realities, and this is one of ‘em). The flip side of that is, of course, one need not know anything at all about Secret Wars to be able to enjoy 1872.

The hero of the series, written by Gerry Duggan and drawn by Nick Virella, is Red Wolf, a reimagined version of the old, minor Marvel hero, who recently earned his own ongoing title, Marvel’s first to star a Native American character, for whatever that’s worth (after the publisher used this series as a means to reintroduce the character).

He is caught trying to blow up a dam that Governor Roxxon erected and that, incidentally, denies his people of water. The boys that caught him work for Mayor Fisk, and they are intent on lynching him, but Sheriff Steve Rogers intervenes, insisting that Red Wolf get a fair trial before a judge. Rogers is, of course, willing to shoot it out with anyone who insists on taking the law into their own hands.

Rogers is naturally killed by Fisk and Roxxon’s hired guns, but not before thoroughly inspiring the hell out of Red Wolf, who picks up Captain America Sheriff Rogers’ star by the end of the series.

With the help of various late 19th-century, American frontier variants of the Avengers, Red Wolf is intent on cleaning up the town of Timely (get it?) once and for all.

The most easily Western-ized villains show up here, including sharp-shooting card shark Bullseye, mountain man Grizzly and exotic-looking Asian assassin Elektra. As well, as, rather randomly, Otto Octavius, who has six six-guns, four of which are mounted on spring-loaded mechanical arms mounted under his coat.

It’s interesting to see where Duggan finds room for various characters, like The Vision being a mechanical fortune-telling machine called Stark’s Vision of The Future, or Carol Danvers as a frontier suffragette (who’s movement includes Misty Knight, here with a brace on her arm instead of having an actual robot arm), or Simon Williams as a douche-bag Roxxon enforcer.

Duggan likely goes overboard with Marvel-izing Timely, so that Stark must naturally build an Iron Man suit to don instead of any more practical invention simply because he’s Iron Man in the regular Marvel Universe, and Banner isn’t merely forced to drink the luminescent, green liquid bombs he’s created to blow up the dam by the sinister Williams, but he eventually transforms into a monster because of it…if only off-panel, and in the epilogue.

Duggan seems to have been consciously setting up the upcoming Red Wolf title (which is written not by Duggan, but instead by Nathan Edmondson), or at least wanted to get all his ideas on the page, as the rather lengthy epilogue features a suggestion of an 1872 Spider-Man, as well as giving a few panels to 1872 Deadpool and 1872 Punisher, before the rather elegant reveal of the Red Wolf’s Avengers team.

“Rogers may not have lived to see his revolution take hold in Timely, but…” narrator newspaperman Ben Urich writes in the last panels, “…his Avengers are protecting Timely from within and without.” 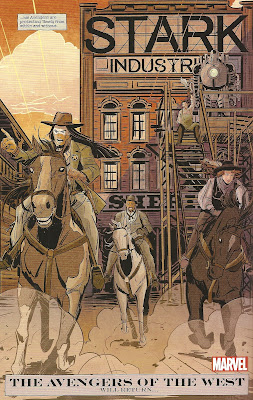 Virella is probably the real star here. Sure, Duggan does a fine job of translating the current heroes of the Marvel Universe into Western version of themselves, but the art is extremely accomplished. The acting and figure-work are great, and there’s just enough scratchiness to the line-work to give it a sense of urgency.

The last panel includes the words “THE AVENGERS OF THE WEST will return…”, and that is perhaps a reference to the Red Wolf ongoing, although it's kind of strange they don't just say as much there. Red Wolf is apparently set in this alternate Marvel Universe, which somehow survived the end of Secret Wars and the de-scrambling of Battleworld, I guess.

Because a four-issue miniseries does not a $15.99 trade make, so Marvel includes two bonus stories, both of which star Red Wolf. The first of these is a reprint of 1970's Avengers #80, by Roy Thomas and John Buscema, featuring the first appearance and origin of the character they created. It ends with a cliffhanger, which seems an odd choice to include, as we don't exactly get to see how Red Wolf's first act as a superhero turns out. The second is a short, 8-page Red Wolf solo story from 1994's Marvel Comics Presents #170, featuring a story by Alan Cowsill and art by Jimmy Chung and Martin Giffiths. It's an extremely '90s story of Red Wolf being an extremely '90s grim and gritty superhero, but props to Cowsill for fitting an entire story into so few pages, even if it is a derivative and ultimately uninteresting one. I like the way Chung draws Red Wolf's new pet wolf Lobo, who is here still an adorable little puppy that looks more pomeranian than wolf. 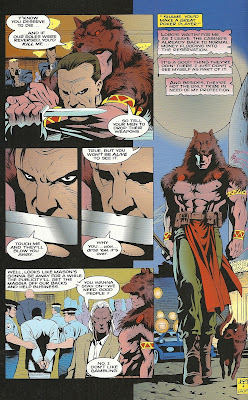