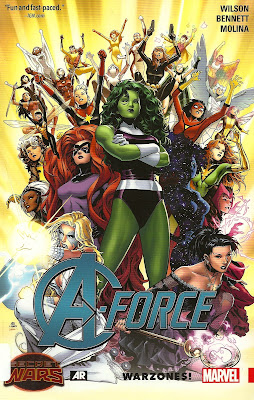 I read the first issue of writers G. Willow Wilson and Marguerite Bennett and pencil artist Jorge Molina's five-issue A-Force miniseries shortly after it was first released, and had summed it up thusly: "It's not very good, but it's not bad either; it's well-crafted, What If..?-style continuity gobbledygook." The series has since ended and been collected and published as A-Force Vol. 0, and I'm afraid reading the other four-fifths of the series didn't alter that assessment any.

If anything, I disliked the trade more than I disliked that first single issue, as with so much of the story yet-to-be-published, one could at least hope it would get better in the following four issues.

Unlike the handful of Secret Wars-related collections I've read so far (Runaways, Weirdworld, 1872), A-Force is quite deeply rooted in the particulars of the main series' "Battleworld" setting, and completely lacking in any sort of premise, or even organizing principle, of its own. So on the one hand, it seems overly concerned with the specifics of Secret Wars and Battleworld, but, on the other hand, it seems completely random in its construction and narrative.

This particular region/domain of Battleworld is a tiny, Mediterranean-style island home to versions of just about every superhero in the Marvel Universe, plenty of civilians and zero supervillains. It's unclear what the super-people do all day, or why they even bother with costumes and codenames. She-Hulk is the domain's "Baroness," which is the local ruler who answers to Victor Von Doom, god-king of Battleworld. The borders of Battleworld are strictly patrolled and enforced by The Thors, which are various Marvel heroes who have been Thor-ized. There are a lot of rules and politics involved in administration and borders, which drive the plot of this mini in a way that is unusual among the few books I've read so far. In fact, the central conflict of A-Force involves a bad actor gaming the rules of Battleworld for political gain. So not the most exciting of plotlines, if you're not really, really into that aspect of Secret Wars.

As for the premise of the series, it seems like it was decided on some meta, macro level well ahead of the first draft of the script. The idea was apparently What If...All The Avengers Were Women?, loudly declared on the cover of the first issue (and the trade collection) in which Jim Cheung draws pretty much every Marvel heroine he can fit in a single image, even those who don't get so much as a cameo inside the book (Snowbird? Moondragon?). Marvel quickly adopted "A-Force" as a way to brand comics starring their female heroes, too, as they launched those A-Force Presents anthology collections of early issues of Thor, She-Hulk, Ms. Marvel and so on.

But the story within never addresses the fact that Arcadia's completely unnecessary superhero team–again, no super-villains, no street crime and a population that seems to be about 75% superhero–consists only of female super-people (Luke Cage, Black Bolt and Namor cameo in the first issue; by the last issue, we'll also see that Black Panther, Commander Rogers, The Winter Soldier, Colossus, Gambit and other male heroes make their homes in Arcadia too). And the particular female characters who make up the team are pretty random: She-Hulk, Medusa, Dazzler, Captain Marvel, Loki, Nico Minoru and America "Miss America" Chavez (Spider-Woman and Pixie are among the characters who seem to be on the team too, but don't get much panel-time). Apparently these are just the characters Bennett and/or Wilson and/or Molina wanted to write about and/or draw for five issues (Molina's preferences might indicate why they chose to use the disco-era version of Dazzler, roller skates and all; I'm assuming he just really liked drawing her plunging neckline in that particular costume, given how often it's in the book; in terms of characterization, the characters are all completely interchangeable, and any handful of characters could fill the roles this handful play).

Adding to the shoulder-shrugging randomness of a core super-team consisting of a pair of Avengers, an Inhumans/Fantastic Four character, a member of the X-Men, one of The Runaways and the trans-feminated version of Thor's archenemy is the fact that everyone's powers seem weird and random. Miss America and Dazzler can fly now, for example, and Nico's magic powers don't work like they did in Runaways. Oh, and the relationships are all kinda weird. Like Loki is the mother figure of Nico and America, who are the best friends in the world here, despite the fact that I don't think they've ever even met prior to this comic...?

So, what have we got? A-Force is on a routine patrol when suddenly they are attacked by a Megaladon. America throws it so hard that it lands outside of Arcadia's domain, and so a Thor version of The Falcon shows up to arrest her, and exile her to somewhere. Everyone's mad that She-Hulk was unable to stop this from happening (Despite arguing with Dr. Strange, who is Dr. Doom's "sherrif"...?), but, when she investigates, she finds that the prehistoric monster shark was imported via a magical portal.

Later, a little girl who looks like a night sky falls to the Earth and befriends Nico. This is a new character named Singularity. And another portal opens, this one dropping a Sentinel on Arcadia, and when Shulkie and company follow it back to where it came from, more members of the Thor Coprs–Valkyrie, Gamorra and Sif–show up to make more arrests. It's quickly determined that the person opening the portals is using Asgardian magic, and thus the person causing all of the trouble turns out to be the one who is literally the only supervillain in the whole domain.

When she's busted, Loki plans to take Arcadia down with her, knocking down a wall separating their domain from the next one over, which is apparently that of the Marvel Zombies. That, at least, leads to a fifth issue that consists mostly of Marvel heroes fighting zombies, and cameos aplenty. This is actually a lot of fun, if only in a spot-the-character kind of way, as a reader can wait to see if their favorites show up in a panel, several of which aim for cute little pairings, like Spider-Gwen rescuing MJ, or Jessica Jones protecting Luke and Danielle or living light-show characters Dazzler, Jubilee and Karolina side by side. I liked seeing that Nico wasn't the only Runaway on Arcadia, at least; Gert shows up atop Old Lace, and Molly shares a panel with Colossus.

Like the Weirdworld collection, this one is labeled "Vol. 0" because it's leading to a new ongoing series, set in the "real" (and post-Secret Wars) Marvel Universe. Presumably that will have a clearly defined premise of some sort, beyond "The Creators Liked These Characters And Had 100 Pages To Kill On A Secret Wars Tie-In."
Posted by Caleb at 6:43 PM

I originally had high hopes for this series when it first debuted, but man, it sure deteriorated quickly, didn't it?

Ok, to be clear, the content of this is not super entertaining, a problem that afflicts a lot of the Battleworld titles. But Battleworld (to the extent that it has any purpose) is meant to create unusual groupings and circumstances, so why should this be any different. It's not clear to me why the fact that the team is all women should be a thing. The Defenders were all male (at least in most iterations that I can remember) and presumably there were at least a few female superheroes around. Did that seem jarring? Examples could be multiplied until we both lose consciousness.

And then there is that matter of the larger context. Look at who is producing this and think about why it's being done. Personally, I keep getting issues of this not because I necessarily think it's awesome (I don't) but because it's important for Marvel to get the right kind of feedback such that they don't fall back into simple dude-ocracy. I understand that this is probably a less important consideration for you than purely aesthetic concerns, but it's a thing.

In any case, the question that should be asked is not "why is it all ladies?" but rather, "why should one care that it is?"