I was depressed, so I went to Barnes and Noble and read some comics. They didn't help.

I had been stuck inside my house with some rather debilitating sadness for a few days, so when I finally got too sick of sleeping and pacing around here, I decided I would go sit in the book store and read. Better-lighting, people around, not being the house–those sorts of things can sometimes be good for what ails you. I packed a bag of my books to take with me, so that if nothing on the shelves there grabbed my interest, I'd still have stuff to read. 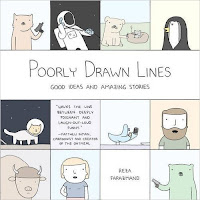 The first book I pulled from my bag was Poorly Drawn Lines: Good Ideas and Amazing Stories by Reza Farazmand. I picked this up at the library the other day, and have been carrying it around for a bit. Are you familiar with Poorly Drawn Lines or Reza Farazmand? If so, then all you really need to know that this is a collection of his webcomics, plus some new material. And some short, comedic prose stories. If you are not already familiar with the cartoonist or his cartoons I will tell you about them briefly.

First, they are funny. Second, the title is wrong; the lines are all very well drawn. Farazmand's artwork is very simple–his ghost, for example, is even more abstracted than James Kochakla's Squiggle–but that simplicity only adds to the brutal deadpan of most of the jokes. It's hard for a character to emote when their eyes are just two tiny dots, you know? 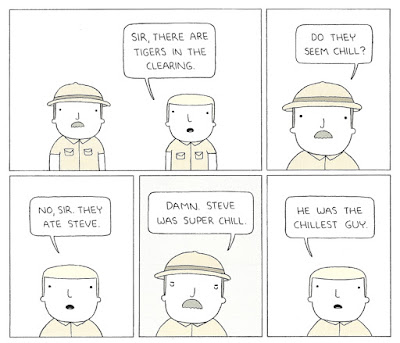 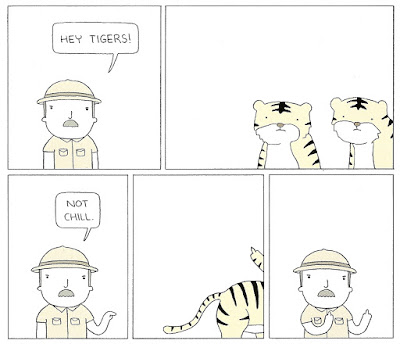 There aren't any running gags, really, but a few characters make repeat appearances, like the guy with the beard (Farazmand draws great beards, even when on babies or ladybugs), a large green bear first introduced as Ernesto, the space bear, and his friend Kevin, a pigeon.

I laughed at a lot of jokes.

The prose was sort of unwelcome, as I don't like switching gears between comics and prose, but it should be noted that the prose is all very, very short–like, two pages per story–and they have a similar point-of-view as the cartoons. Still, I don't like prose in my comics, man. Like, coffee is good. And tea is good. But if you put a tea bag in a cup of coffee...? Why would you do that...?

Anyway, I would recommend you read this book. Or at least check out the website, if you are too lazy to seek out an actual bok. 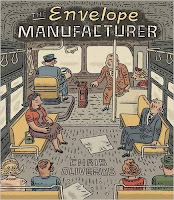 After that I read The Envelope Manufacturer by Chris Oliveros, which is what I suppose you could call a feel-bad book. Oliveros' name likely sounds familiar to you, even if you can't place his work at the mention of his name. He was the founder of Drawn & Quarterly, which publishes about half of the really, really good comics in North America (Fantagraphics publishing the other half), and was its publisher until 2015, when he stepped down to consulting publisher status, presumably to spend more time with The Envelope Manufacturer.

The press release calls it "An account of obsolete machinery and outmoded business planning," chronicling the hardships and suffering experienced by "a small company as it struggles to adapt to a changing economic landscape." And it's from a guy in comics publishing! Surely I'm not the only one who saw the potential parallels there.

Well, it's not a terribly comical comic book, despite some black humor around the edges (like the guy who seemingly regularly takes to the ledge outside his office window as if to jump, to the point it's not exactly a pressing emergency to see him out there.

An incredibly depressing read, it's about the title character and he and his company's downward spiral, as his two employees and his own wife stick by him out of intertia and the fact that they've already invested so much of their time in him and the company, but eventually reality sets in as it must–but not before a few flights of fancy, including a pretty bravura scene where the protagonist seems to jump out the window himself, and carries on a long conversation with his employees while he slowly, slowly, slowly plummets to his death.

Oliveros draws the hell out of all the weird, old-timey machines apparently used in envelope manufacturing, and other, minor period details, with the panels often focused on objects, machines or parts of the city instead of the characters, who almost never appear in anything other than a long-shot.

It's a lot of fun to look at, but it's a sad story, one probably best not to read when one is already sad.

I had a couple more books in my man-purse–second hand collections of Marvel miniseries Blaze of Glory: The last Ride of the Western Heroes by John Ostrander and Leonardo Manco and Vengeance by Joe Casey and Nick Dragotta–but I opted to pull something off the shelves to read, instead.

I selected Star Wars: Darth Vader Vol.2: Shadows and Secrets. I liked the goofily-entitled Star Wars: Darth Vader VOl.1: Vader, okay, but I'm not a huge fan of artist Salvador Larocca, so I decided I would follow the Jason Aaron-written Star Wars in trade, and maybe just follow this one in trades-borrowed-from-the-library, or pulled from the shelves of my local Barnes and Noble, read there, and then placed back on the shelf, unpurchased.

I liked this one a little better. Larocca's art remains excellent when drawing helmets, droids and aliens, but I find his human likenesses a little off-putting. Luckily, there are relatively few human in the Darth Vader book, just Doctor Aphra and the occasional Imperial officer or unfortunate human victim.

While the first volume leaned a little heavily on aspects I didn't care for (The Emperor's creation of "rivals" for Vader, none of whom are very compelling), this one goes deep in Vader's schemeing, as he tries to carve out his own secret fiefdom and agents to pursue his own agenda, one that is at odds with his superiors in the Empire, up to and including The Emperor himself.

So in this volume there's a pretty neat heist in which Aphra and her robo-pas, the evill versions of C-3PO and R2-D2, form an alliance with a handful of bounty hunters, including the evil version of Chewbacca, and Empire Strikes Back cameos IG-90 (the droid bounty hunter that looked like an evil black crayon) and Bossk (the lizard guy) make off with a shit-ton of money. There are several interactions with crime bosses, including a caped Greedo. Oh and Vader and an Imperial partner, the Empire's version of Sherlock Holmes, are tasked with trying to figure out who pulled the heist, which was of course done at Vader's behest. Finally the search for Luke Skywalker takes an unexpected twist, when Aphra follows one hell of an unlikely lead: The mortician on Naboo who prepared Queen Amidala's body.

It's all evil, all the time here, but writer Kieron Gillen keeps all of the characters engaging, if not sympathetic. And I do so love 000, the Evil C-3PO: 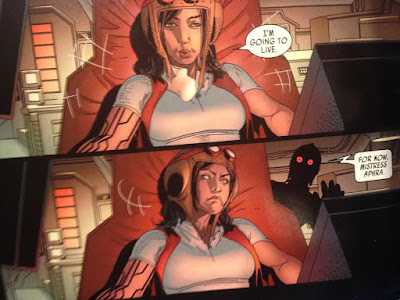 I'm sorry … but I'm gonna be the one who brings this up.

So you go into bookstores to read — and not pay — for the books, so that nobody involved gets compensated for their work?

To answer the first half of your question, yes, sometimes, particularly if it's a book I'd like to read but not buy or own and can't find in a library at the moment.

To answer the second half, I don't know? I didn't pay for any of these three. The first was from the library, the second was a review copy and the third was from the bookstore. The library bought the book, so the publisher got paid, but just one. The second was basically a business expenditure on the part of the publisher, giving away so many books in hopes for exposure, which might lead to more sales. I don't know how Marvel works with Barnes and Noble, but if they do it like comic shops, then Marvel already got paid when Barnes and Noble bought it from them, right?

That's how I end up buying my books on Amazon from B&N. They've already had the spine creased. From what I understand, this is the main reason Borders went under, they didn't learn to compete against B&N with Amazon early enough.

I've been in a B&N for an hour, there and in the attached restaurant, and for all that time one guy kept reading a mystery paperback. As a writer myself, I'd be more angry if the store threw my book out from a bent spine, because they couldn't record it as a sale, and it would therefore look bad for me. In the comics section, I often see people reading a trade, and that section is right next to the help desk.

Yeah, you're right, that's part of B&N's thing — that you can sit and read there, they expect it. Not something we can afford to encourage in the LCS.

And libraries, their own deal. Libraries are awesome, and I'm not just saying that. Not subject to this.

Mostly, I guess, it's just frustrating that as there's more and more demand for stories, those who make it have to struggle more and more to afford to do it. That "it's just me and I _really_ want to read it even though I don't want to pay" is becoming accepted.