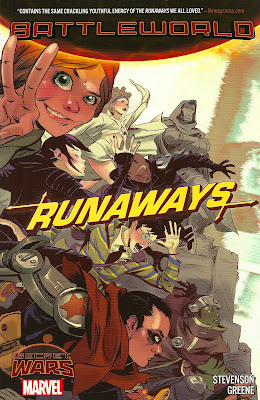 Each issue of each series tying into Marvel's massive, months-long Secret Wars event contained a pretty simple and straightforward one-page, four-sentence explanation of the premise behind it all. To make that short story long, essentially the entire Multiverse was gradually collapsing, and the superheroes who knew of the oncoming cosmic catacylsm were powerless to stop it. Dr. Doom seized the opportunity to do something (I haven't read the main Secret Wars series yet, sorry) that collapsed the remaining universes into a single, hodge-podge "patchwork" planet consisting of various "domains" that are, for all intents and purposes, their own little continuities. Relatively few people living in the various domains seem to realize they are part of a bigger, stranger world, and fewer still are able to move between those domains.

This was such a big deal that Marvel suspended the publication of pretty much their entire superhero line for months while Secret Wars played out, temporarily canceling all of their books (and therefore allowing for new #1s and relaunches afterwards) and replacing them on the schedule with a bunch of temporary miniseries and one-shots, the fact that the status quo would be both temporary and anything-goes giving the creators involved a welcome set of two-word directions: "Go nuts."

For a significant portion of 2015, then, the Marvel comics line reflected the nature of the Marvel Universe in-story, with sometimes seemingly randomly rebooted and remixed characters and concepts filling up just about everything outside of the main Secret Wars book. Marvel rather shrewdly launched many series bearing the titles of their most popular events and franchise-specific crossovers (Civil War, Planet Hulk, Age of Ultron Vs. Marvel Zombies, pretty much every X-Men crossover story since "Days of Future Past," etc); a pretty great bit of marketing, really.

It also allowed for the kinda-sorta revival of more off-beat and fan-favorite books missing from the publishing schedule for a long-time, like Runaways, the 2003-laumched, Brian K. Vaughan and Adrian Alphona-created series that did a few remarkable things for the Marvel Universe and line back then, including introducing a group of young and diverse characters long before that seemed to be a major priority for the publisher, and introducing a concept or characters that were actually new and were able to gain at least a little traction, something direct market readers don't really seem to want, and that the Big Two are set-up to discourage (If you're an inspired comics creator, why create a potentially profitable new character or team to gift to Marvel or DC, when you could retain the rights yourself by publishing your great new superhero concept elsewhere?).

The title had plenty of ups and downs over the past decade and change, and had cycled through several creative teams of varying levels of popularity and ability before being MIA for a few years (a few of the characters being dispersed to cameo here, or appear in a short-lived series there). Secret War now gave Marvel a good excuse to publish a new version of Runaways, and, perhaps most importantly, to assign it to some particularly gifted creators, at least one of whom seems like one of the last folks you'd expect to find writing a Marvel event series.

That would be Noelle Stevenson, co-creator of Boom's successful Lumberjanes series (and co-writer of its earlier issues) and the creator of Nimona (one of my favorite books of 2015). Honestly, considering her resume, this seems a little like a waste of her time and talents, at least from the perspective of a reader and fan of hers (From her point-of-view, however, it might actually be incredibly lucrative; if she's got a good royalty deal and these various Secret Wars collections do as well in trade as, say, the Civil War collections have, she could be making checks off this thing for a good long time).

Stevenson is, sadly, just writing, rather than writing and drawing (I'd love to see what her version of most of these characters look like), and her artistic contribution seems to have been limited to a single variant cover. She's paired with an incredibly talented artist, though, one of my favorites in the superhero business, Sandford Greene. His is a very loose, very dynamic style featuring slightly cartoony character designs and an incredible amount of energy in his line-work. His work is in the same arena as that of creator Alphona, and he is therefore a perfect match for this group of characters, this particular story and a team-up with Stevenson.

Just as so much else about Secret Wars' "Battleworld" setting is remixed and rejiggered, so too is the line-up and premise of Runaways. The originals were a small group of teens, each the children of supervillain parents who, upon realizing that their parents were actually evil, decided to runaway together. Of those characters, only one appears in the Secret Wars incarnation: Molly Hayes/Bruiser (Karolina Dean/Lucy In The Sky and Nico Minoru/Sister Grimm were both appearing in the pages of A-Force while this was being published, if you're wondering where some other original Runaways might have run off to).

The rest of the cast is pulled from all over the Marvel universe, but what they share in commons is that they are all super-teens and all have some form of a rebellious streak: The X-Men's Jubilee, Hulk/Herc supporting character Amadeus Cho, Cho's fellow Incredible Hercules cast-mate Delphyne Gorgon, Hulk character Skaar, Cloak and Dagger and Sanna Strand/Frostbite, who is apparently from something called X-Men 2099. Also appearing in fairly prominent roles are X-Man Pixie, Marvel's original teenage sidekick Bucky Barnes and Valeria Richards.

Almost all of the characters are reimagined in one way or another, generally in minor ways that don't affect their personalities much, like having the grown-up teens like Bucky, Cloak, Dagger and Skaar being contemporaries of the others, for example. Some of the reimaginings just seem random (like Cloak having Dagger's powers and Dagger having Cloak's powers*), but the most pervasive form of reimagination being asesthetic and, again, mostly minor (Amadeus wearing glasses, Dagger with dreads and a billowing white coat, etc). I particularly liked this version of Bucky, who has the smokey, make-up smeared eyes of the Captain America: The Winter Soldier version of the character.

Though only four issues long, Stevenson plotted the series as if it could rather easily have been a six, eight or 12 issue series; hell, it could have been an ongoing series. It takes about an issue and a half to set everything up, and about an issue to resolve everything. The actual running away part of Runaways is really only about 20-25 pages long, but set-up so that Stevenson and Greene could have inserted as many issues as they wanted to make/Marvel wanted to publish between #3 and #4. Given the simplicity of the premise, the richness of the "Battleworld" setting and the strength of the characters–the cast is almost exclusively fan-favorite characters, with clearly defined personalities–it's really kind of a shame this is such a short series.

It opens in The Victor Von Doom Institute for Gifted Youths, the Secret Wars answer to the sorts of super-schools that have proliferated in the Marvel Universe over the past few years (The Jean Grey Institute, Avengers Academy, The Future Foundation). Our heroes are a Breakfast Club of various types, who, due to an elaborate set of misunderstandings, all end up in detention together. That also means they all end up on the same "team" for some sort of weird final exam at the Institute. Thanks to Cho's gaming of the system, they learn that what appears to be a big Tron game is more of a Battle Royale, and that Valeria and Doom have been tricking the super-kids into killing one another until they winnow the school body down to the cream of the crop.

Our heroes do what the original Runaways did when they learned a terrible secret about their own lives: They run away.

That takes us to the running-away portion, where our heroes visit a few of the other regions/domains of Battleworld, like The Valley of Doom from the pages of 1872 and Weirdworld from Weirdworld. Eventually they realize they have to go back and set things right at the school, which they do. You can see then how easy it would have been to stretch this series, as there are a lot of domains on Battleworld, and these new Runaways could have ran to and through all of 'em, with the Bucky-lead upperclassmen of the Institute hot on their heels. 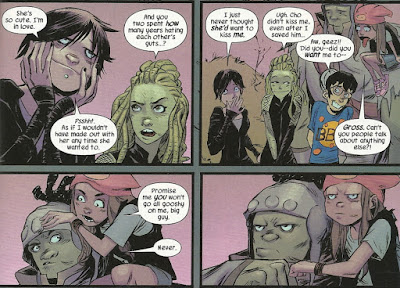 Instead, the story ends somewhat abruptly, but even still, it seems to promise continuing adventures, as a final form of the team–which lost and gained members due to deaths and changes in sides–all posing in a further adventures group-shot panel that practically promises a sequel. Given the temporary nature of Battleworld, though, it's hard to imagine how they would do that, although looking at that cast, I think Cho is the only one currently appearing in a post-Secret Wars series (The Totally Awesome Hulk), although I wouldn't be surprised if Jubilee pops up in one of the X-books.

To my surprise, this collection ends with Secret Love #1, the all-around excellent anthology one-shot that I originally wondered how and where Marvel would collect. Featuring five short stories, I assumed they would be divvied up between the titles featuring characters they are associated with. For example, the six-page story featuring the Battleworld version of Ghost Rider Robbie Reyes meeting the Battleworld version of Kamala Khan would seem to belong in the Ghost Racers collection, the three-page Squirrel Girl comic would belong in the first post-Secret Wars collection of Unbeatable Squirrel Girl, and so on.

Secret Love's inclusion here just seems completely random, like they weren't sure where else to stick it. None of the original Runaways characters appear in any of the stories, nor do any of the characters featured in the Secret Wars version of Runaways. (It's worth noting that there's no indication on the cover or the back-cover copy that Secret Love is even in this collection, just a bit of fine print in the corner of the back cover noting that that the book is "Collecting Runaways (2015) #1-4, written by Noelle Stevenson and illustrated by Snadford Greene, plus Secret Wars: Secret Love #1."

And it's not very big fine print, either.
Regardless, both Runaways and Secret Love are fantastic superhero comics, evincing a great sense of humor, likable characters being generally likable and all-around great art. It's a pretty good way to spend $15.99 of your comic book budget.

*Scratch that. Apparently Cloak and Dagger somehow switched powers in the "real" Marvel Universe prior to Secret Wars. See the first comment for the correction.
Posted by Caleb at 7:56 PM

No, that actually happened in regular continuity - it became their new status quo in Nick Spencer's Spider-Island: Cloak & Dagger mini-series a few years ago.

Really? Huh. Well, thanks for the clarification. I read two big, fat trades of Spider-Island, but I don't think there was a Cloak & Dagger story in either of them and, if there was, I obviously forgot it.