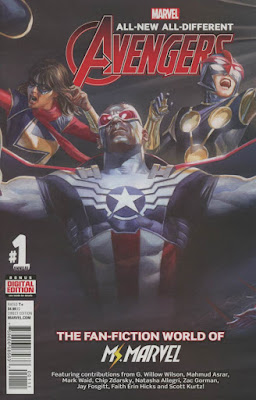 All-New, All-Different Avengers Annual #1 (Marvel Entertainment) One of the several ways in which G. Willow Wilson immediately established Kamala Khan as a sort of superhero super-fan, not unlike any other reader of Marvel comics, which sort of took who to a whole new level as a reader-identification character, was by having Kamala regularly refer to her superhero fan-fiction. This she wrote before becoming a superhero herself, of course, although she apparently still continues to write it.

What we haven't seen in the pages of Wilson's Ms. Marvel yet is the comic book performance of that fan-fiction, not as fully as we've seen, say, Nancy Whitehead's Cat Thor fan comics in the pages of Unbeatable Squirrel Girl (Loki spending much of an adventure with Thor and Squirrel Girl in the form of Cat Thor just to mess with his brother remains a highlight of that comic book series for me). That changes here, in the All-New, All-Different Avengers Annual (Oh my God, please just abbreviate it to a Avengers already!).

The cover is just a completely generic Alex Ross cover of three members of the team, only one of whom plays any significant role, but at least there's a large blurb along the bottom promising "The Fan-Fiction World of Ms. Marvel," the last word in her logo, and a list of the contributors, which include Wilson herself and A-N,A-DA creators Mark Waid and Mahmud Asrar.

I still think this is a weird (well, dumb) place for this story to show up, rather than in a Ms. Marvel annual, but I suppose there's a marketing reason for its appearing under this title instead of the more natural place. It sure is a lot of fun, regardless.

The premise, delineated in a framing sequence by Wilson and Asrar entitled "Internet Randos," which features Kamala returning home to check how many likes her Avengers fan-fiction got, and discovering that she's now big enough a hero to have people writing fan-fic about her, like "Ms. Marvel and The Teenage Love Triangle From Space," illustrated by an image of Spider-Man Miles Morales and Nova at her feet. Against her better judgement, she reads on, and this is what she finds:

"The Once and Future Marvel," written by Mark Waid and drawn by Chip Zdarsky, in which Ms. Marvel and Captain Marvel team-up to fight Skrulls in space and deliver such stilted dialogue that it's pretty clear Waid did a little research into the world of fan-fic (the poor man). It's pretty much a straight parody, but when Marvel's original Captain Marvel (you know, the man one) reappears, snatched from the time stream just before his death (as kinda sorta happened once already, but turned out to be a trick, and also kinda sorta happened to Barry Allen in a Flash story Waid himself wrote, but also turned out to be a trick). It's funny stuff, particularly because Waid manages to hold off on the Internet politics until the very last page, when it really becomes a delight.

"The Adventures of She-Hulk," by Natasha Alleri (who drew the charming sixth issue of Patsy Walker, AKA Hellcat), doesn't really seem to fit here conceptually, as it would have to be a fan comic rather than fan-fiction, and isn't too terribly Avengers-y. It is darling and it is hilarious though, and is basically She-Hulk starring in a modern update of "Duck Amuck," only the unseen tormenter is actually just a pencil that hangs out around her.

"Up Close and Fursonal," by writer Zac Gorman and Jay Fosgitt, sounds like furry stuff, but is probably closest to something like Peter Porker, The Spectacular Spider-Ham or the original Captain Carrot comics. Or, I don't know, is that what Zootopia is, basically? It's a Marvel Universe where everyone is an animal, and animal puns abound. It stars Hss. Marvel (a snake, but with arms!) and The Spectacular Spider-Mole (Miles, not Peter).

It's a battle between the two, although we pull out to reveal the nature of that battle, and it ends with the pair in a coffee shop full of superheroes, Squirrel Girl and her army of squirrels eating "macarons," which I assume are "macaroons." Are there different spellings? Is "Macaron" Canadian for "macaroon"...?

Finally, Scott Kurtz writes and draws "An Evening With Ms. Marvel: A True Story." It is not a true story, but it's pretty funny, and, like Waid's first story, is the one that reads most like true fan-fic. 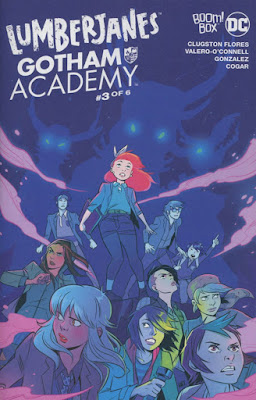 Lumberjanes/Gotham Academy #3 (Boom Studios) As Chynna CLugston Flores, Rosemary Valero-O'Connell and Maddi Gonzalez's unlike crossover reaches the mid-way point, we finally get a pretty thorough explanation of what exactly is going on with that creepy lodge in the weird woods around the Lumberjanes camp, and learn that the lady who seems to be in charge of capturing imprisoning everyone in a weird recreation of a sweet sixteen party from the 1980s may be a victim of sorts herself, as she can't see what everyone else can (like the floating cloak-and-animal skull creatures).

I like Valero-O'Connell's pencil art, inked by Gonzalez and colored by Whitney Cogar, more and more each issue. I think it took a bit of adjustment precisely because it was so unlike the art of either Lumberjanes or Gotham Academy up to this point, but at this point I'm used to it, and really digging the degree of expression she brings to the characters, as well as all the great 1980s fashion everyone is wearing...mostly against their will. 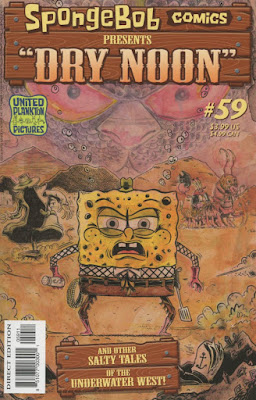 SpongeBob Comics #59 (United Plankton Pictures) This month's theme is Westerns, and for the cover story "Dry Noon," editor Chris Duffy has lined up a contribution from Chuck Dixon and artist Raul The Third. The somewhat silly story involves Mister Krabs taking SpongeBob to the driest part of the ocean in order to procure a secret ingredient for his Krabby Patties: Black salt. And what makes black salt so salty? That's the well-executed gag. The art is pretty great, offering one of the many, many instances in which this book diverges wildly from the style and character designs of the cartoon its based on, and its colored so as if the paper, like the cover, looks old and beat-up, as if maybe it had somehow survived from cowboy times.

Most of the other stories are somehow Western related as well, and these include contributions from Maris Wicks, James Kochalka, Corey Barba and Gregg Schigiel, Jed Alexander and Sam Henderson and Greg Benton. 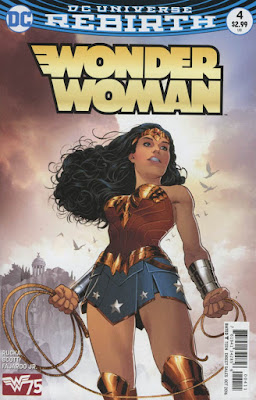 Wonder Woman #4 (DC Comics) This is the second chapter of Greg Rucka and Nicola Scott's "Year One" origin story of Wonder Woman, and, as she is still on the island but about to leave, this chapter centers on ticking off the boxes that have to happen: What to do with Steve, who will return him to Man's World, how they will decide, what she'll wear, etc.

Because of this, it is mostly a predictable march through expected elements, only interesting in the little ways in which it diverges from past stories. Here, for example, Hippolyta doesn't forbid Diana from competing to be the island's champion, but is resigned to the fact...just as she knows her daughter will almost certainly win (She does). I liked this version of the Amazons' crafting of Wonder Woman's costume, based on the symbols found on the uniforms of the dead soldiers; even that's not original to this telling, but it's executed well, as is the wrinkle with the bullets-and-bracelets.

It's fine then, but it should get more interesting in the next few chapters.

Oh, and it needs more kangas. This version of Themyscira is basically just a Bronze Age society with some magic stuff, not the high fantasy/sci-fi mash-up world of William Moulton Marston and H.G. Peter, or, more recently, Grant Morrison and Yanick Paquette.
Posted by Caleb at 11:21 AM

Macaroons are an English biscuit made with coconut, which are quite chewy. Macarons are a very light and fragile French biscuit made from ground almond instead of flour, in all sorts of different flavours.

You learn something ne every day! I have to admit, that while I greatly enjoyed Wonder Woman and that beautiful beautiful Nicola Scott artwork, the Avengers/Ms. Marvel fan fiction issue was simply hilarious.