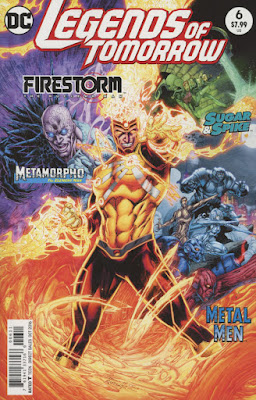 Legends of Tomorrow #6 (DC Comics) This book was especially welcome this week, when there was only one other book in my pull-list (I added Superf*ckers Forever too late, alas; hopefully it will arrive next week). If you're only going to have two comic books to read on a Wednesday afternoon, it's better if one of them is actually four comic books in one, after all.

This is, sadly, the last issue of Legends of Tomorrow. If the fact that there's no #7 in next month's solicitations weren't clue enough, the fact that all four stories seem to resolve themselves with great finality here drives the point home (although, it should be pointed out, half of them actually end with the words "The Beginning" or something to that effect).

As I've said before, I really enjoy the format of this book, and, especially the price point. I liked the four features in degrees that varied wildly (from "Completely Uninterested" to "This Is Mediocre, But I'm Curious" to "Say, That's Pretty Good" to "This Isn't That Bad"), which, given the super-value price-point (at $7.99/80-pages, it's like four $2 comics) turned out to be enough for me to buy all six issues. (If you bought none of them, you didn't miss much; just pick up the upcoming Sugar & Spike trade and you're golden, really.)

Therefore, I wouldn't mind another six issues featuring four–or maybe just three?–new features, preferably ones that feature characters from the TV show that the book is named after (Maybe keep Sugar & Spike, and add a Rip Hunter feature–with guest-stars from different time periods–and, I don't know, Hawkman & Hawkgirl and Captain Cold and/or The Rogues...? I'd suggest The Atom, but he seems fairly screwed up by the New 52 reboot.) Or, hell, give it a different title completely, and it can function pretty much like this: A way to re-introduce a character (Metamorpho), greenlight an otherwise un-greenlight-able series (Sugar & Spike), provide another arc of a canceled book (Firestorm) and/or try out frequent guest-stars in their own feature (The Metal Men).

As I've only took one other book home from the shop tonight, I guess we can take these one by one.

First, there's the Firestorm feature by Gerry Conway, Eduardo Pansica and Rob Hunter. It...actually, I have absolutely nothing to say about it. It was readable, which is more than I can say for some DC comic books. I think the character suffered during the New 52-boot (remember, he was coming off of a high-profile Firestorm: Rebirth-like story in the Geoff Johns-written Brightest Day and was in the best shape of his post-80s career when DC hit the reset button). Here Conway essentially restores the character to his classic composition, without completely jettisoning Jason. Still, it seemed like a 120-page status quo readjustment more than anything else, and was more character-driven than a showcase of what makes the character so neat. That would be fine if the character's weren't so flat and generic but, well, they were. The art was okay, but not anywhere near good enough to transcend the story itself. This one ended with a splash page, and the words "THE BEGINNING" in the lower right-hand corner.

Up next is Aaron Lopresti and Livesay's Metamorpho. This was basically another new origin story for Metamorpho, a character who doesn't need an new origin story, or even an origin story: He was pretty perfect as is, and, I was a little surprised upon reading Showcase Presents: Metamorpho how timeless those original stories were. Lopresti, who wrote and penciled, tried to update things in a way to make them more 21st century, like giving Sapphire a doctorate and a more active role, but he also made everyone occupy a similarly gray moral area that doesn't really suit an adventure character whose powers are the Periodic Table and whose supporting cast includes an unfrozen caveman named Java. This chapter ends with Sapphire seemingly transformed and dead, and Metamorpho about to murder her father in revenge. Hooray...? It actually ends with the words "The End." If we see Metamorpho in the new Rebirth-iverse, maybe we'll just pretend none of this ever happened...?

Then it's Keith Giffen and Bilquis Evely's "Sugar & Spike," the reason to read this series at all. Evely's the MVP of this book, and a rising star; I hope DC finds something really great for her to do next. Maybe Batman? That book really should have a female artist on it at some point, right? Giffen has scripted his sixth and final chapter in this Sheldon Moldoff's-baby-characters-from-a-gag-comic-are-adult-Private Investigators-specializing-in-superheroes-for-some-reason series without ever justifying using Sugar & Spike and not, like, anyone else, up to and including original characters. This issue focuses on the Legion of Super-Heroes, and mainly involves a pile-up of their time-travel devices as various representatives of various incarnations of the team appear in order to stop something from happening, and all end up arguing with one another. It's funnier than most of the previous installments, in large part because the nature of the Legion means the feature's hands-off approach to continuity works just fine, in larger part because little of Giffen's time is spent on making Sugar a horrible shrew and in larger part still because it gives Evely so much room for visual gags, the best being the effect of flight on Sugar's hair...although there's something to be said for the look on the original Saturn Girl's face when she sees what a later Saturn Girl is wearing. This one ends with a "The End" as well.

Finally, there's Len Wein, Yildiray Cinar and Trevor Scott's Metal Men feature, which includes an introduction of a villain and an editorial box reading "See the last incarnation of BLACKHAWK for details." Yeah, I'll be sure to hit the back-issue bins for issues of the almost-immediately-canceled New 52 Blackhawk book right away. Anyway, that character was behind the various troubles that Will Magnus and his Metal Men have been through over the course of the last five guest-star-spangled installments. In this final one, both sets of Metal Men team-up to take on Chemo, all of them dying in the process of defeating him. Which is fine; being destroyed and being rebuilt is pretty much their thing. Magnus is able to rebuild his entire team, but only one member of the second set of Metal Men–Copper, who I assumed would join the originals before this was all over (as she was introduced in a previous Metal Men mini-series). Sadly, the new Metal Men designs are even worse than they were throughout this series, but hopefully these bodies will get destroyed pretty quickly and then can assume newer, less terrible forms. This one ends with the words "Only The Beginning."

And that's that. Farewell Legends of Tomorrow; I'll miss you! 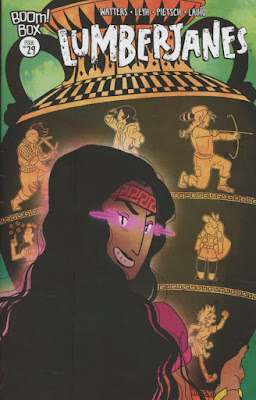 Lumberjanes #29 (Boom Studios) Thus begins a weirdly continuity-heavy story arc in Lumberjanes, in that it refers back to several things that have previously occurred in the series. Perhaps not in a You won't be able to understand this comic book if you didn't read those previous issues kinda way, but in a way that seems fairly unusual for this title, which hasn't deviated too very far from it's premise of "Girls at a camp get into hijinks involving monsters and strangeness in the woods."

The villain of the first arc has returned, and an enemy of hers has attacked one The Zodiac Cabin (which now includes former Scouting Lad Barney, the first-ever male Lumberjane), and our heroines from Roanoke Cabin must ally themselves with their former enemy to save Barney and their other fellow 'janes. Because the backdrop involves Greek mythology, it provides writers Shannon Watters and Kat Leyh to discuss family, and how it pertains to one of the 'janes in particular, which had me trying (and failing) to remember the details of that one issue in which we saw all the girls getting dropped off at the camp by their parents.

Yeah, I have to say the worst part of the whole series was the reveal of the villain behind the Metal Men story. That was a complete "who on earth is that?" reveal (and I thought I read the Blackhawk series in trade many many months ago and that was completely forgettable.)

I would agree with all your other comments completely (Firestorm was just a placeholder, Metamorpho was unnecessary, but looked great -- really nice art, and Sugar and Spike was the best part of each issue.)

I'd like to see more of these type of anthologies as well. I'd be surprised if they come back under "Rebirth", though.